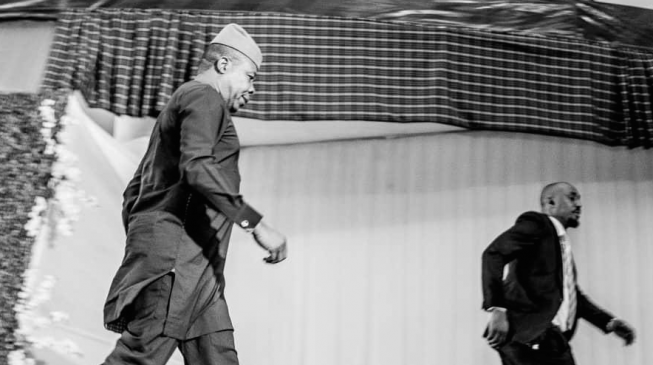 23:05 2020
Print This Article Share it With Friends
👤by Mansur Ibrahim  0 Comments
Advertisement

The supreme court on Tuesday sacked Emeka Ihedioha as governor of Imo state, affirming Hope Uzodinma as winner of the March 9 election.

In a unanimous decision, a seven-man panel held that Ihedioha did not win majority of votes cast in the election.

Rochas Okorocha, former governor of Imo, was among those who hailed the apex court’s judgment.

“Today, my HOPE in the Nigerian state has been further strengthened. The Supreme Court has delivered justice to the good people of Imo state and reinforced our belief that illegality has no place in our polity. I congratulate Governor Hope Uzodinma wholeheartedly,” Okorocha tweeted.

Today, my HOPE in the Nigerian state has been further strengthened. The Supreme Court has delivered justice to the good people of Imo state and reinforced our belief that illegality has no place in our polity.

A Twitter user, Arinze Odira, said contractors who borrowed money under Ihedioha’s administration should brace up.

“If Emeka Ihedioha gave you a contract and you borrowed money from the bank to finance it, brace yourself, you might be in for a very long thing.”

Below are other reactions:

If Emeka Ihedioha gave you a contract and you borrowed money from the bank to finance it, brace yourself, you might be in for a very long thing.

This is one of the issues with doing business in a frontier market or an emerging economy where politics determine everything.

The same revered & exalted S/Court of Nigeria that nullified APC’s victory in Zamfara State has affirmed the victory of APC in Imo State. That is judicial neutrality at its VERY BEST. I quickly dropped this here before our usual bad losers begin to cry foul & change the narrative

Father Mbaka said Buhari will defeat GEJ and be President for 8 years in 2014…He also said Emeka Ihedioha would be sacked and Hope Uzodinma will become Governor….Ladies and Gentlemen, Fear Father Mbaka!!!

The people that relocated to Owerri to start a new career and life. Someone picked up his appointment letter as DG of an Agency just yesterday. They are the ones I'm feeling for. The big shots will be fine. But those who built their 'hope' on Ihedioha.

So Justice Tanko a Muslim Fulani man plotted with Reverend Father Mbaka a Catholic Christian priest to remove Ihedioha an Igbo man and replace him with him an igbo man to placate Satan Buhari…. 🤔? Seems legit. https://t.co/nve3EvhI0W

Ihedioha has been removed by the Supreme Court. Okay, cool. But I need explanation as to why they skipped the next two and made Hope Uzodinma Gov elect. Does anyone know? pic.twitter.com/yXoS1I2vpo

In the end, it is Hope Uzordimma that will save Okorocha from Ihedioha….

To God be the glory 🙏

For Democracy sake, I think Nigerians deserve to know the basis/bases behind the Supreme court judgement to replace Ihedioha the supposed winner with Uzodinma the 3rd runners up…

Maybe @inecnigeria should be jettisoned…

Father Mbaka, Hope Uzodinma, Tanko, The Supreme Court and the Ihedioha Crisis is proof that the APC will be around for a very long time…and that's pathetic 😕😕😕 pic.twitter.com/1L1qfGDXlm

Imagine all the people that had told their "clients" that Ihedioha was their uncle, that the contract they were working one was sure. LOL

This jankara judgement of the Supreme Court led by CJN Tanko Muhammad speaks loudly to Nigerians.

Your Judiciary & legal system is dead.

How can you declare Hope Uzodimma who came 4th winner over the rest of the field including Emeka Ihedioha?

Ihedioha came, instead of working, he started demolishing the work done by his predecessor. Now he has been DEMOLISHED.
Inside life.

I won't join the bandwagons that tend to taunt the #APC given the Supreme Court verdict establishing the victory of Hope Uzodinma against Emeka Ihedioha of PDP. A copy of the judgment will suffice in knowing how a hitherto third position candidate won the election.

So all that nonsensical attitudes Ihedioha has been doing was for nothing! He now must vacate the seat for APC, even tho all politicians are from same womb but I feel for the guy … cos of his stubbornness

JUST IN: Supreme Court sacks Ihedioha of PDP as governor of Imo State, declares Senator Hope Uzodinma winner of election. Hope Uzodinma is now the governor-elect pending his swearing-in. This is the first time that the Supreme Court has nullified election in an election petition.

The Supreme Court is not Supreme. GOD is Supreme.

Barely two weeks to his regime as governor of IMO state ,emeka ihedioha started demolishing his predecessor's project all in the name of politics. Now his predecessor will be laughing while he will be crying foe. pic.twitter.com/MinV0WJsE1

Would someone please explain to me how a candidate that came 4th in the election suddenly became the winner? The Supreme Court has a lot of explaining to do! The people of Imo did not deserve this nonsense!

Father Mbaka Why !? I think it is just guess work tho,nothing about prophecy. Catholics will enjoy the bragging rights over these new generation worshippers 😄now. I have never seen any of your popular pastors get their predictions right tho. Ronaldo Mbaka the Lucky Exception. pic.twitter.com/QdYXp2JnvR

Some of you are either ignorant or mischievous.

Zamfara was a pre election matter that involved two factions of one party, APC

So Many IGBOs Hate Father Mbaka Because He Talks The Truth At All Times.

He Told @PeterObi That He And @atiku Would Be Disgraced,

Did It Not Happen? pic.twitter.com/ZOvxYMCXKd

Father Mbaka Should take over as CAN President Now..

USA coming to Rev Father mbaka church to hear who would win US 2020 election. pic.twitter.com/eYIsmpTLyo

Hahahahahaha all of una wey troll and badmouth Father. How market ? pic.twitter.com/41IGN5UglX

Rev father Mbaka prophesy when he said the candidate APC Buhari will defeat Goodluck PDP candidate in 2015, it came to past, now again he foreseen this Supreme Court judgment, that man is Real. Catholic family are lucky to have him as a priest

TWITTER @thecableng
Copyright 2020 TheCable. All rights reserved. This material, and other digital content on this website, may not be reproduced, published, broadcast, rewritten or redistributed in whole or in part without prior express written permission from TheCable.
Tags
emeka ihediohaHope UzodinmaImoSupreme court
Advertisement