It is immoral to vote Jonathan, Buhari in 2015 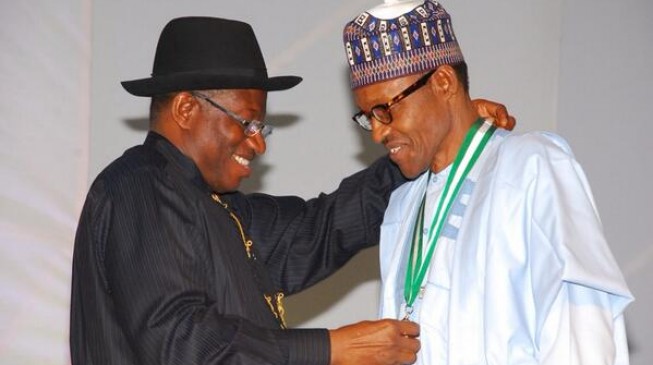 09:47 2014
Print This Article Share it With Friends
👤by Contributor  3 Comments
Advertisement

It is disconcerting, no less embarrassing, that the world’s most populous black nation is yet again stuck with the proverbial devil and the deep blue sea in the build-up to its presidential election in 2015.

It is a huge shame that even the intellectuals have helplessly resigned to the virtue-insolvent characters thrown up by the two heavy weight political parties, as though arguing for a credible third option is sacrilegious. For what it’s worth, even respected human right activists, social (media) critics, and highly intelligent youths are fast sounding like a broken record, passionately defending the indefensible.

My position is clear: Goodluck Jonathan and Muhammadu Buhari do not deserve my vote or yours in the coming election. Hard as family and friends try to sell either to me as the messiah ordained to take us to Eldorado, I cannot but wonder why it is not crystal clear to them that both are bad markets. Hard as noisemaking party faithful try to disparage the opposition’s candidate, I cannot but ponder on why playing the ostrich has shamelessly become a pastime to them.

I would not bother you with Goodluck Jonathan’s lackadaisical attitude to clamping down corruption or his romance with characters that should be serving time in a maximum prison or perhaps should by now have faced the firing squad. Neither would I bother you with his many acts of indiscretion and poor leadership aptitude and attitude.

On the other hand, to attempt to chronicle Muhammadu Buhari’s gross human rights abuse as military head and his arrogant dismissal of any wrongdoing as an aspiring leader in a democratic regime would amount to disservice to the intellectual acumen of Professor Wole Soyinka, who has expertly expounded on same in articles in the public domain. I presume, to Buhari’s cronies and supporters, dancing awilo on the graves of Lawal Ojuolape, Bernard Ogedengbe, and Bartholomew Owoh who were executed in cold blood by Messiah Buhari is an act worthy of thunderous applause. To quote Soyinka, “Since leaving office, he (Buhari) has declared in the most categorical terms that he had no regrets over this murder and would do so again.” Sai Buhari!

For me, we don’t have to go that far to uncover the unsuitability of both candidates for the highly exalted office of the president. That we have been unfortunate to have one of them for six years is no reason why we must perpetuate folly. And yes, that the other singlehandedly amassed an intimidating number of votes in the election gone by is no reason why we must not tell his gullible supporters that their hero’s credibility is zero.

Section 14 (2) (a) of the 1999 Constitution of the Federal Republic of Nigeria states that “sovereignty belongs to the people of Nigeria from whom government through this Constitution derives all its powers and authority,” while Paragraph (b) is equivocal in stating that “the security and welfare of the people shall be the primary purpose of government.” It was not by chance, I believe, that security is placed before welfare in the order of what should preoccupy a responsible government’s concern; for a government that cannot guarantee the security of its people can only provide a surreal welfare for them. Indeed, a government that cannot provide security for his people has no business staying in power since the primary purpose why the people relinquished part of their liberty to the government in a social contract in the first place would have been defeated.

Under the nose of Goodluck Jonathan, Grand Commander of the Federal Republic of Nigeria, an estimated 5,000 civilians have been killed in terrorist attacks occurring mainly in northeast, north central and central states of Nigeria. Besides, more than 500 women and children have been reportedly kidnapped, among whom are the 276 Chibok girls that are yet to be rescued from their abductors. This is beside the many other criminal activities that have escalated in other parts of the country since his assumption of office.

It is convenient to say terrorism is intractable and cannot be easily subdued. It is very convenient to say Jonathan’s political detractors who threatened to make Nigeria ungovernable if he returned to power have been frustrating all efforts to curb the menace. The truth, however, is that Goodluck Jonathan has so far paid lip service to stamping out terrorism and insurgency in Nigeria. Who doesn’t know that except a tree is cut from the root, all efforts at cutting off its branches are but superficial? If Nigeria’s president in a statement could categorically validate his knowledge of the brains behind the wanton destruction of lives and property, who he affirmed as being part of his government, what further evidence do we need to disclose the insincerity of a leader? A president that would hesitate to expose and prosecute the sponsors of terrorism, [but rather send under-armed soldiers to take out Boko Haram foot soldiers] in order to protect his political interest should without batting an eyelid be sent into political oblivion by the electorates.

For Muhammad Buhari’s bootlickers, the fact that he is not president does not impose any obligation on him to suggest strategies to halt the Boko Haram nuisance. Assuming, without conceding, that this is the case, what has been his stance as an elder statesman and former military head on the carnage and bloodletting that has almost swallowed the nation?

Muhammadu Buhari could only stand by and watch as his devotees unleashed terror on innocent Nigerians after his loss at the 2011 presidential poll. I am not aware that he ever commiserated with the families of the deceased or condemned in unmistaken terms the barbaric actions of his supporters. Rather, he had the audacity to go ahead on May 14, 2012, to say to his bloodthirsty supporters that “if what happened in 2011 should again happen in 2015, by the grace of God, the dog and the baboon would all be soaked in blood!”

Muhammadu Buhari, to my knowledge, never concurred to pronouncing Boko Haram a terrorist group but would rather see the devilish sect as “our people” who are being oppressed by the military boys. I carefully perused his acceptance speech as the All Progressives Congress (APC) presidential candidate and all I see is one sinister speech full of guile and hypocrisy. While suggesting that the PDP has led Nigeria into “the current state of insecurity, poverty, sectarian divide and hopelessness,” the prevailing insecurity challenge and what he hopes to do about it was conspicuously missing in his five/six-point pledges. I wonder how he intends to implement a national infrastructure master plan, improve agricultural yield, and even stamp out corruption if he is overwhelmed by the same mass of terror that Boko Haram visited Goodluck’s government with. Does Buhari know where the switch-off button of insurgency in Nigeria is? How could one boast of astronomical development if insecurity remains unattended to? It is either Buhari is self-delusional or irredeemably impious.

He is the latter if he knew all the while the solution to the crisis but decided to keep mum. Why did Buhari have to wait till he got the ticket of his party before condemning “unreservedly and with every strength in me the recent terrorist attacks in Kano and Jos”? Such statements, rather than show him as concerned, smirk of hypocrisy. He possibly did not mean it when he said in his acceptance speech that “We will be a compassionate government,” for it is visible to the blind that he doesn’t know the colour of compassion.

I am left to wonder what the worth of a life is to the duo. Do they really care how many Nigerians are hacked down in the most bizarre manner by the demonic sect as long as they secure political power? Are these so-called leaders human at all? Can they possibly give up an ambition, though alluring and appealing, to save even a single life? Can they possibly rescue Nigerians from obliteration even if the opposing party would as much get the credit?

I submit that it is time we stopped massaging the idiocy of the political class. If the heavy weight political parties have decided to set charlatans on the loose, must we credulously embrace them for what is worth? Has sovereignty stopped being the preserve of the people? Can the best man for the job in an obscure party not be popularized by all and sundry who care about their future? I will not be party to settling for the lesser of two evils, for when you settle for the lesser of two evils, evil still invariably wins.