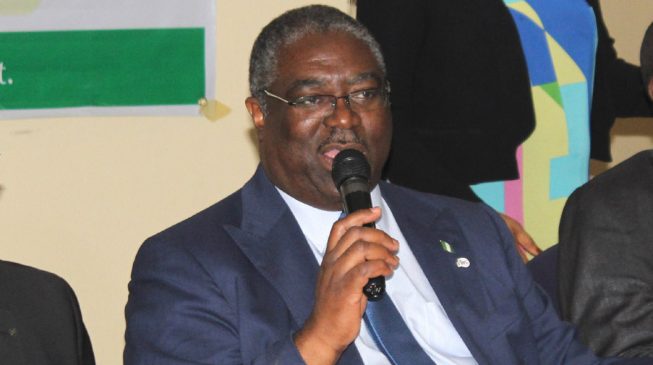 19:12 2019
Print This Article Share it With Friends
👤by Contributor  0 Comments
Advertisement

Ganiyu Yekinni struggles with his commercial motorcycle on the dilapidated section of the Lagos-Abeokuta expressway. It’s a clammy Thursday morning and Mr Yekinni, a staffer at the Ogun State Hospital Board, is on his way to work. Although he is duty-bound to contribute to saving peoples’ lives at the Otta General Hospital, he says that the relatively poor pay he receives as a civil servant has made the hospital job quite tiring for him and other junior colleagues. It’s the first half of October 2019 but Mr Yekinni would not mind having a salary advance already.

“We save lives but our own life is not even worth saving,” he tells me in Yoruba upon being probed at the Toll Gate end of the Lagos-Abeokuta expressway. “Already, I have huge debt to settle yet we are still in the beginning of the month. This is the kind of life I and many civil servants live. It’s sad.”

In 2011, the current N18,000 minimum wage was approved by the Nigerian government. But in 2019, eight years after the approval, except for about half a dozen state governments, many states in Nigeria still cannot afford to pay the N18,000 minimum wage. While workers earn far less in some states, others are owing workers huge salary arrears. Mr Yekinni works with Ogun State government and earns N18,000, he says, then expresses fear over the looming increase in the cost of goods and services due to the proposed increase in sundry taxes. “Despite all of this, our lawmakers are planning to waste scarce resources on new vehicles,” he adds, his voice low-pitched and faint.

Here, the civil servant speaks of the proposed plan by Nigerian lawmakers to spend N5.5 billion on official cars of members of the parliament.

Globally, the growing gap between the rich and poor is preventing millions of people from escaping poverty. In 2018, according to Oxfam, the 3.8 billion people who make up the poorest half of the world saw their wealth decline by 11 percent, while the fortunes of billionaires rose 12 percent. Invariably, 1 in 10 people around the world live in poverty and struggle to survive. With extreme inequality comes endemic poverty, both of which the world can avoid through strategic taxation.

Development analysts opine that leaders of the world’s richest countries could raise more money to fight poverty by increasing tax on wealthy people. But this has been made most difficult due to tax evasion and avoidance, often orchestrated by multinationals and nouveau riche. In Nigeria, between 2016 and 2017, PREMIUM TIMES published huge number of documents in the Panama Papers and the Paradise Papers investigations which exposed how multinational companies and rich individuals seek to increase their profits by storing them offshore and avoiding paying taxes in their countries. Many notable Nigerians featured in the award-winning global investigations. In 2018, the International Monetary Fund (IMF) noted that African countries lose more than $50 billion each year to illegal financial outflows, mostly through tax avoidance and evasion. 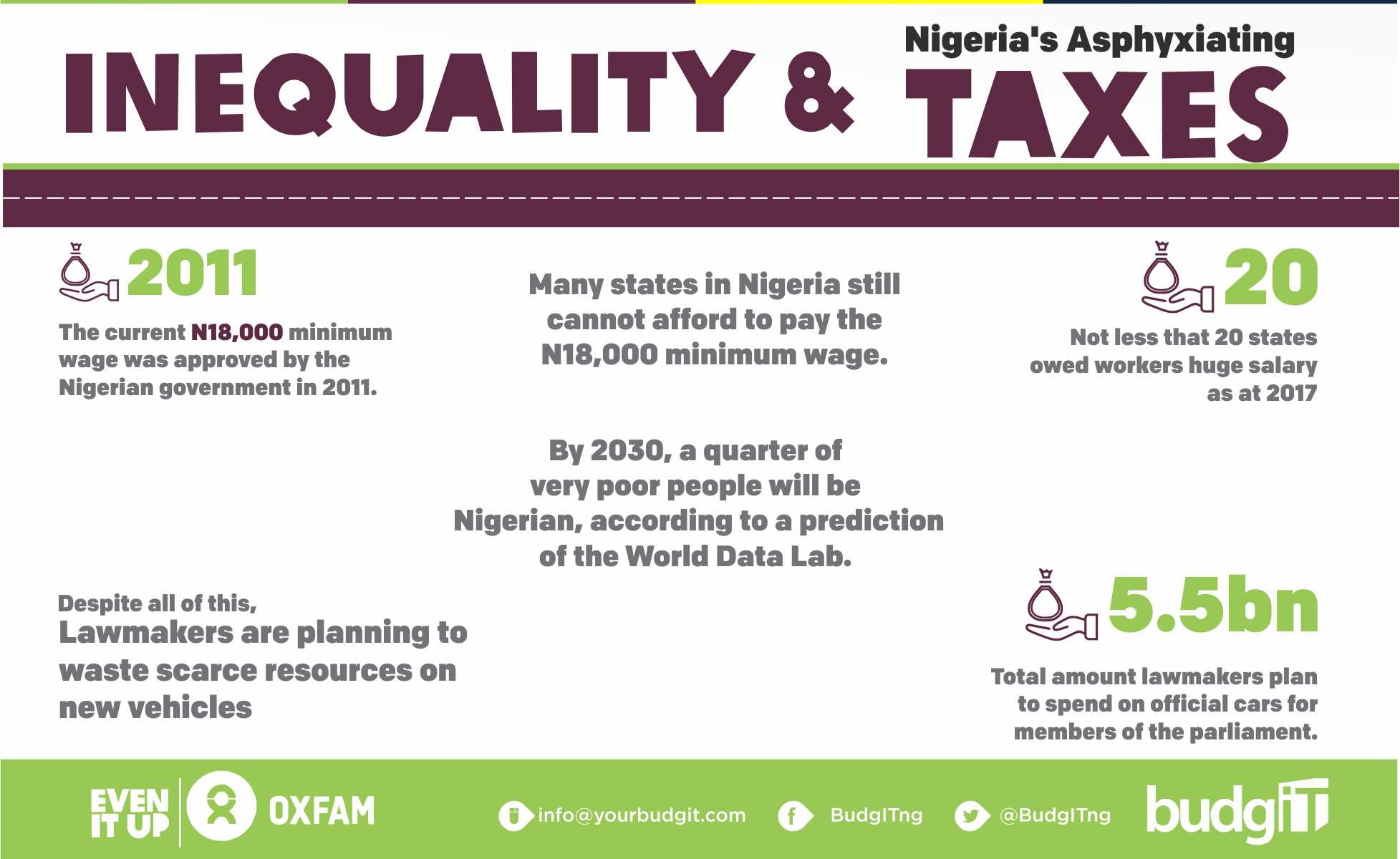 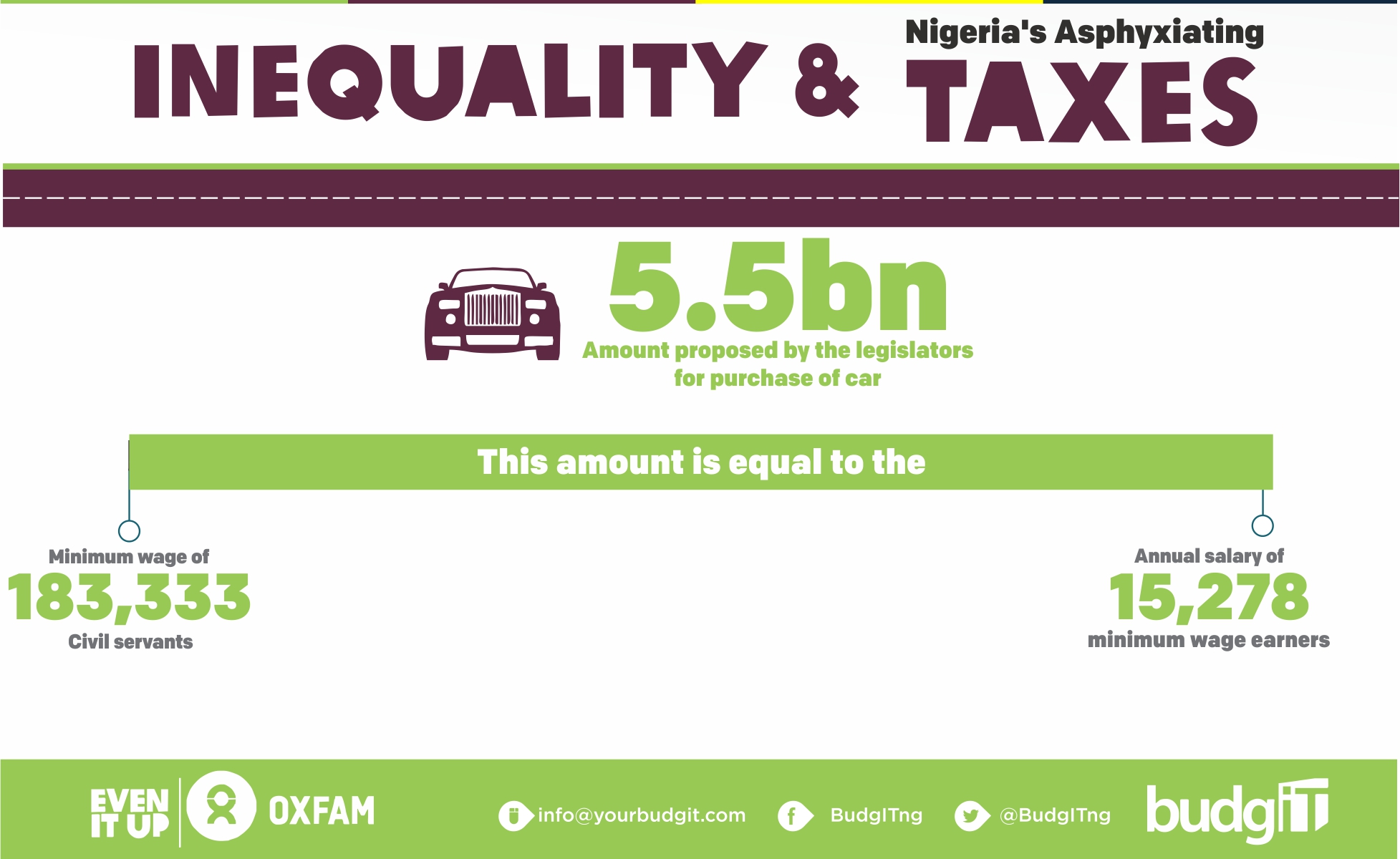 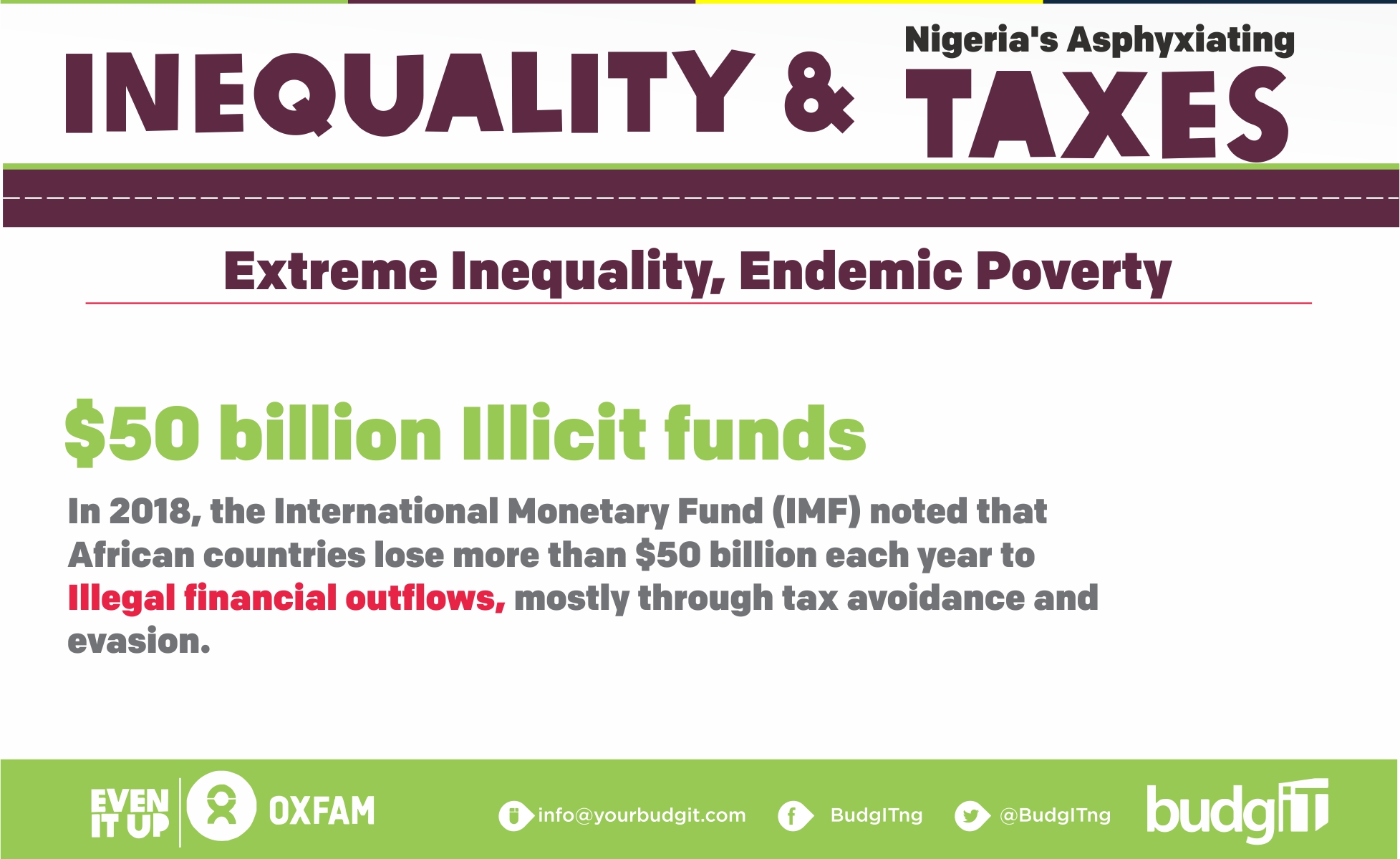 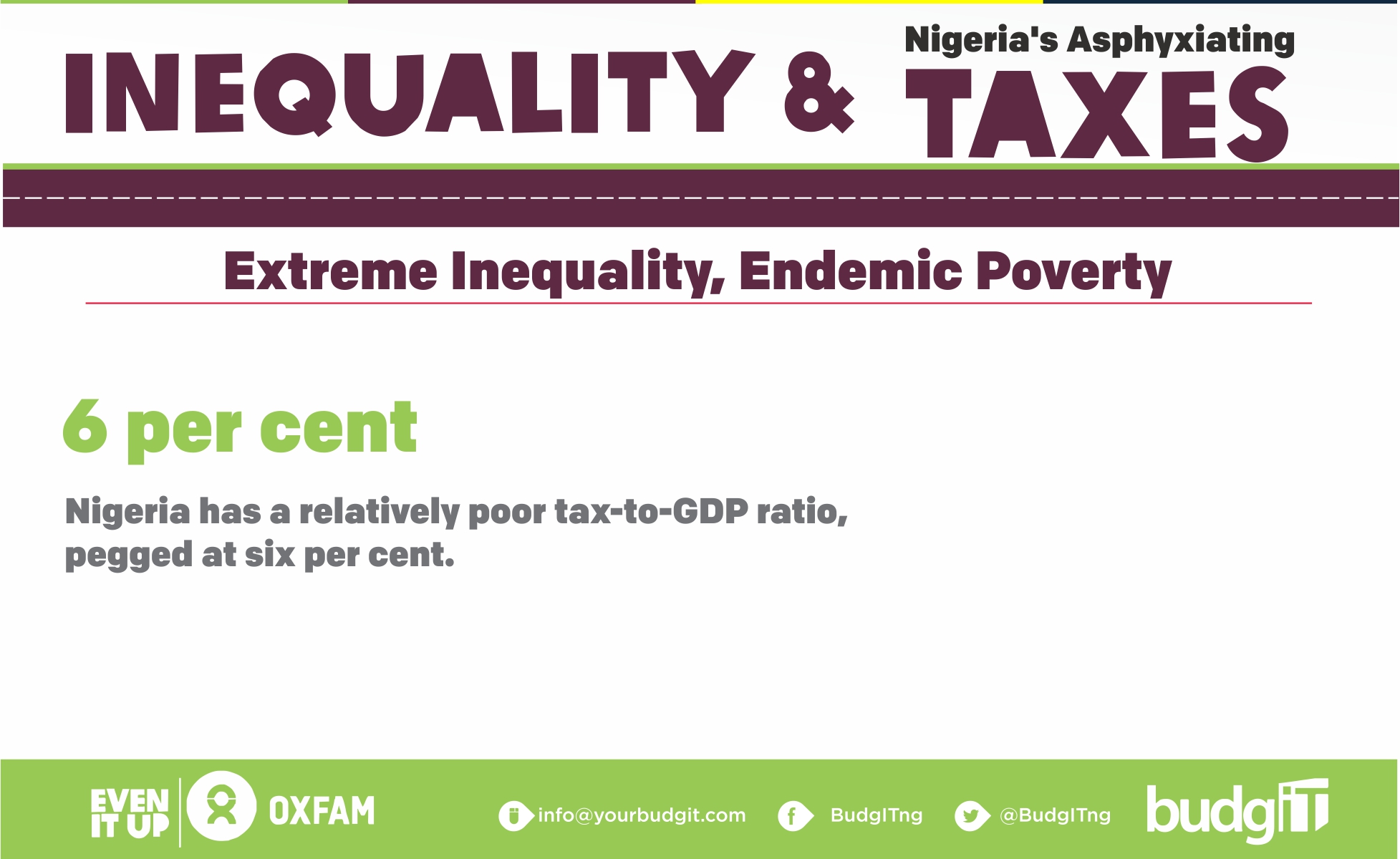 Nigeria has a relatively poor tax-to-GDP ratio, pegged at six per cent. In May 2018, Vice President Yemi Osinbajo said that with the reforms in the tax system, it might rise to 15 per cent in 2020. Tax evasion is particularly rampant among Nigeria’s wealthiest citizens as only 214 people in all of Nigeria pay more than 20 million naira ($55,600) in tax, according to former finance minister Kemi Adeosun. In recent time, it is becoming increasingly clear that while big businessmen and multinationals cleverly evade taxes, small businesses and poor individuals are often the target of government’s revenue drive.

Tax holiday for the rich, more taxes for the Poor

In 2016, Nigeria slipped into recession chiefly as a result of a crash in oil prices in the international market. Since the nation slipped out of recession in the second quarter of 2017, the economy is said to have improved but many Nigerians still struggle in their businesses. According to the last unemployment report by the National Bureau of Statistics, Nigeria’s unemployment rate is now at 23 percent, after growing for 15 consecutive quarters. The inflation rate is about 11 per cent while 94 million people are said to be living on less than $1.90 per day.

Yet, amidst the economic uncertainty, Nigerians would have to brace up to pay more taxes in the months ahead.

First, the value added tax is expected to be jerked up from five per cent to 7.5 per cent, while a communication services tax that will lead to additional charges on calls, SMS, data and cable TV services is being proposed. There are strong indications already that tollgates would soon return to expressways in the country. Earlier, on May 11, 2016, barely a year after being sworn into office, the Buhari administration had increased the pump price of petrol from N86.50 to N 145. There had also been an increase in electricity tariff. 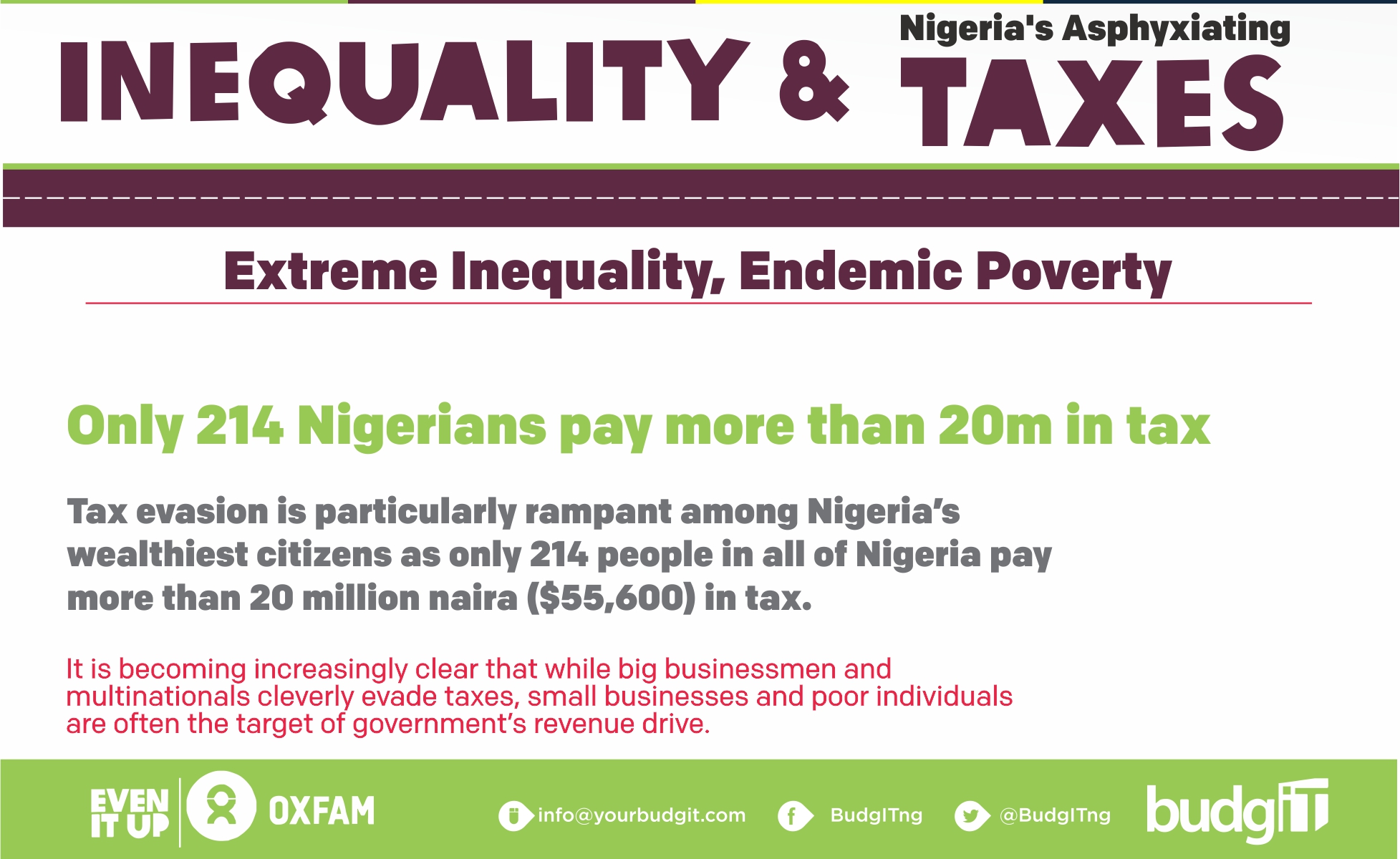 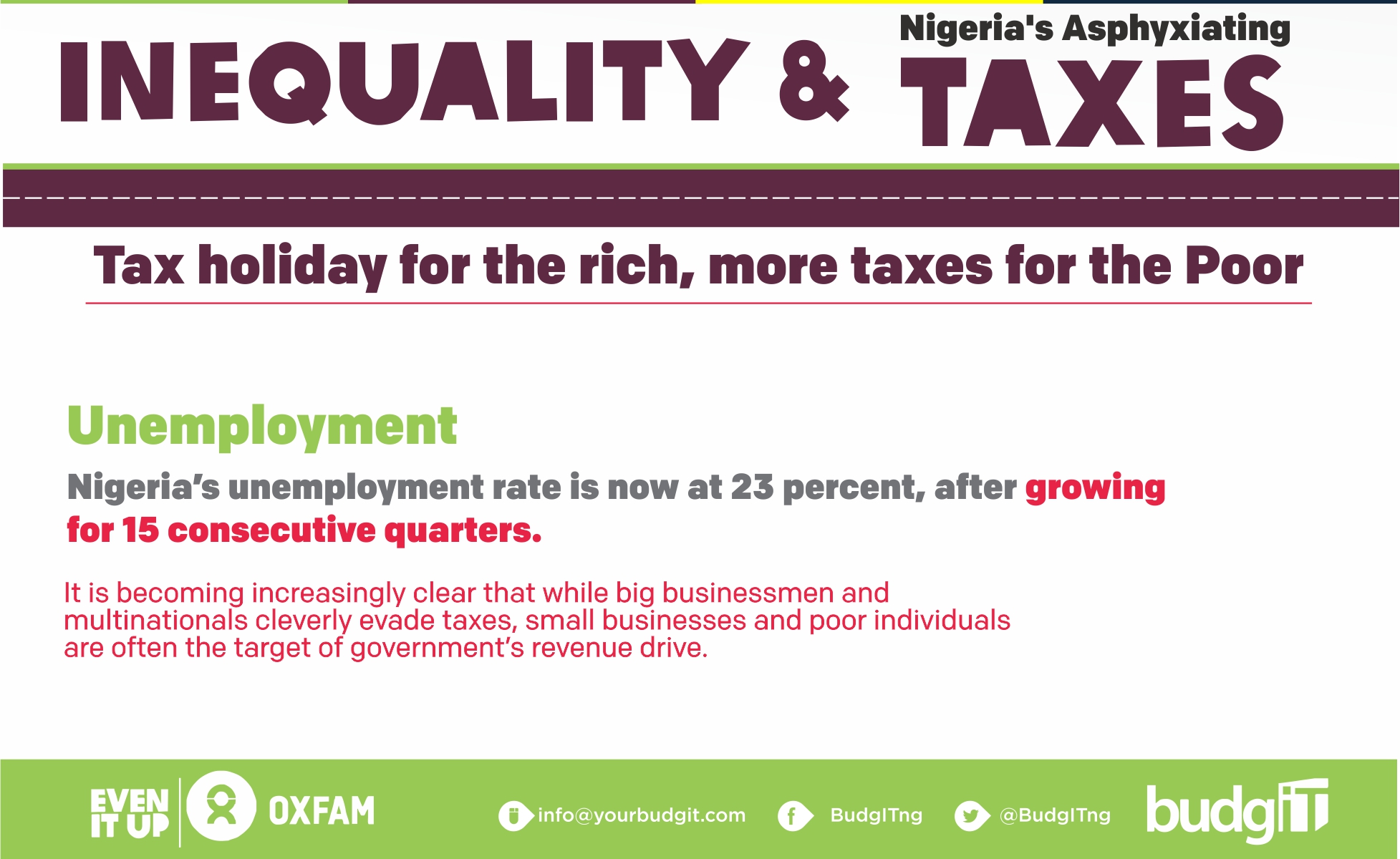 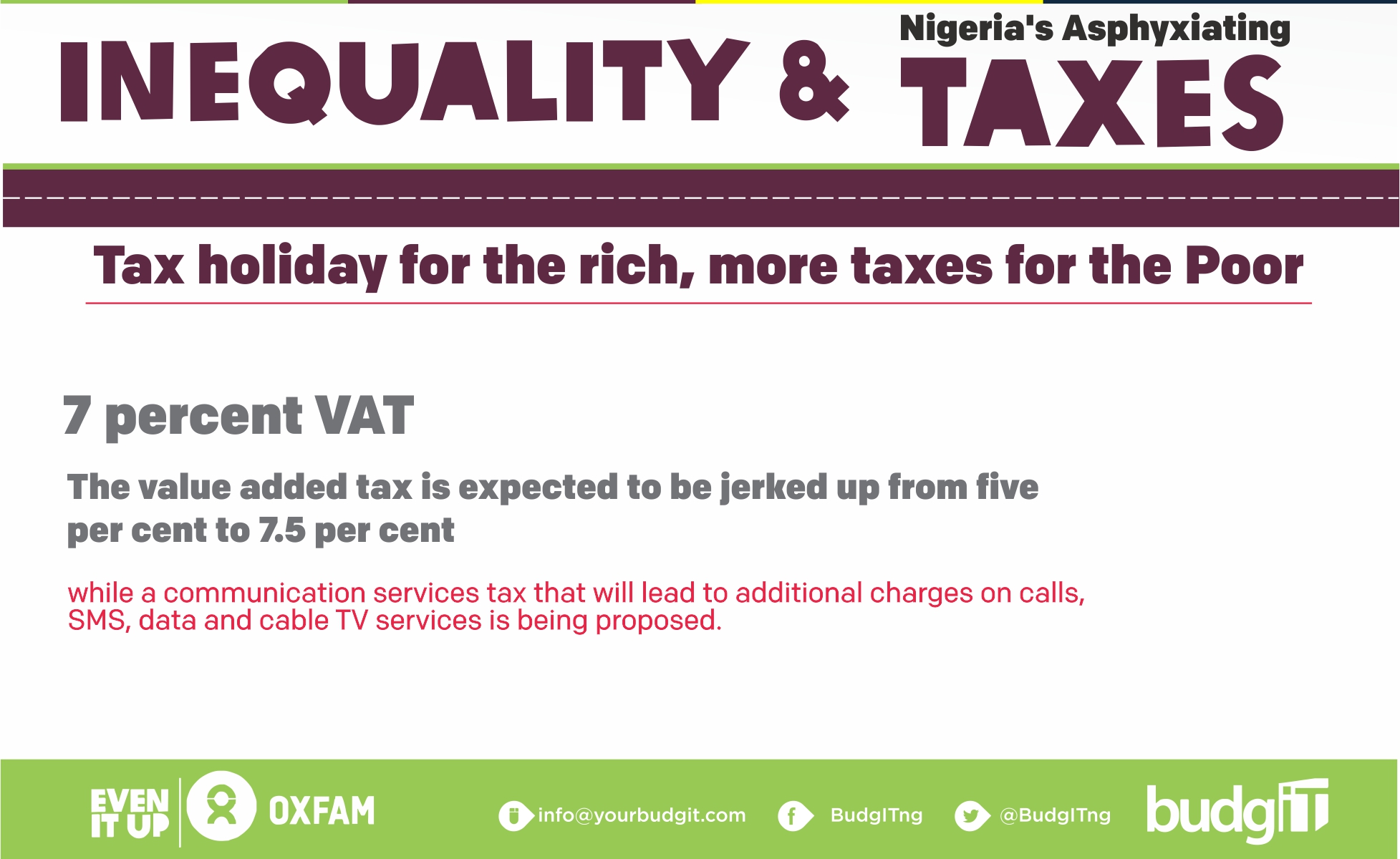 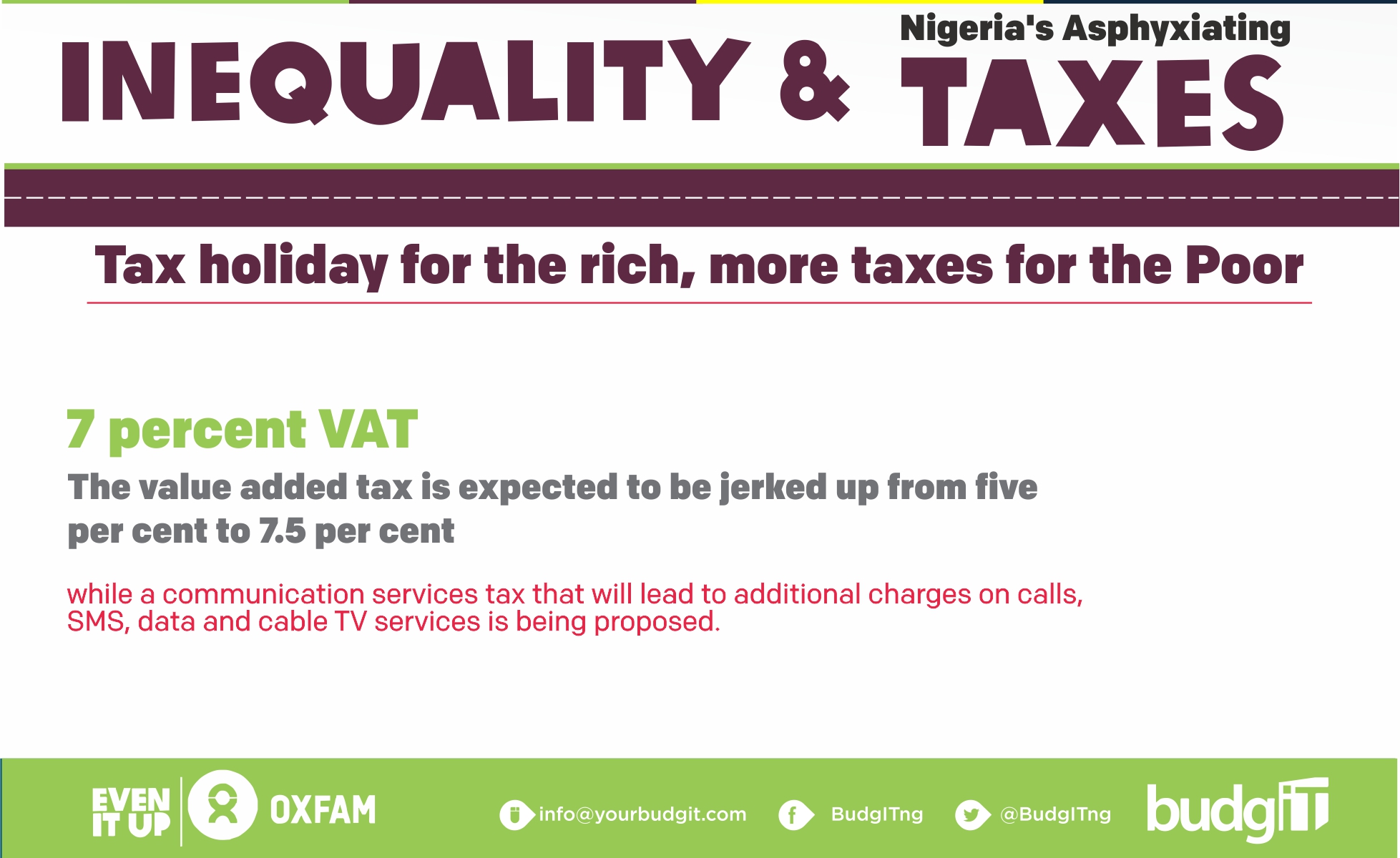 In September, the Central Bank of Nigeria (CBN) imposed charges on cash deposits and withdrawals above N500,000 for individual accounts and N3 million for corporate accounts. The CBN said individuals will have to pay a three percent charge as processing fees on all withdrawals and two percent for cash lodgments in excess of N500,000.

But while the poor can barely escape the aforementioned taxes, the rich and other multinationals are having a field day through tax evasion and avoidance—-and that’s only when they are not enjoying tax holiday. For instance, details emerged in 2017 that the Nigerian government had reviewed the five-year limit on tax order enjoyed by Dangote Group to a 10-year period to sustain private investment in road infrastructure. Although the company later debunked the report, the decision was trailed by scathing criticism among Nigerians. 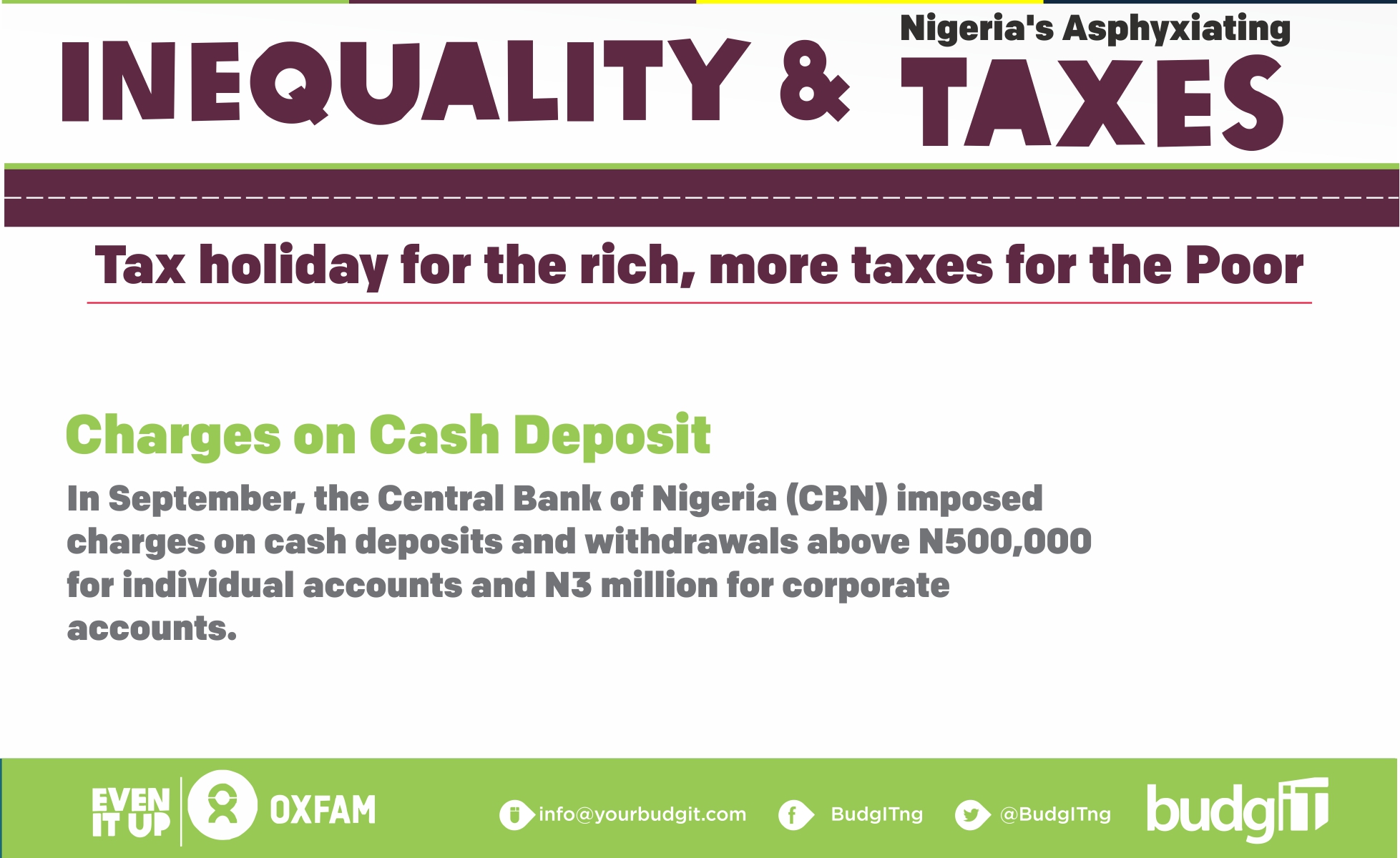 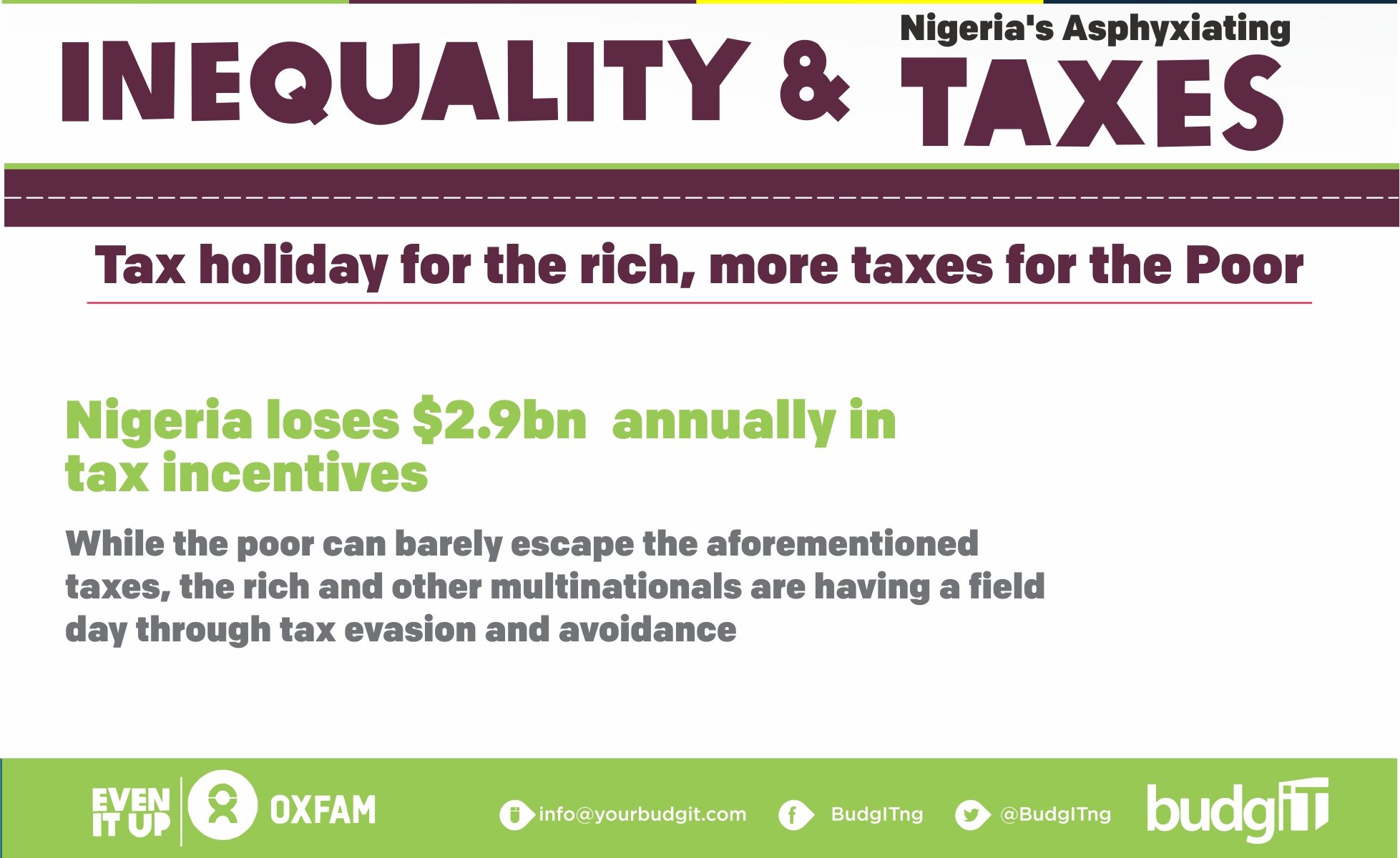 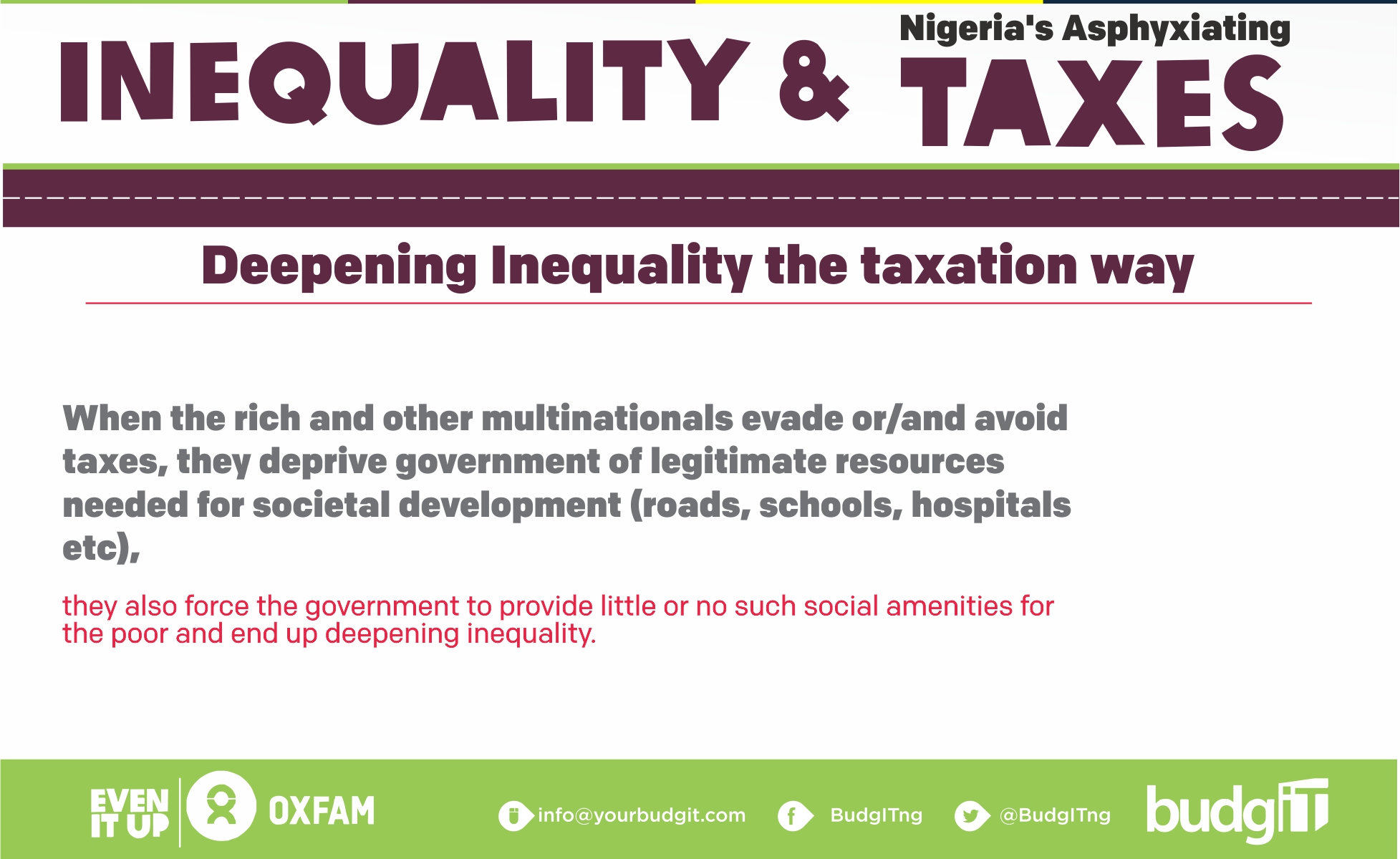 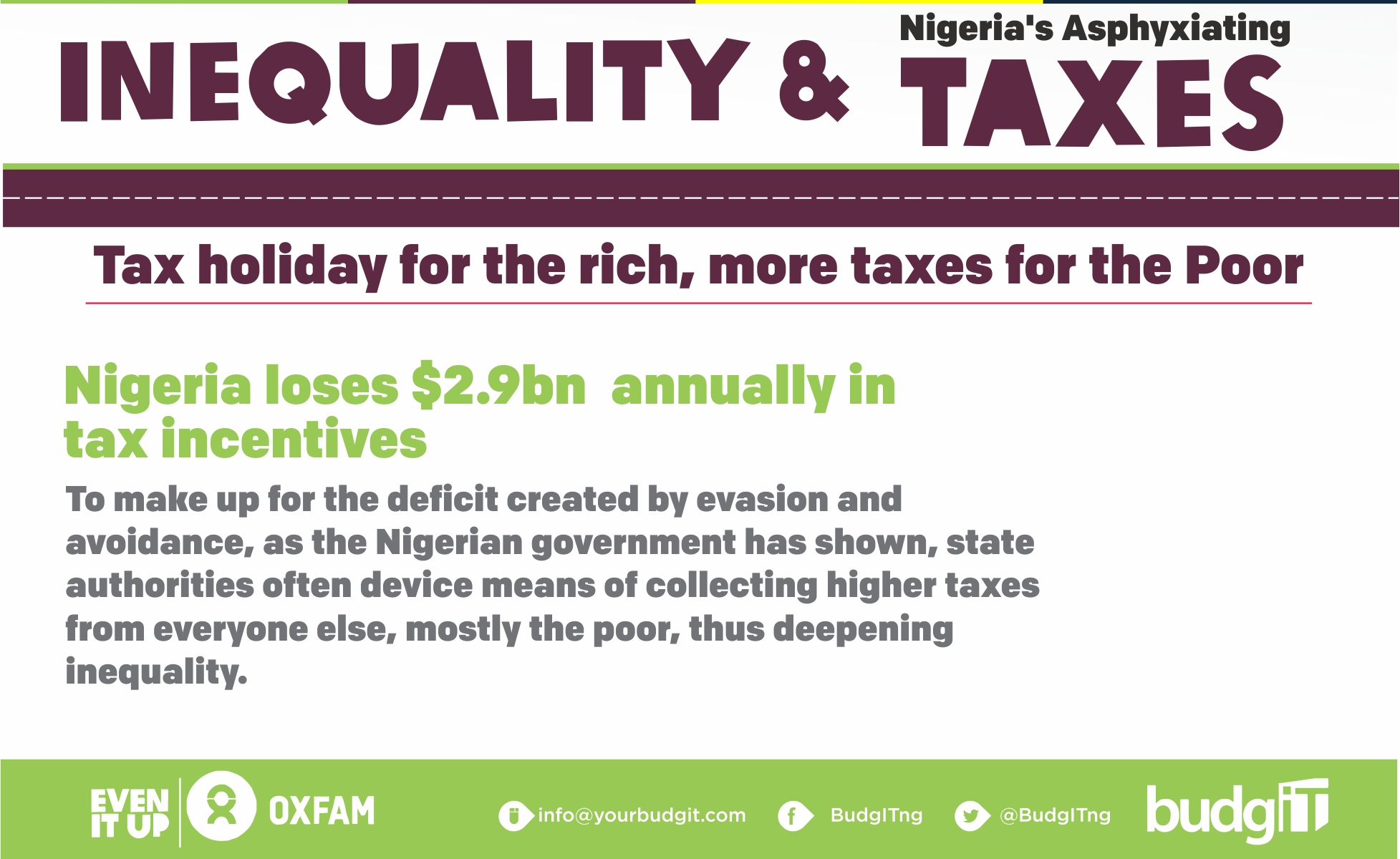 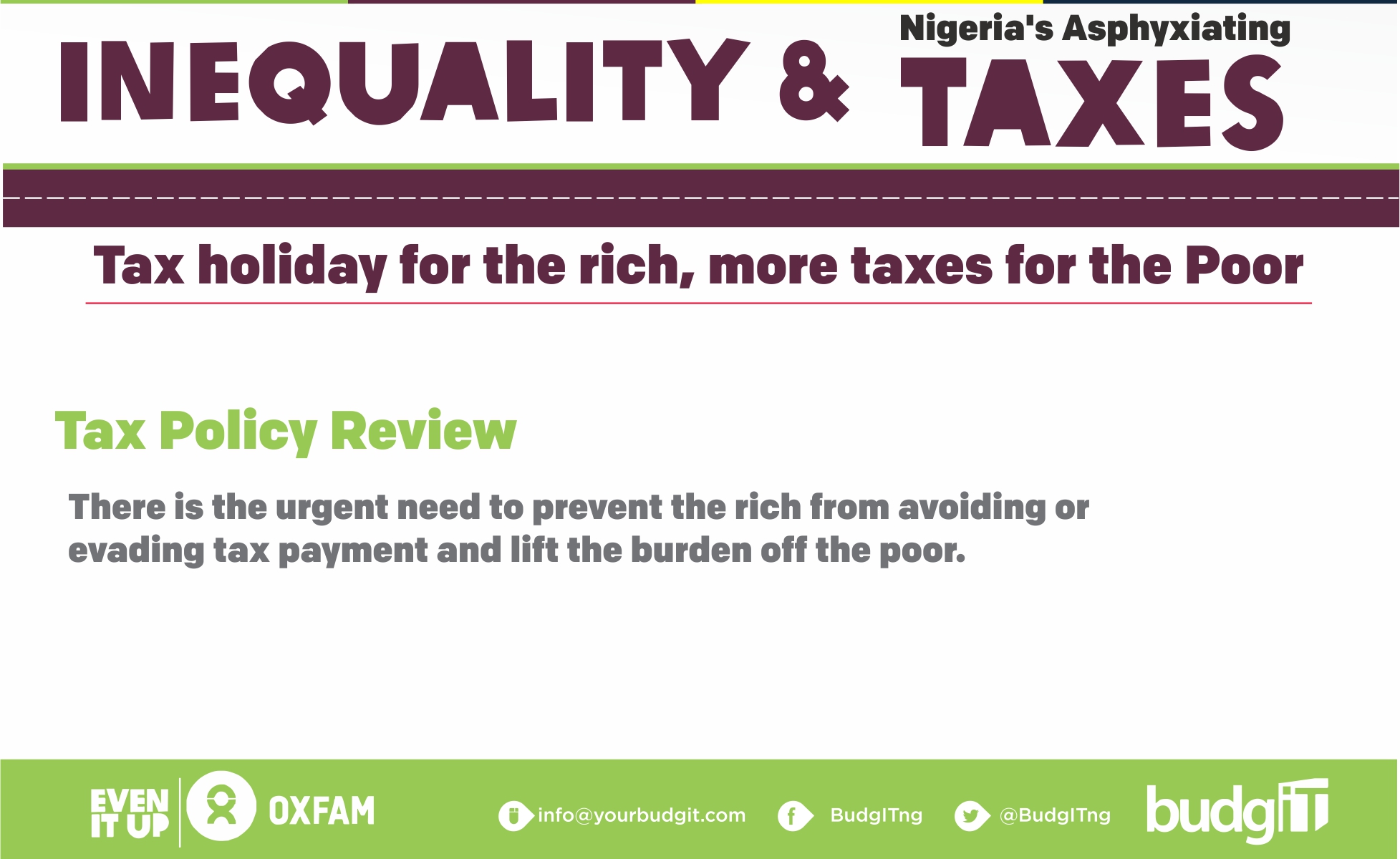 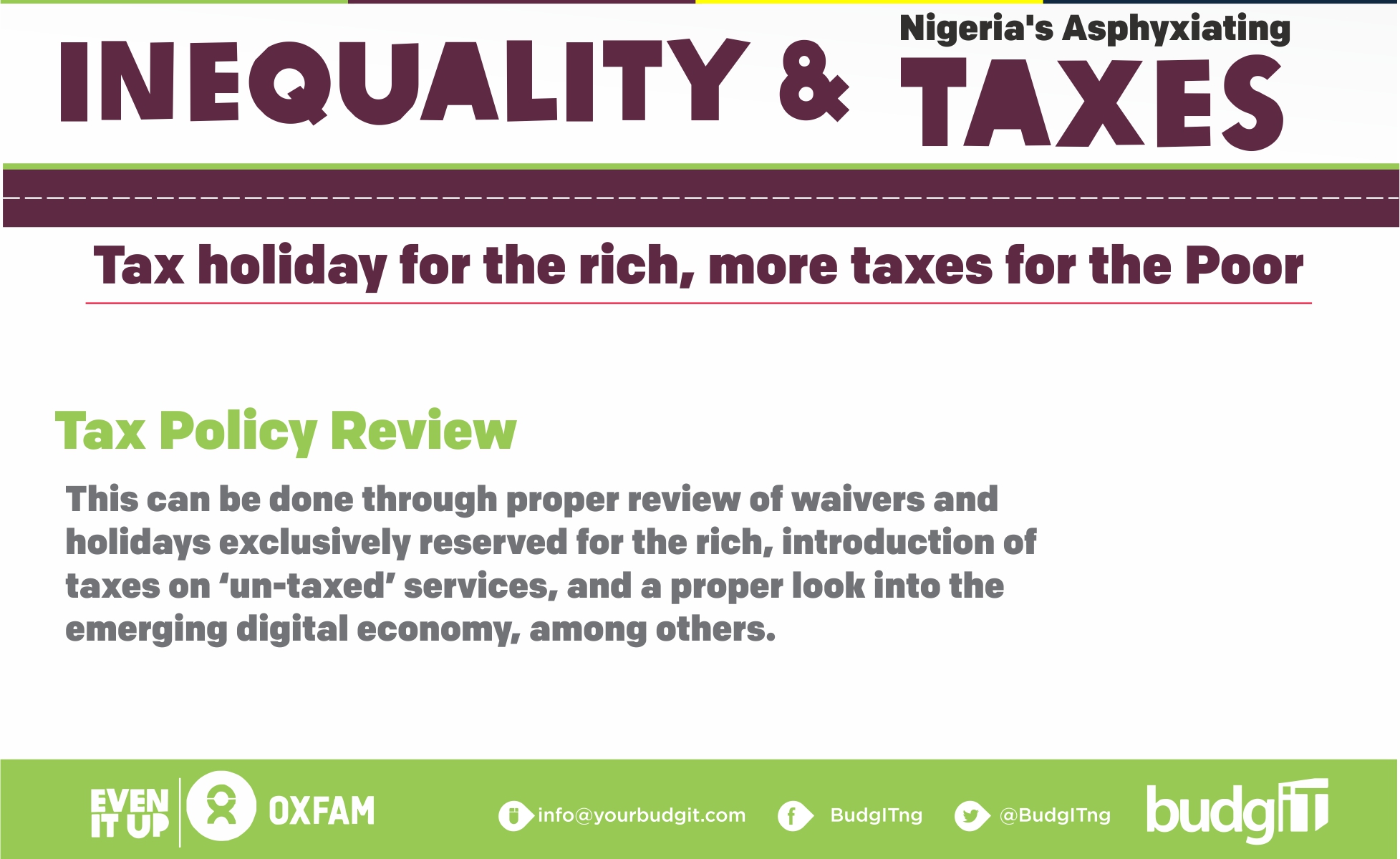 Mr Yekinni says he has two other businesses he manages when he is not at work. But due to poor sales and multiple taxation, he has closed shop.

When the rich and other multinationals evade or/and avoid taxes, they do not only deprive government of legitimate resources needed for societal development (roads, schools, hospitals etc), they also force the government to provide little or no such social amenities for the poor and end up deepening inequality. Of course, unlike the poor, they have alternative means of accessing these amenities either within or without their respective countries.

In effect, to make up for the deficit created by evasion and avoidance, as the Nigerian government has shown, state authorities often device means of collecting higher taxes from everyone else, mostly the poor, thus deepening inequality. To then bridge the inequality gap and allow poor Nigerians like Mr Yekinni live a fairly decent life, there is the urgent need to prevent the rich from avoiding or evading tax payment and lift the burden off the poor. This can be done through proper review of waivers and holidays exclusively reserved for the rich, introduction of taxes on ‘un-taxed’ services, and a proper look into the emerging digital economy, among others.

By 2030, a quarter of very poor people will be Nigerian, according to a prediction of the World Data Lab.  Should that be the fate of Mr Yekinni and millions of other Nigerians?