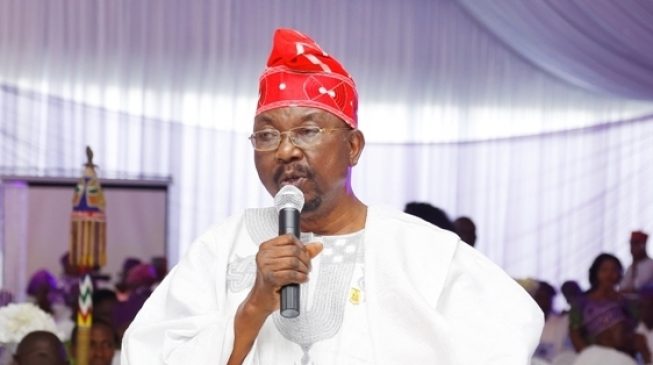 19:58 2018
Print This Article Share it With Friends
👤by Malik Abdulganiy  0 Comments
Advertisement

Olabiyi Durojaiye, the chairman of the board of the Nigerian Communications Commission (NCC), is working very hard to shift the goalposts and force the sale of 9mobile to Smile Telecoms Holdings, TheCable can report.

The troubled mobile operator had been sold to Teleology Holdings Ltd whose bid was preferred to that of Smile Telecoms.

Teleology, promoted by Adrian Wood, former CEO of MTN Nigeria, has made a non-refundable deposit of $50 million to acquire the brand formerly known as Etisalat.

According to documents seen by TheCable, United Capital Trustees acknowledged receipt of Teleology’s payment on March 21, 2018.

However, Durojaiye, who was a senator in 1999, has written a letter to the Central Bank of Nigeria (CBN) listing new criteria of “technical expertise” and “at least three years operational history” — and vowing that NCC would not issue an operational licence to Teleology.

His letter, insiders told TheCable, was designed to favour Smile, the company believed to be secretly backed by a former director of the Etisalat board that went bankrupt.

Although he does not have executive powers and had never written on behalf of NCC since the transaction started in 2017, Durojaiye curiously wrote to the CBN on March 14 to raise an objection after the processes had been concluded.

Teleology is the only company on the final shortlist that is a special purpose vehicle (SPV).

Its brand and technical partner is Saraficom, a Kenyan telecoms company established in 1997 which currently has over 30 million subscribers and 1000 4G cell stations in the eastern African country.

However, Airtel pulled out of the final leg in the bid process, while Globacom and Helios did not name any price.

In bid documents seen by TheCable, both Teleology and Smile offered to pay the symbolic $1 for 99.9% issued share capital of 9mobile.

Teleology promised an initial capital injection of $531 million broken down thus: $301 million first payment to banks, who are owed $1.2 billion by Etisalat; $100 million payment to leading vendors — Nokia, Hauwei and IHS; and a working capital of $130 million.

It also promised a capital investment of $270 million in the first year to improve network quality.

Smile, on the other hand, promised a much lower payment of $250 million to banks in the form of bonds redeemable in 10 years — an arrangement said not to have gone down well with the creditors who would rather invest their money in other instruments for higher yields.

The company also promised to pay $130 million “full and final payment” to all other creditors, which is also said to have been considered unfavourable by the vendors.

Its promised working capital of $120 million is $10 million lower than Teleology’s offer.

Insiders told TheCable that Durojaiye’s position could result in a flurry of legal actions and turn 9mobile to another NITEL, the government-owned telecoms company that could not be privatised for over 10 years because of political intrigues.

Both the CBN and the NCC were involved in the entire process of the 9mobile sale from day one — starting from June 2017 when the creditors took over the telco.

The apex bank and the telecoms regulator jointly appointed Joseph Nnanna as the chairman of the board.

Emefiele also made a presentation to the NCC board, with Durojaiye in attendance, and the board did not raise any issue on the participation of SPVs, TheCable understands.

Danbatta nominated two NCC representatives to the final presentation of bids which was held on December 4, 2017.

Next day, after the analyses of the presentations, five bidders were chosen for the next stage during a meeting of the board  — which was to take a deeper look into the financial affairs of 9mobile and a final binding financial and technical bids for the company by January 16, 2018.

TheCable also learnt that the CBN sent a comprehensive report of that meeting to the NCC, which also had representatives on the day these bids were opened.

“During all of these interactions, neither these representatives nor the topmost management of the NCC mentioned that the licence would only be transferred to an existing telco,” an insider said.

“Durojaiye is now trying to shift the goalposts in the dying minutes of a match. The whole world is laughing at us,” an official of NCC told TheCable, suggesting that the board chairman is on his own.

“There would be significant, uncertain, expensive and cross-cutting legal ramifications if the board of the NCC were to insist on this new rule so late in the process.”

A clear indication that Durojaiye does not enjoy the support of the regulators was a letter written to the board of 9mobile by Emefiele and Danbatta.

After complaining about the media war being waged by some of the parties involved, they wrote: “For the avoidance of doubt, the CBN and the NCC would like to restate our resolve to continue the cooperation that has guided the process and reiterate our utmost faith and confidence in the outcomes so far.”

The letter was dated March 22, 2018 — six days after Durojaiye had written his own letter apparently trying to nullify the sale to Teleology.