INTERVIEW: Nothing scares me on the football pitch, I’m like a pit bull, says Omidiji Jnr 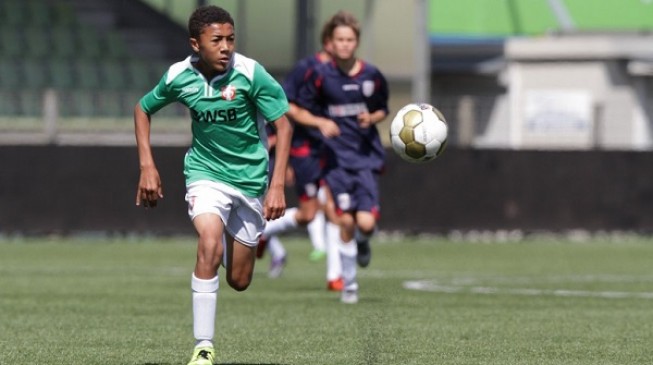 20:35 2017
Print This Article Share it With Friends
👤by Remi Sulola  1 Comment
Advertisement

Most of the greatest Nigerian footballers in history had their roots at the youth level – from where they rise and develop into greatness.

Lateef Omidiji Jnr, a 13-year-old Nigerian based in Las Vegas, US, hopes to tow that oft-travelled path of legendary footballers.

The only difference between the Nigerian starlet and youth stars of old is that he’s already quite known at 13. A quick Google search will unearth his impressive exploits in the US and Holland – which has resulted in several top European clubs seeking to sign him

In this interview with TheCable, Omidiji, who is eligible to play for Nigeria, US and Holland, speaks about his career, education and his football ambition.

How does it feel to be in the international glare at your age?

Being in the international glare at 13 going to be 14 years in September has zero impact on my work ethic. I have played against some of the top academies in Europe over the past two years and prior to that when I was based in the United States, I played in tournaments all across the country and played summer tournaments in Europe so it is not new to me. I’ve been playing in front of scouts from Europe’s elite clubs for the past two years- from Real Madrid to Chelsea to AC Milan. It certainly feels great to hear compliments from them but the only thing that it does to me is to work harder. I have a lot of good people around me and a lot of mentors so I am focused.

Does your football career affect your education?

No way. I’m a straight A student. Actually, I have a presidential award from President Obama for getting good grades at school. I hang that proudly on my wall and I am a competitive person period – school, football, even playing snakes and ladder or PS4 with my friends or family. School is number one priority, everything else comes after. I want to be a professional football player in a couple of years but my father has always said that you can’t be a dummy off the field and be smart on it. As a matter of fact, I have never scored B in any class since I started school. I hold myself to a high standard in everything I do and playing for Feyenoord, I get the best of both worlds. I will be attending one of the best schools in Rotterdam while at the academy.

Which country will you choose between US or Nigeria for your international career?

The Nigerian Football Federation (NFF) president Amaju Pinnick and vice chairman Barrister Seyi Akinwunmi have gone above and beyond. Barrister Akinwunmi is in charge of youth football in Nigeria and he is a visionary who loves youth football, look at what he is doing with Eko football and the different youth football tournaments from Channels to Coca-Cola. They are looking at 2019 with plans to make sure Nigeria not only qualifies but excels at the World Cup. I won’t deny that I play with US youth national team and they have gone above and beyond as well. I hear from coaches within the organisation regularly checking up on me seeing how I’m doing and letting me know of future plans and with the NFF publicly letting the world know that they hear what’s being said in Europe about me and see that I can really play football and I’m part of their future plans. That goes a long way and makes the decision a hard one but we are 2 years away from the U17 world cup and Netherlands is also an option. But I’ll focus on developing and we’ll see.

The love I get from the Nigerian public is immense but I also get a lot of love from the American and Dutch public so now is not the time for choosing, it’s time for me keep working hard and see the plans from each federation and how I fit into those plans and go from there but I have to repeat that Barrister Akinwunmi has been immense. He is the reason playing for Nigeria is an option because of his approach and vision. I would have been in Lagos this week for the Lagos state celebration of Eko Football but it’s finals week, couldn’t make it but I will definitely be at the football house sometime this year. 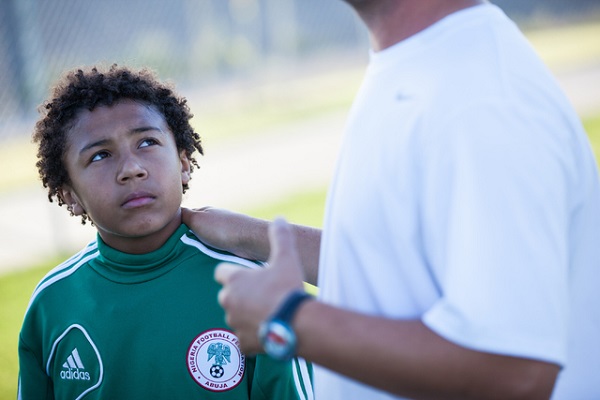 How did your career begin and what influenced your decision to start playing football?

I’ve been playing since I was 5, started at Rainbow Youth Soccer League in Las Vegas and have always played a year or 2 years ahead of my age because of my speed so that I can develop technically and not always rely on my speed. My influence is, of course, my older sister Sophia- she is the best football player I know male or female – I learn a lot from her. Las Vegas also has a large Nigerian community who are all football fans and the encouragement I got from them and still get from them always motivated me but I just love being out there competing, using my skills to help my team win.

How did you join FC Feyenoord?

Anyone that follows European football knows that Feyenoord is a Dutch institution so getting an opportunity to play for them is a blessing but they scouted me along with Ajax and PSV and the other top clubs in the Netherlands but I chose Feyenoord because I felt I could learn here. They know my strengths and weaknesses and told me that they can make me a world class player and from the first training there, I got better because the training here is top notch and the way they have their academy structured, you are being prepared for the first team. I was previously playing at FC Dordrecht whom I’m grateful to because I had a chance to learn the Dutch style of play, learned the language in three months and learned how to play four different positions. When I arrived at Dordrecht, I was only playing as number 9, when I left Dordrecht, I can play right wing, left wing, number 10 and my traditional role of number 9.

Your mates are older than you and bigger in size, does this intimidate you?

Size means nothing in football. If it did, Messi wouldn’t be the best player in football and Maradona wouldn’t be one of the best player ever and Jorge Campo of Mexico wouldn’t be one of the best goalkeepers ever. Eden Hazard wouldn’t be one of the best players in the world and the list goes on. Football is all about technique, tactic and that’s what the Dutch are all about. Nothing intimidates you on the football pitch if you have good technique. The old thinking that a big player is a small player has been exposed to be false over the past couple of years. I have always played two years up in age because my speed has always been too much for kids my age so playing up allowed me to develop my technique, develop strength and besides, I have Lagos blood running through me- nothing intimidates me. I love contact, I turn into half Diego Costa half Pepe when I’m on the pitch – a bit like a pit bull – never scared. I’m used to being the youngest on my teams but I’m also usually the most talented technically wise.

Which Nigerian football icons would you love to be like?

With the current players, of course, Kelechi Iheanacho, he’s an inspiration to me – I think the best young player in the world – the statistics don’t lie. Victor Moses, Ahmed Musa are incredible and Alex Iwobi, of course, is an amazing player and I only mention attackers because I’m an attacker. At the end of the day, I want to be me because that’s all I can be but I look up to and admire them but know I have a long way and a lot of work to do to get there. These group of players I believe can win the World Cup and any country should be scared to get on the pitch with them. 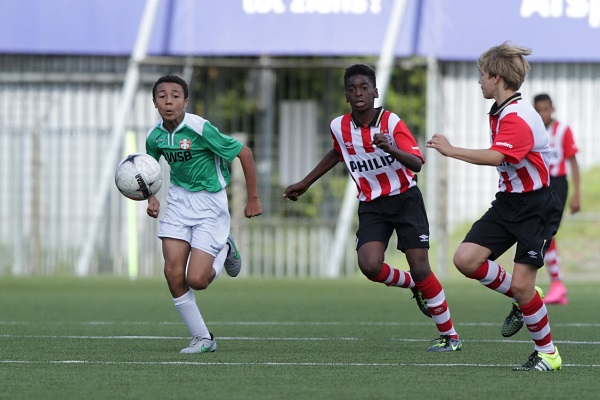 Do you monitor some of the present Nigerian national team players?

Yes, I know some of them, I had an opportunity to meet a few of them in Luxembourg and they are all down to earth. I talk to Troost because I’m in Holland and he’s from there. He’s very humble, highly inspirational and he is a beast. I met Kelechi, he’s humble and one of the most down to earth players on that team is Ogenyi Onazi. If I was a senior player, he’s one that I’d want to be on the same team with because he lifts the spirits. I’ve also met Kenneth Omeruo. I talk to some of them, and some would just randomly send me messages – how are you doing little brother, keep your focus. I would love to meet more current and ex-players because mentors are important in sport. People who have been through the path you’re about to go through.

When did you realise you have extraordinary talent in football?

The only thing extraordinary is God. I’m just a youth who loves football, works hard every day to be better and by the special grace of God blessed that people whose job it is to judge talent see my potential and say that with continued development, I can be a special player. I’m far from where I want to be. When I lift a U17, U20 and senior world cup and win the Balon D’Or a couple of times, then I can start to think okay, I’m getting there but my goal is far from being met and only God is extraordinary. When I win my first World Cup, then I will come to Lagos, go to Brilla FM and sing I’ma big deal by Chris Martin live on air. Until then, it is work till I get there.

How much influence was Danladi Nasidi to you?

He came to Las Vegas when I as 10 and watched me play and immediately said that when the U13/U15 national team resumes I have a spot there. This was way before I was called up to the US national team. I’m grateful to him because he saw the potential. He’s a smart coach with years of experience in our national team. He is very supportive and encouraging.

How do your parents feel about your football career?

I’m blessed to have supportive parents. They keep you grounded and are the ones there when you have bad days. The unconditional love they give me and my siblings – we’re lucky. The life lessons we get from them – we are truly blessed.

TWITTER @thecableng
Copyright 2020 TheCable. All rights reserved. This material, and other digital content on this website, may not be reproduced, published, broadcast, rewritten or redistributed in whole or in part without prior express written permission from TheCable.
Tags
Amaju PinnickFeyenoordLateef Omidiji JrNigeria Football Federation (NFF)Real MadridSeyi Akinwunmisport
Advertisement

Mbaka: Uzodinma’s is just one… 39 of my prophecies for 2020 will come pass

Siasia: I’ve raised only $275 on GoFundMe to appeal FIFA ban