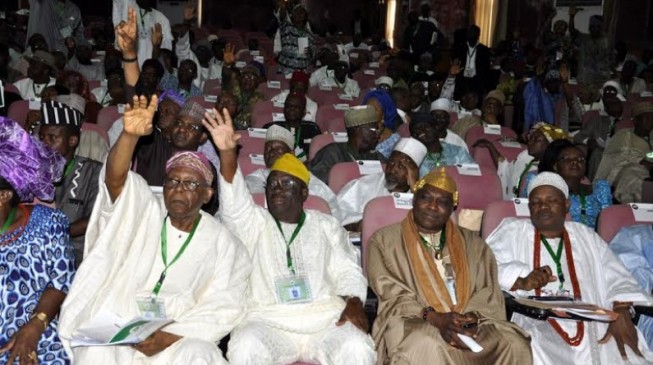 23:12 2020
Print This Article Share it With Friends
👤by Ebunoluwa Olafusi  0 Comments
Advertisement

Some Nigerians living abroad have called on the authorities to follow up on the recent call for national dialogue by the Arewa Consultative Forum (ACF).

In a statement, Dele Ogun, chairman of the group known as Fatherland, said the time had come for Nigerians to come together for “constructive national dialogue” to deal with the growing ethnic suspicion and other socio-political problems afflicting the country.

Ogun said his group is in support of the call by Usman Bugaje, a chieftain of ACF, for a national dialogue on the future of the country.

During a lecture titled “Nigeria In Turbulent Times: Pathways to Peaceful Co-Existence and National Cohesion” Bugaje had called for the mobilisation of a national consensus.

“We share Dr Bugaje’s view on the urgent need for us to find a way forward out of the present morass for the benefit of all of our peoples and so we are pleased to accept his call,” Ogun said.

“However, there are some errors and misconceptions in the lecture that he delivered which need to be corrected.

Ogun said while Bugaje cited Somalia as an example of a failed state despite being a country of the same language, faith and culture, he must also be aware of the peace and prosperity that multi-ethnic Switzerland has enjoyed despite its different nationalities.

He said Bugaje was wrong in his submission that Nigeria has allowed the ignorant to lead the national discourse on ethnicity.

Ogun added that using his own ethnic platform to deliver the call for Nigerians to free themselves from the shackles of ethnicity also undermines the message.

“In an effort to support his claim that those who have faced up to the realities have been scoring ‘cheap points’ he points to England and says ‘Today the Turkish roots of the current British Prime Minister are very well known and acknowledged, but it did not make him any less British’,” he said.

“He fails to realise that the four remaining fingers of his hand are pointing home to Abuja where no Southerner has been allowed to occupy the office of Minister for the Federal Capital Territory even though we are all Nigerians.

“We say he should tell the Arewa Consultative Forum which he represents to back up these fine words with a commitment to a new constitutional arrangement which, with intelligent design, eschew uniformity and allow flexibility to each of the fingers of this country to allow the limbs to work independently and collectively in spite of differences.

“To unshackle that potential we, in the Fatherland Group, stand ready to join with the Arewa Consultative Forum in mobilizing for the National Consensus which he has called for.”

TWITTER @thecableng
Copyright 2020 TheCable. All rights reserved. This material, and other digital content on this website, may not be reproduced, published, broadcast, rewritten or redistributed in whole or in part without prior express written permission from TheCable.
Tags
ACFFatherlandnational dialogue
Advertisement