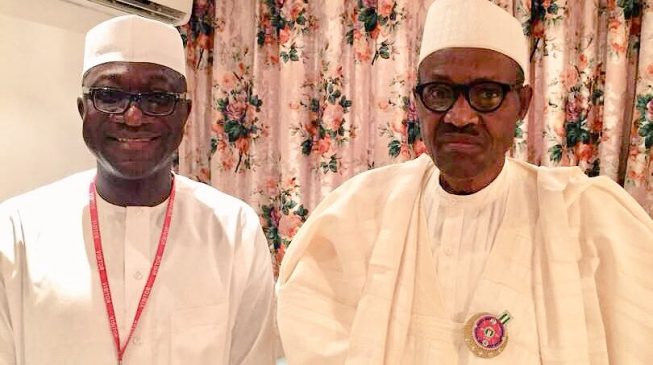 15:04 2017
Print This Article Share it With Friends
👤by TheCable  0 Comments
Advertisement

Abdulmumin Jibrin, suspended member of the house of representatives, met with President Muhammadu Buhari at the presidential villa in Abuja on Thursday.

Although he was suspended for 180 days, he has spent over 400 days without being recalled.

Speaking with state house correspondents, Jibrin said the suspension had been a learning curve.

He also said he did not visit the villa to seek the president’s intervention or discuss the crisis rocking the All Progressive Congress (APC) in Kano state.

“As you are aware I have not seen the president for a while now. Is a meeting between a son and a father,” he said.

On if he sought the president’s intervention on his political crisis in the house of representatives, he replied, “Well, I cannot comment on that. The most important thing is that I saw him and he is a very high spirit. I greeted like a son and he spoke to me like a father.”

On how felt about the campaign to get him back into the lower legislative chamber, he said: “It’s only normal. Of course, Nigerians like justice, my constituency has been suspended for 16 months, so is only normal that people will talk and ask questions, why are we not back on the aspect of court case that has been lingering for the past 16 months. I think these are some of the reasons people are raising issues in the public glare.

“For every situation like this there is always an opportunity to learn, it’s a learning curve, so, it’s fine.”

He also spoke on how Ali Ndume, a senator from Borno state, was recalled after a similar disciplinary action was taken against him.

Jibrin expressed the hope that he would get justice in court.

The lawmaker had accused the leadership of the house of representatives of padding the 2016 budget.

TWITTER @thecableng
Copyright 2019 TheCable. All rights reserved. This material, and other digital content on this website, may not be reproduced, published, broadcast, rewritten or redistributed in whole or in part without prior express written permission from TheCable.
Tags
Abdulmumin JibrinAPCkano
Advertisement