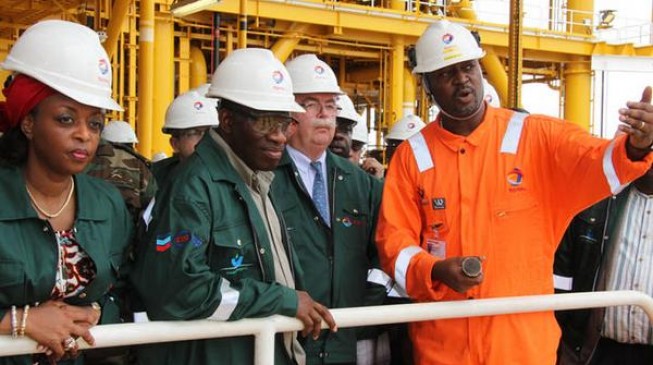 06:59 2017
Print This Article Share it With Friends
👤by News Agency  0 Comments
Advertisement

Jonathan, Alison-Madueke, and other government officials benefitted from a sum of $466m which was converted into naira, Italian prosecutors say.

According to the News Agency of Nigeria, a report by AFP claims that Jonathan and Diezani were prominent figures in the deal, which saw ENI and Shell make a $1.3 billion payment in 2011 for an offshore oil block in Nigeria.

Court documents filed December 2016 in Milan outline a case against 11 people, including senior executives from Eni and Shell as well as the companies themselves.

Claudio Descalzi, ENI chief executive and his predecessor Paolo Scaroni, were said to have met with Jonathan to thrash out the deal “in person”.

The prosecutors allege that ENI and Shell executives worked with Dan Etete, the oil minister during the military administration of Sani Abacha.

According to the court documents, Etete’s company, Malabu Oil & Gas, was the “fraudulent holder” of the OPL 245 block.

The block was illegally acquired by the oil companies in contravention of domestic laws, “without competitive tendering” and with “full, unconditional exemption from all national taxes”, prosecutors said.

$801.5 million was allegedly transferred to Etete’s Malabu accounts while $54 million was said to have been withdrawn by Abubakar Aliyu, who was described as an “agent” of Jonathan.

The prosecutors added that beneficiaries of the money went on a shopping spree buying “property, aeroplanes, armoured cars”.

Both multinational oil companies have denied any wrongdoing.

“We are aware of the investigation and we hope to show the prosecutor that there is no basis to prosecute Shell. Shell takes this matter seriously and is co-operating with the authorities,” Shell said in an email to AFP.

The Economic and Financial Crimes Commission (EFCC) was reported to have recently pressed charges in connection with the same oil block deal.

Wilson Uwujaren, EFCC spokesman, was quoted to have told AFP that charges were “filed towards the end of last year”.

Alison-Madueke was only last week compelled by a federal high court in Lagos to temporary forfeit $153 million that was allegedly stolen from state coffers.

In 2015, she was arrested by Britain’s National Crime Agency on suspicion of bribery and money laundering.

TWITTER @thecableng
Copyright 2020 TheCable. All rights reserved. This material, and other digital content on this website, may not be reproduced, published, broadcast, rewritten or redistributed in whole or in part without prior express written permission from TheCable.
Tags
diezani alison-maduekeGoodluck JonathanMalabu oil deal
Advertisement