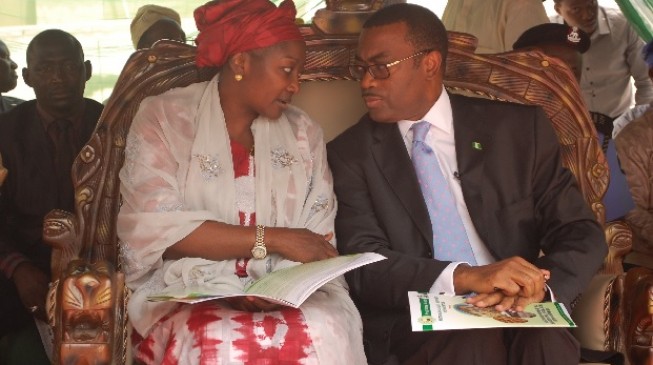 16:18 2015
Print This Article Share it With Friends
👤by Taiwo George  1 Comment
Advertisement

President Goodluck Jonathan has relieved Sharon Kasali, the executive secretary of the Petroleum Equalisation Fund (PEF), of her job, appointing Asabe Ahmed (pictured with Akinwunmi Adesina, the agric minister), the current minister of state for agriculture and rural development, to replace her.

Reuben Abati, presidential spokesman, confirmed the dismissal of Kasali, who has been in charge of PEF since 2007, but did not state any reason for the development.

Ahmed, the new PEF executive secretary, is an indigene of Niger state and an alumnus of the Ahmadu Bello University, Zaria.

The president similarly approved the appointment of Denzil Amagbe Kentebe as executive secretary of the Nigerian Content Management Development Board (NCDMB).

Kentebe, an architect with years of experience in strategic planning and policy management, takes over from Ernest Nwapa who has been executive secretary of the NCDMB since April 2010.

Jonathan has sacked a number of top government appointees since losing the March 28 presidential election.

A week after Abba was sacked, Habib Abdullahi, was relieved of his job as managing director of the Nigerian Ports Authority (NPA)

Sheni was suspended over the controversial recall of Nigeria’s high commissioner to South Africa, following attacks on foreigners in that country.

His alleged role in the controversy drew the ire of the president, as South Africa reacted negatively to the development, taunting Jonathan over the abducted Chibok schoolgirls.

TWITTER @thecableng
Copyright 2019 TheCable. All rights reserved. This material, and other digital content on this website, may not be reproduced, published, broadcast, rewritten or redistributed in whole or in part without prior express written permission from TheCable.
Tags
Asabe AhmedGoodluck Jonathanreuben abatiSharon Kasali
Advertisement