Judiciary in the dock 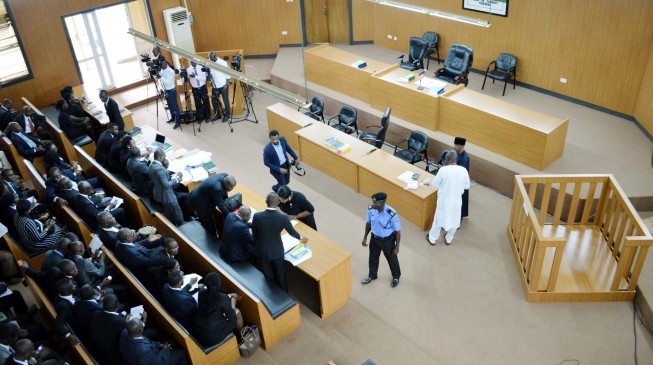 17:38 2019
Print This Article Share it With Friends
👤by Contributor  0 Comments
Advertisement

“Somewhere along the way, the balance of power between the prosecution, the defense and the judiciary shifted. We have to readjust it. The stakes are so high – the well-being of so many communities and the trajectories of so many lives, public safety depends on our collective faith in fairness and our view of the law as legitimate” – Emily Bazelon

Over the last few years, the Nigerian judiciary has been perceived as the weeping child of the three arms of government. Whether correctly or otherwise, the common truth is that the man on the street thinks something is fundamentally wrong with the judicial system in Nigeria. This perception places a huge moral burden on the
judiciary in this dispensation, and in going forward.

For the first time in the history of Nigeria, judges’ homes were invaded, many top judicial officers are facing trial, and at the height of it all, a sitting Chief Justice was made subject of a public ridicule and in the end, Justice Walter Onnoghen is recorded as the first Chief Justice of Nigeria to be forced out of office on allegations of corruption.

To put it mildly, the integrity of the judiciary in Nigeria has never been this subjected to scrutiny and odium. To compound the problem of the judiciary, the narrow-minded verdict of the Supreme Court in the now celebrated case of the Osun State Governorship Election between Adeleke v Oyetola, seem to have further widened the gulf of trust between the people and the judiciary.

Since March, the Tribunal has been fed with tons of evidence on what happened and did not happen by both parties – People’s Democratic Party (PDP) and its Presidential candidate Atiku Abubakar who is seeking the court’s confirmation of himself as the winner and (or) disqualify candidate of the All Progressives Congress (APC) President Muhammadu Buhari. Aside the APC and President Buhari, the other respondent is the Independent National Electoral Commission (INEC) whose conduct of that election has been severally lampooned.

For those who may not have followed the proceedings athe Tribunal, it is important to note that the Petitioner has argued that:

i) The 2 nd Respondent (Muhammadu Buhari), was not duly elected by majority of lawful votes cast at the February 23, 2019 Presidential Election.

iv) Muhammadu Buhari was at the time of the election not qualified to contest the said election, and

v) The 2nd Respondent (Muhammadu Buhari) submitted to INEC an affidavit containing false information of a fundamental nature in aid of his qualification for the said election.

Indeed, in the history of election petitions since Nigeria’s democracy, the amount of witnesses and documented evidence presented by the petitioner including expert witness, has not been recorded.

In a matter of hours, the five-man Appeal Court Judges would be expected to deliver their verdict based on the evidences brought by them. Their task is one which stands to make or mare the judiciary.

Political grandstanding notwithstanding, intimidations from the gladiators and their agents notwithstanding, upon the shoulders of these five judges stands the hope and future of the Nigerian judiciary.

The options before these judges are clear. They either choose to stand by truth supported by evidences presented before them or they may adopt the new albatross of the Nigerian judiciary called technicality and pass over the burden of facing the facts as they are. Whichever way they choose t go, it is a deeper battle of them and their conscience, and the future of the country.

And as stated above by journalist and legal researcher, Emily Bazelon, the judges as the Tribunal owe the legal profession, to Nigerians and humanity in general to display justice and fairness. The judiciary obviously needs a readjustment. “The well- being of so many communities and the trajectories of so many lives, public safety depends on our collective faith in fairness and our view of the law as legitimate”, Emily is not alone in this thought.

The world attention in this coming days is riveted on the Nigerian judiciary, the decision or indecision of the five-man appeal tribunal is sacrosanct.

Omoniyi is a socio-political writer based in Abuja.

TWITTER @thecableng
Copyright 2019 TheCable. All rights reserved. This material, and other digital content on this website, may not be reproduced, published, broadcast, rewritten or redistributed in whole or in part without prior express written permission from TheCable.
Tags
judiciaryJudiciary in Nigeria
Advertisement