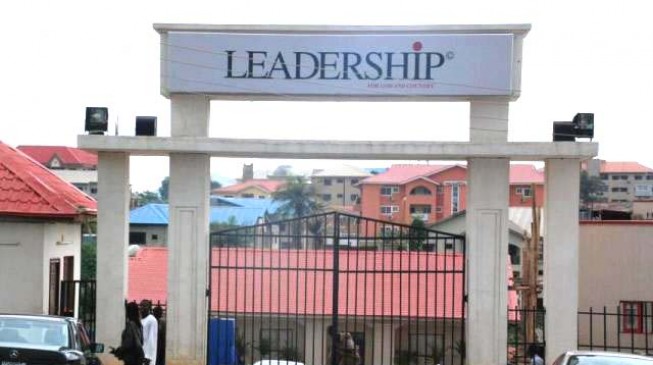 07:38 2014
Print This Article Share it With Friends
👤by Fredrick Nwabufo  0 Comments
Advertisement

Men in military uniform who said they were acting on “orders from above” have seized thousands of copies of two Abuja-based newspapers, their managements have said.

But the military authorities have said the action was as a result of an “intelligence report indicating movement of materials with grave security implications across the country using the channel of newsprint related consignments”.

The managing director of Leadership newspaper, Mr. Azubuike Ishiekwene, said copies of the newspaper were destroyed by the soldiers.

The managing director of Daily Trust, Mr Isiaq Ajibola, also told TheCable that copies of the newspaper were seized in Kano.

“Daily Trust is the main target,” he said, quoting the soldiers as saying they were looking for bombs being transported by the newspaper’s vans – an allegation he said was cooked up.

“Many newspapers were seized in Kano, but while others were soon released, ours remained confiscated,” he said.

Ishiekwene said vans transporting the Friday, June 6, edition of Leadership to some far northern states, including Katsina, Gombe, Kano and Bauchi, were intercepted by the men who seized copies, destroyed them and then confiscated the phones of the drivers.

A similar experience was also reported about the vans heading for the south-east and south-south.

In Benin City, the newspaper’s correspondent, Patrick Ochoga, said soldiers had cordoned off the secretariat of the Nigeria Union of Journalists (NUJ) on a stop-and-search operation, checking if motorists were carrying copies of the newspaper.

Defence spokesman Major-Gen. Chris Olukolade later issued a statement that read: “Troops this morning embarked on thorough search of vehicles conveying newspapers and newsprints across board.  This followed intelligence report indicating movement of materials with grave security implications across the country using the channel of newsprint related consignments.

“The Defence Headquarters wishes to clarify that the exercise has nothing to do with content or operation of the media organizations or their personnel as is being wrongly imputed by a section of the press. The military appreciates and indeed respects the role of the media as an indispensable partner in the ongoing counter-insurgency operation and the overall advancement of our country’s democratic credentials. As such, the military will not deliberately and without cause, infringe on the freedom of the press.

“The general public and the affected media organizations in particular are assured that the exercise was a routine security action and should not be misconstrued for any other motive.”

Daily Trust published a story on Wednesday alleging that top generals shared military land among themselves in choice areas of Abuja.

Leadership reported on Tuesday that 10 generals and five other senior army officers had been court-martialed and found guilty of supplying arms to Boko Haram, but the story was denied by Olukolade.

Leadership has been having a running battle with President Goodluck Jonathan, leading to the arrest and arraignment of the newspaper’s journalists over the publication of a report alleging that the president had ordered a crackdown on the opposition in the country.

The newspaper’s publisher, Mr. Sam Nda-Isaiah, this year declared his interest in running for president and has joined the leading opposition party, All Progressives Congress (APC), to pursue his ambition.

Leadership also had a brush with the government of the late President Umaru Musa Yar’Adua over a report in 2009 alleging that he was too ill to attend Jumat prayers at the National Mosque, Abuja, although the government insisted that he not only observed Jumat, he received an envoy in this office in a televised visit.

TWITTER @thecableng
Copyright 2020 TheCable. All rights reserved. This material, and other digital content on this website, may not be reproduced, published, broadcast, rewritten or redistributed in whole or in part without prior express written permission from TheCable.
Tags
Alhaji Ibrahim Hassan Dankwambocourt-martialgombe blastLeadership newspaperpresident goodluck jonathanPresident Umaru Musa Yar'Aduasoldiers
Advertisement