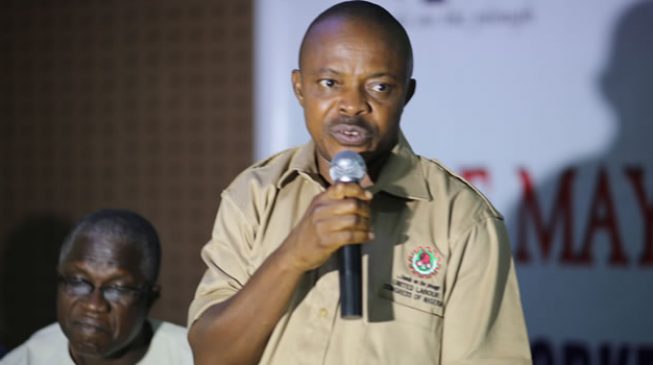 07:31 2019
Print This Article Share it With Friends
👤by TheCable  0 Comments
Advertisement

The National Union of Electricity Employees (NUEE) has suspended the strike it embarked upon on Wednesday.

The union took the action, which lasted 24 hours, after a 21-day ultimatum issued to Saleh Mamman, minister of power, to implement its demands on the privatisation of the power sector carried out by the government of ex-President Goodluck Jonathan.

In a memo dated November 7 and sent to the minister, NUEE had threatened to declare a nationwide strike if its demands were not met.

“Unpaid benefits to over 2000 disengaged staff of the defunct Power Holding Company, PHCN, since 2013; underpayment of over 50,000 ex-PHCN staff; payment of half salaries to workers by DISCOs, among other perceived unfair Labour practices,” the memo read.

“The following issues cutting across all facets of the sector are hereby highlighted for your information and necessary action. The problems created by Bureau for Public Enterprises, BPE, are BPE’s refusal to address and pay up over 2,000 disengaged Ex-PHCN staff since 2013.”

“Unfortunately, letters to your office since assumption of duty are not acknowledged.

“Consequently, we use this medium to place your esteemed office on notice that we may not continue to guarantee industrial peace, if these issues are not addressed within 21 days. This is not a threat.”

While declaring strike, the union said since Mamman failed to initiate a dialogue before the ultimatum lapsed at midnight on Tuesday, there was no other option but to down tools.

However, in a statement on Thursday, Joe Ajaero, general secretary of NUEE, said the union decided to shelve the strike after a meeting with the federal government.

He said all the concerns of the union and its members were addressed in the meeting which lasted till the early hours of Thursday.

“Following the agreement reached between NUEE and representatives of Government this morning, on all the issues in contention, the Union wishes to suspend the industrial action it embarked upon to press home these demands,” the statement read.

“Consequently, members are urged to return to their duty posts while we monitor the implementation of these agreements. We would not hesitate to resume action if the agreements are not implemented.”

The national grid collapsed during the strike which led to shutting down of the services of most of the Distribution Companies (DisCos).

In a tweet on Thursday morning, Eko Electricity Distribution Company thanked its customers for their patience while the strike lasted.

“Dear customer, National Union of Electricity Employees (NUEE) has suspended its strike. Our offices & payment channels are open for business. Thank you for your patience & understanding,” the tweet read.

Dear customer, National Union of Electricity Employees (NUEE) has suspended its strike. Our offices & payment channels are open for business. Thank you for your patience & understanding.