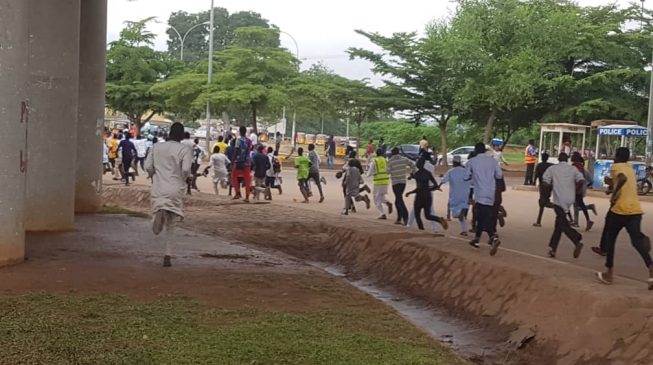 15:47 2019
Print This Article Share it With Friends
👤by Ebunoluwa Olafusi  0 Comments
Advertisement

The Islamic Movement in Nigeria (IMN) has announced a temporary suspension of its street protests.

Ibrahim Musa, president of the media forum of IMN, made this known in a statement on Wednesday.

The federal government had officially proscribed the activities of the group after a federal high court declared it a terrorist organisation.

Musa explained that the decision to suspend its protest was as a result of “some new openings into the resolution of the problems” involving the proscription of its activities.

He said the group took the decision out of respect for some eminent people and groups “whose input in the resolution appears genuine”.

He added that should a protest by members of the IMN occur anywhere in the country, it might be due to the misunderstanding of its message or some sort of mischief by security agents whom he accused of being behind attempts to smear the image of IMN.

“The Islamic Movement in Nigeria do hereby announce to the general public and the international community that it has temporarily suspended its Free Zakzaky street protests to allow for some new openings into the resolution of the problems, especially the court case instituted by our lawyers on the proscription order made by the federal government this week,” he said.

“It has taken this step in good faith out of respect for some eminent people and groups, whose input in the resolution of the problems appears genuine and we sincerely hope an amicable way could be found to solve the crises surrounding the illegal detention of our leader for almost four years now.

“If at all any protests occur anywhere in the country, it might be this notice hasn’t reach those in the field or this message is misunderstood or it is some security agents who are mischievously behind it as they have been doing in an attempt to smear our image and be seen as unruly people rather than as victims of savage oppression since 2015.

“The Islamic Movement wishes to thank both national and international civil rights activists and organizations who have been busy demanding the protection of our fundamental human rights as enshrined in the constitution.

“We also thank the press, both national and international, and the social media activists for the full coverage of our activities throughout the struggle for justice.

“We are committed to exploring the new openings we have seen in resolving this protracted issue. We therefore reiterate our demand that our leader, his wife and several others in detention be given their freedom denied to them since 2015.”

TWITTER @thecableng
Copyright 2019 TheCable. All rights reserved. This material, and other digital content on this website, may not be reproduced, published, broadcast, rewritten or redistributed in whole or in part without prior express written permission from TheCable.
Tags
FGIMNproscriptionprotests
Advertisement