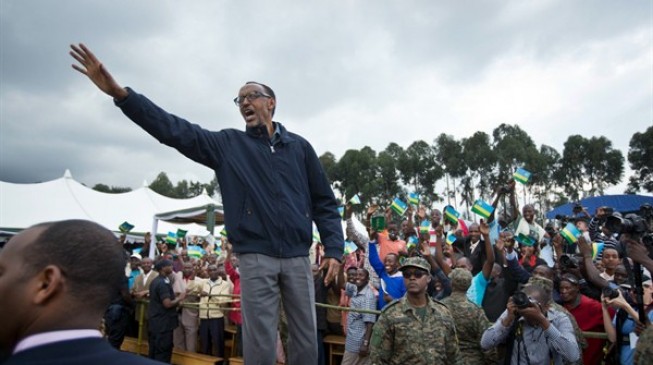 09:56 2017
Print This Article Share it With Friends
👤by News Agency  0 Comments
Advertisement

Rwandan voters queued in long lines on Friday to cast their ballots in a presidential election that incumbent president Paul Kagame is expected to win by a landslide after 17 years in power.

Kagame has won international plaudits for presiding over a peaceful and rapid economic recovery in the tiny central African nation since the 1994 genocide, when an estimated 800,000 people Tutsis and moderate Hutus were killed.

He has also faced mounting censure for what critics and rights groups say are widespread human rights abuses, a muzzling of independent media and suppression of political opposition.

Some political opponents were killed after they fled abroad, in cases that remain unsolved.

The government denies any involvement and the cases appear to have done little to blunt Kagame’s domestic standing among Rwanda’s 12 million citizens.

“Even if I am poor, I voted for Kagame for restoring peace and security,” said 45-year-old farmer Appolinaire Karangwa, who cast his ballot in the capital Kigali.

Kagame, a commander who led Tutsi rebel forces into Rwanda to end the 1994 genocide, banned the use of tribal terms after becoming president.

He won the last election in 2010 with 93 per cent of the vote and during this campaign for a further seven-year term said he expected to win nearly 100 per cent.

He told reporters shortly after voting that his campaign had been hobbled because it could not compete with the machinery of the state.

“All state structures belong to his party. It is not very easy but we are also strong,” he said.

If elected, Habineza has promised to set up a tribunal to retry dissidents whose convictions by Rwandan courts have been criticised as politically motivated.

Another would-be opponent, Diane Rwigara, was disqualified by the election board despite her insistence that she met all the requirements to run.

TWITTER @thecableng
Copyright 2020 TheCable. All rights reserved. This material, and other digital content on this website, may not be reproduced, published, broadcast, rewritten or redistributed in whole or in part without prior express written permission from TheCable.
Tags
Paul Kagamepresidential electionRwanda
Advertisement

Nkurunziza, Burundian president, to get $530,000, luxury villa as retirement benefit

Coronavirus: FG intensifies screening at ports as death toll rises to 17 in China