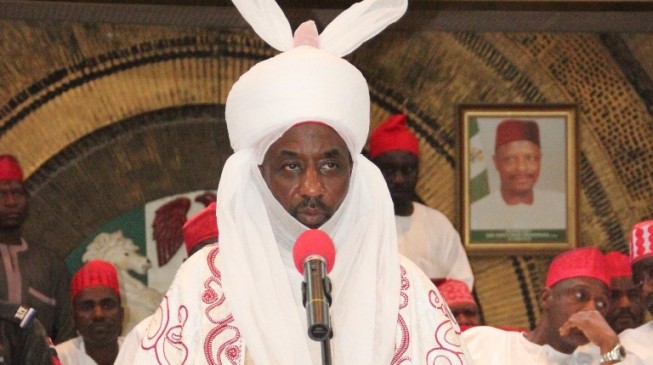 18:46 2014
Print This Article Share it With Friends
👤by Taiwo George  2 Comments
Advertisement

Muhammad Sanusi II, the emir of Kano, said Friday’s attack on the Ado Bayero central mosque in the city might have been planned for two months.

Sanusi, who was on lesser hajj when the incident occurred, ended his stay abruptly in order to personally assess the situation.

Speaking at the mosque, where he usually prays, he said the insurgents would not achieve their aim of discouraging people from worshipping in the place.

“From all indications, they (attackers) have been planning this for at least two months,” AFP quoted him as saying on Saturday.

“I have directed that the mosque be washed and cleaned and prayers should continue here. We will never be intimidated into abandoning our religion, which is the intention of the attackers.”

Survivors of the incident are undergoing treatment in various hospitals within the city and there has been a high demand for the donation of blood.

On Friday, President Goodluck Jonathan condemned the attack, appealing to residents of the state “to heed the call for donation of blood by hospitals where the injured are being treated”.

Meanwhile, Mohammed Abubakar Sa’ad III, the sultan of Sokoto and leader of Muslims in Nigeria, has called on the different Islamic sects in the country to unite in order to put an end to insurgency.

Speaking at the national mosque in Abuja on Saturday, Sa’ad condemned Friday’s attack.

“I do not believe those perpetrating these are Muslims, because if they are Muslims, they are not professing what Islam teaches,” he said.

“It has got to the time where all the sects in Islam within this country rally round one another to end insurgency in this country.”

Though the police put the death toll of the incident at 35, some reports had it that over 100 people lost their lives.

TWITTER @thecableng
Copyright 2019 TheCable. All rights reserved. This material, and other digital content on this website, may not be reproduced, published, broadcast, rewritten or redistributed in whole or in part without prior express written permission from TheCable.
Tags
Goodluck JonathanKano bombingsMohammed AbubakarMuhammad Sanusi
Advertisement