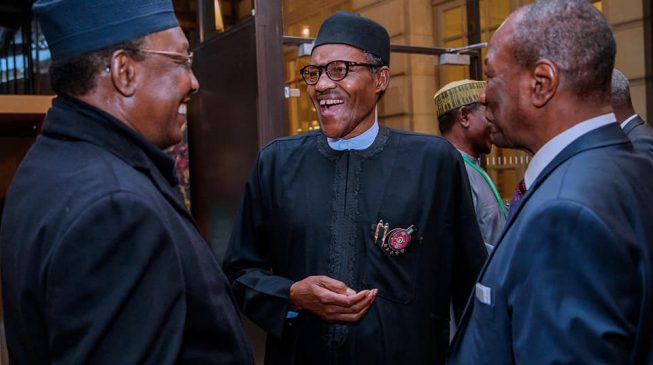 09:31 2018
Print This Article Share it With Friends
👤by Mayowa Tijani  0 Comments
Advertisement

President Muhammadu Buhari has passed a vote of confidence on Abdullahi Ganduje, the governor of Kano state, stating that the governor is very responsible.

Speaking to the Nigerian community in France earlier in the week, Buhari said Ganduje was very responsible to have continued and completed the projects started by his predecessor, Rabiu Kwankwaso.

The president said someone else could have diverted funds meant for completing the project into running for president of the Federal Republic of Nigeria.

“I compliment the governor for doing so much,” Buhari said.

“He invited me, I went to Kano, the good projects started by Kwankwaso in education and healthcare, which is [where] a lot of emphasis should be made for ordinary Nigerians, the majority, poor Nigerians, Ganduje completed them.

“If it were another person, he could have left them to show them this is the project he started, he diverted the balance to go and contest for presidency, instead of completing it.

“But he completed the project per specification, and Kano ordinary people are enjoying the benefit. I think that is very responsible of him.”

Daily Nigerian, an online newspaper, has released a series of videos showing Ganduje receiving bales of dollars, which are alleged to be kickbacks from contractors in the state.

Speaking to journalists on the matter, Ganduje, said his blood pressure is normal despite alleged blackmail by his “antagonists”.

The state house of assembly began to probe the matter, asking the newspaper to show up to prove the authenticity of the videos.

Jaafar Jaafar,  publisher of Daily Nigerian newspaper, appeared before the state house of assembly, and made a case for the authenticity of the video.

“Before DAILY NIGERIAN publishes stories, pictures or videos on its website (www.dailynigerian.com), the editors subject them to rigors of verification to establish their authenticity or otherwise,” he said.

“In the case the video clips in question, our in-house technical expert, the editor-in-chief and editorial adviser certified that the videos were original and not doctored contents.

“Experts from Amnesty International Nigeria, BBC … also watched the clips and certified their authenticity before we went to press.”

The house has, however, stopped the probe of the governor, as a result of a court order, mandating them to halt the process.

President Buhari says the video has been given to security agencies to verify.

TWITTER @thecableng
Copyright 2020 TheCable. All rights reserved. This material, and other digital content on this website, may not be reproduced, published, broadcast, rewritten or redistributed in whole or in part without prior express written permission from TheCable.
Tags
franceGandujekanoMuhammadu Buharinigeria
Advertisement