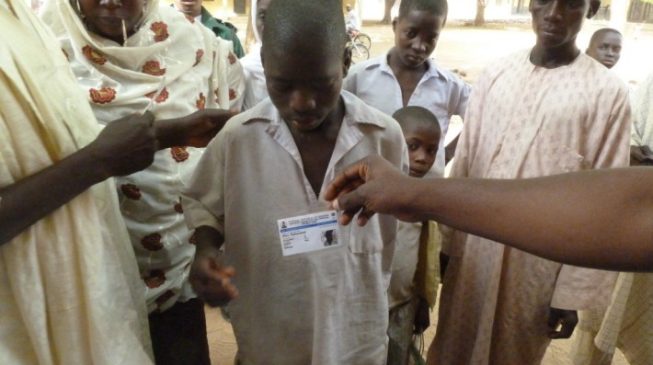 18:48 2018
Print This Article Share it With Friends
👤by TheCable  0 Comments
Advertisement

The Kano state government has once again denied the allegation that underage voters participated in the local government election which took place in the state earlier in the month.

After the poll, images of ineligible voters participating in an election went viral on social media.

The government had denied that children took part in the exercise which the All Progressives Congress (APC) won in all the local government areas of the state.

The Independent National Electoral Commission (INEC) had set up a panel to probe the allegations.

Speaking on Monday at a workshop organised by the Nigeria Union of Journalists (NUJ) in Kano, Mohammed Garba, commissioner for information, said videos and pictures released recently were captured during the 2015 election.

Garba said local and international observers adjudged the recent election as one of the freest in the history of council polls in Nigeria.

“It was recorded during the last 30 March 2015 election… some mischievous persons were behind the spreading of the clips but were missing out in the whole game because what was therein the video happened in 2015.

“We are happy that INEC has seized the gauntlet to investigate the matter… the outcome of the investigation would exonerate the Kano electoral body.”

Speaking on “Hate Speech: Halting the tide before it is too late”, theme of the programme, Garba said hate speech, particularly on social media, remains a “serious threat” to democracy and national unity.

He said there was an urgent need to tackle the menace headlong, adding that, “every sensible person today is highly concerned over the way and manner the so-called social media has almost taken over the dissemination of information. These are laymen who do this in the most unprofessional manners”.

He described the conference as apt and important to the future of journalism, expressing hope that recommendations would be implemented at the end of the programme.

Abdulwaheed Odusile, national president of NUJ, also expressed concern over the rate at which hate speech is spreading.

“As journalists, we are not trained to promote hate speeches irrespective of the source of our information,” he said.

TWITTER @thecableng
Copyright 2020 TheCable. All rights reserved. This material, and other digital content on this website, may not be reproduced, published, broadcast, rewritten or redistributed in whole or in part without prior express written permission from TheCable.
Tags
kanovoting
Advertisement

ALERT: Lagos to shut roads in Ikeja, Iganmu for 48 hours