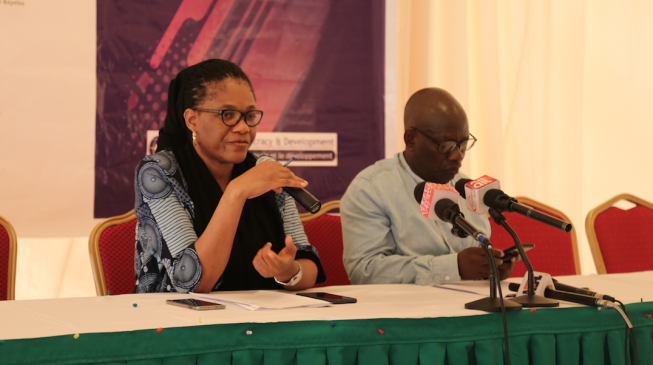 17:08 2019
Print This Article Share it With Friends
👤by Taiwo Adebulu  0 Comments
Advertisement

The Centre for Democracy and Development (CDD) says the incidents of violence can affect voters turnout during the governorship election in Kogi state.

In a statement jointly signed by Adele Jinadu, CDD chairman, and Idayat Hassan, the director, the organisation said the language being used by politicians in the state can affect voter confidence and the credibility of the process.

The CDD urged security agencies to protect the lives of the electoral officials and ensure that violence is curbed during the election.

“Less than 48 hours to November 16, 2019, Kogi State Governorship election, political actors have failed to de-escalate the tension, which had been building up in the State. Unfortunately, this has set the stage for what could be a very bloody electoral process, if urgent action is not taken to address the situation,” the organisation said.

“It is disheartening that political gladiators across the partisan divide have shown no apparent signs of refraining from using vitriolic rhetoric capable of inflaming passions, which could result in dire consequences for voter confidence and turnout and the credibility of the entire process.

“At the CDD Elections Analysis Centre, we believe the credibility of an election does not rest exclusively with happenings on the polls or outcome of the elections. To us, equally crucial is the nature of the environment heading into the polls, and mainly how it contributes to the unfettered participation of all stakeholders, especially political contestants in the process.

“Our findings from the observation of the pre-election environment point to a very volatile political environment, characterised by fierce rhetoric, threats of violence and actual incidents of violence.

“At the last count also, the threats of violence and actual incidents of violent disturbances, including the condemnable arson on the party secretariat of the Social Democratic Party (SDP) could have the effect of making voters stay away from the polls.”

TWITTER @thecableng
Copyright 2020 TheCable. All rights reserved. This material, and other digital content on this website, may not be reproduced, published, broadcast, rewritten or redistributed in whole or in part without prior express written permission from TheCable.
Tags
CDDKogiviolenceYahaya Bello
Advertisement