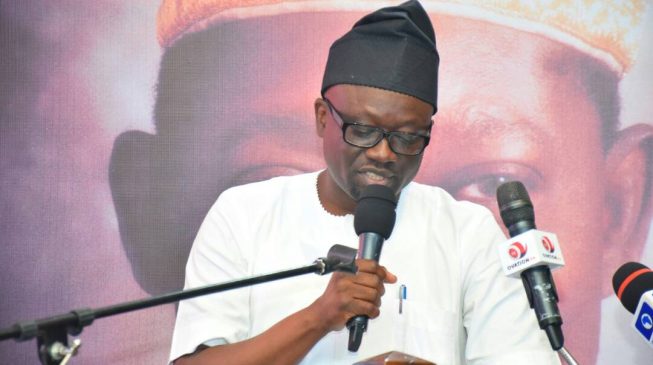 20:05 2019
Print This Article Share it With Friends
👤by TheCable  0 Comments
Advertisement

Simon Kolawole, founder and CEO of Cable Newspaper Ltd, publishers of TheCable, says journalism graduates could soon start playing second fiddle to quacks who have invaded the news media as a result of the digital revolution.

Delivering the 10th Doyin Mahmoud Annual Lecture at the department of mass communication, University of Ilorin, on Thursday, Kolawole said end users of news are increasingly depending on the social media, particularly Facebook and Twitter, for information.

“This would ordinarily not be a problem if the news being offered on these platforms conforms to professional standards. It would also not be a thing of concern if the average reader can see through the flaws, some of which are deliberately planted to spread fake news,” he said.

In his lecture titled “The Future of Journalism”, the former editor of THISDAY said there is a serious struggle between professional journalism and the “dubious” concept called citizen journalism “which is no journalism”.

“If care is not taken, the future of journalism will be dominated by quacks and the professionals will become outsiders. This is already happening and creating a serious crisis of confidence in the news media,” he said.

“Anybody with access to a smart phone and data now fancies himself or herself as a journalist. They go on websites and the social media to mine information and begin to reproduce. Before you know what is happening, they tell you they are ‘citizen journalists’ and begin to do damage to journalism.

“Let me be clear, though: I am of the view that you don’t have to study journalism to be a journalist. Some of the most respected journalists in Nigeria today did not study journalism or mass communication. However, there are two ways of learning: either in school or on the job… Anyone who has spent between one year and three years in a newsroom under a good editor will learn the important things about journalism.”

PREPARING FOR THE FUTURE

Kolawole said it is “most uncharitable” for anyone to just buy a smart phone and start writing whatever he or she likes and get classified as a journalist.

“They do not understand what it means to balance a story, they do not have access to news subjects to confirm whether or not a story is true, and they don’t even understand the laws of libel and the overall role of the mass media in the society,” he said.

“They write whatever they like under the umbrella of being citizen journalists and we all get abused together over the ‘falling standards of journalism in Nigeria’. To be sure, I do not want to suggest that the newspapers that are run by professionals are perfect, but at least they are answerable to processes and laws. Many of the websites that run libellous and fake stories do not even have a contact address. They do not answer to anybody.”

He gave the students tips on how to get ready for the future after school.

“One, you must possess all the necessary knowledge to be able to operate in the social media space. Whatever Twitter, Facebook and Instagram are used for, you must learn all the tricks of the trade so that you can take professionalism there. You have a duty as communicators to educate, to entertain and to inform the general public. What will mark you out in the commotion out there is the professionalism you bring to bear,” he said.

“Two, the digital media industry requires skill sets that you must have. You must be able to tell your stories in a multimedia format. You must be able to handle the camera very well, to take good pictures and make good videos. You must understand the visualisation of stories. You should be able to use graphs to communicate complicated figures and simplify story telling. With all these skills at your disposal, you will enter the profession with an added advantage above the pretenders. Otherwise, you will find yourself locked outside from your profession by those who should never have been inside in the first place.

“Three, you must carve a niche for yourself. Nigeria is filled with many journalists who are not subject-matter experts. You must be intellectually rich in the history and intricacies of the field you have chosen to play in.”

IN HONOUR OF A MEDIA GIANT

Kolawole, who could not attend the event because of an engagement outside the country, was represented by Afolabi Gambari, former features editor of National Mirror.

The lecture is held annually in honour of Mahmoud, late veteran journalist and former head of the department of mass communication at Unilorin.

He was the pioneer editor-in-chief of  Daily Independent Newspaper. He served as training manager at the Guardian Newspaper, after serving as deputy editor of The Sunday Newspaper.

He was also a former editor of The Herald newspaper.

Mahmoud died on September 20, 2009, at the University of Ilorin Teaching Hospital, aged 56.

Kolawole paid tribute to Mahmoud as a “media shaper, teacher and pioneer… It is very gratifying that 10 years after the departure of this great media icon in Nigeria, Africa and the Commonwealth, he is still shaping the future from his grave. That is what it means to have a legacy.”