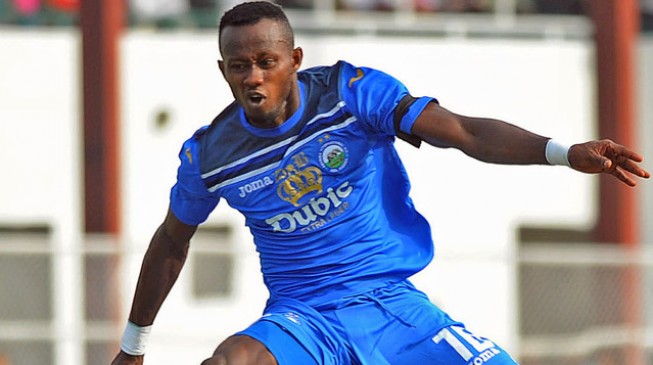 11:08 2014
Print This Article Share it With Friends
👤by Victor Akhidenor  0 Comments
Advertisement

Ahead of his move to Spain, Nigeria Professional Football League top scorer, Mfon Udoh of Enyimba of Aba, has expressed his happiness at being the first player to score 23 goals in a season in Nigerian football.

The 22-year-old striker, who got a brace in Enyimba’s 3-1 home win against champions Kano Pillars at the Enyimba Stadium on Sunday, broke the 20-goal mark record of Jude Aneke.

“Writing my name in the history books of the Nigeria Premier League makes me so glad, but it is so painful that we lost the championship to Kano Pillars,” Udoh told supersport.com.

“It would have been better for me to win the golden boot award coupled with the NPFL trophy, but I believe Enyimba would try hard next season. I know there would be serious competition next season among the strikers as I expect them to do better than I did, and I wish them good luck.”

The striker is already looking to further his career abroad and he’s eyeing a move to La Liga so as to test his goal scoring prowess with the likes of Cristiano Ronaldo and Lionel Messi.

“A lot of foreign clubs are interested in getting my signature, but I would like to go to Spain where a club is waiting for me over there,” he said.

TWITTER @thecableng
Copyright 2020 TheCable. All rights reserved. This material, and other digital content on this website, may not be reproduced, published, broadcast, rewritten or redistributed in whole or in part without prior express written permission from TheCable.
Tags
EnyimbaLa LigaMfon UdohNigeria Professional Football League
Advertisement

Buhari to Ghanaian president: We closed our borders due to influx of arms, hard drugs