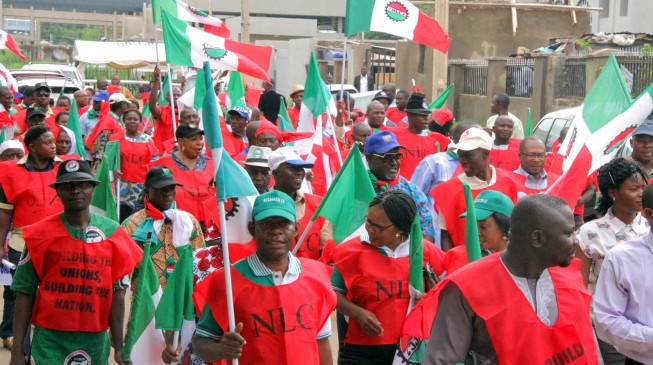 12:07 2016
Print This Article Share it With Friends
👤by TheCable  0 Comments
Advertisement

Activities were paralysed in different parts of Kano state on Thursday as a result of the ongoing strike of the Nigeria Labour Congress (NLC).

NLC was joined by Academic staff Union of Universities (ASUU) and other civil society groups.

The Audu Bako state secretariat, which opened earlier in the day, was closed after workers were prevented from gaining access to their offices.

Those who had entered their offices were chased out by the unionists who moved from one place to the other.

Students of government-owned primary and secondary schools were also told to return home, while academic activities were suspended at the Bayero University Kano.

He said Maigari Dikko, the commissioner of police, had met with the leadership of NLC and Trade Union Congress (TUC) to ensure the peaceful conduct of the strike.

“During the meeting, the labour unions assured the commissioner that they would not do anything that would cause trouble in the state,” he said.

He said the command had directed its officers and men to ensure professionalism in the discharge of their duties.

“They are warned not to use fire arms because we want peace to reign in the state,” Majiya said.

He, however, warned people to avoid acts capable of breaching the existing peace, saying the police would deal ruthlessly with any person or group that tried to foment trouble.

TWITTER @thecableng
Copyright 2019 TheCable. All rights reserved. This material, and other digital content on this website, may not be reproduced, published, broadcast, rewritten or redistributed in whole or in part without prior express written permission from TheCable.
Tags
ASUUkanoNLC
Advertisement