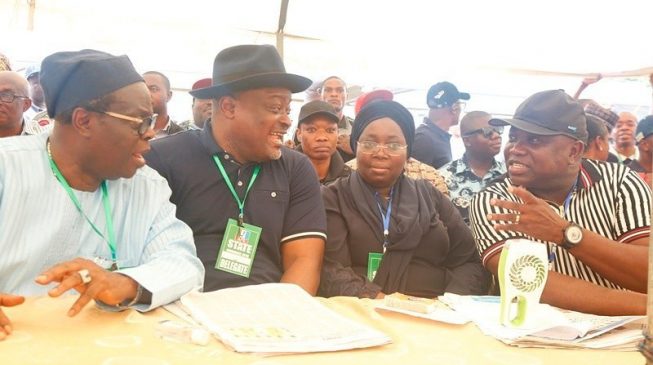 10:40 2018
Print This Article Share it With Friends
👤by News Agency  0 Comments
Advertisement

The Lagos chapter of  the All Progressives Congress (APC) has threatened y to sue the national working committee (NWC) for overruling the state’s congress conducted in the 57 council areas instead of 20.

Abiodun Salami, assistant publicity secretary of the party, issued the threat during an interview with NAN in Lagos.

He was reacting to the national working committee’s overruling of the main congress of APC held at the state headquarters of the party on May 19.

Another congress was convened at the same day by a chieftain, Fouad Oki on the grounds that the congress at the state headquarters lacked legal basis as it was conducted based on wards in 57 council areas instead of 20 approved by INEC.

Bolaji Abdullah, national publicity secretary of the party, had said that the party had begun work on Friday on the reports from the various appeal panels on the conduct of state congresses.

He said a meeting to resolve the issues had been held and that the Lagos APC faction loyal to Bola Ahmed Tinubu, a national leader of the party, which conducted its wards and local government congresses in 57 local council development areas had been overruled by the national leadership.

He said the state structure was, however, not handed over to Oki, who he said conducted his congress in accordance with the party laws.

He added that a five-man panel had been set up to dissect the constitutionality of the two congresses and that the panel, headed by the party’s deputy national chairman.

“Yes, we set up a panel to look at the issues in the Lagos chapter. Of course, we overruled those who conducted their congresses in 57 councils because the Constitution only recognises 20 councils,” he said.

“We could not have discountenanced those who conducted in 20 councils because that is constitutional . The issue in Lagos is about legality and constitutionality.”

Reacting, Salami described the NWCs decision on the main congress as mischievous, saying it was meant to scuttle things at the state’s chapter.

The spokesman said the chapter would challenge the decision in the court of law.

“We will challenge their decision at the court because there is a supreme court judgement in favour of Lagos state on 57 councils.

“We have been operating with 20 LG’s and 37 LCDA’s in Lagos before the formation of APC. The decision is not only mischievous but a deliberate way to scuttle the party in Lagos state.”

Salami said the real congress was the one held at the party headquarters in the presence of INEC and party officials.

He said the other congress lacked legal basis as no monitoring officer was present.

Salami accused Oki of double standards, wondering why the same person who was party’s vice chairman (central) when the party conducted council elections in 57 , councils was now complaining of illegality

Speaking to NAN, Oki said the decision of the party’s NWC to overrule the ACME congress vindicated him and his group.

“I have always said you cannot build something on nothing. What is wrong us wrong. I will continue to say that the constitutionally known local governments in Lagos is 20,” he said.

“And INEC recognises 245 wards. Therefore you cannot put up any illegality and expect it to hold.

“And if you look at their own congresses, you will see that they were full of contradictions and illegalities. The reaction of the NWC cannot be clearer. That is what we are seeing.

“We have a NWC that is committed to the Constitution, to the rule of law and the electoral act and that is why they are trying to put things right.”

Oki said he had been briefed that a committee was in the state to resolve the issues once and for all.

He, however, said he had not been invited, but hoped to be invited on Monday to defend his own congress.

ICPC: How we stopped the diversion of constituency items

ICPC: How we stopped the diversion of constituency items