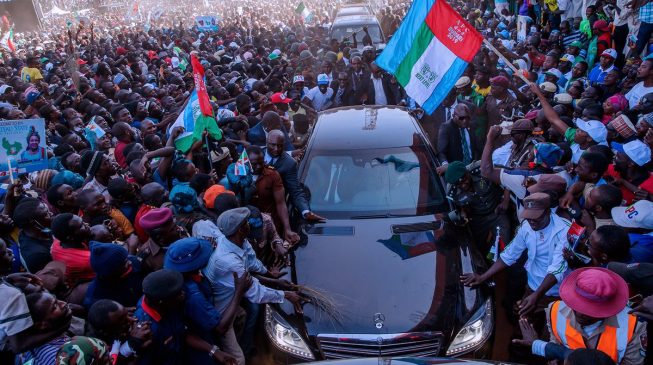 13:10 2019
Print This Article Share it With Friends
👤by News Agency  0 Comments
Advertisement

Simon Lalong, governor of Plateau, says President Muhammadu Buhari’s inability to address the crowd at the All Progressives Congress (APC) rally in Jos is nothing new.

Buhari, the presidential candidate of the APC, was in Jos on Saturday in continuation of his nationwide campaign for the elections.

According to NAN, the Rwang Pam Township Stadium, venue of the event, was jam-packed with party supporters.

The president was said to have been unable to address the crowd. After waiting for about an hour, he acknowledged the crowd by waving and left for Abuja.

Lalong, who fielded questions from state house correspondents in Jos, said a similar incident was recorded in 2011 and 2014 when he (Buhari) visited the state to campaign.

He said: “Well, I think this is unique to Plateau. In 2011, when he came (to Plateau) he couldn’t even come down. So he had to leave that way, he just greeted the crowd and left.

“In 2014 when he came we were able to manage the crowd for him to address them but before he got out of the stadium it was terrible for us.

“So, for Saturday’s rally we tried to manage the crowd, we did all we could but the crowd was too much and you saw it yourselves, this was not a hired crowd.

“This was a mammoth crowd that loves Mr President, natural love for Mr President. We did our best to manage the crowd but it was overwhelming.”

“In other words, the crowd can also say we don’t need anything. We have confidence, Mr President, go and finish your second term,” he said.

“I’m very well satisfied with the outcome of the rally because this is a way of our people saying Mr President even without addressing us we have confidence in you.”

TWITTER @thecableng
Copyright 2020 TheCable. All rights reserved. This material, and other digital content on this website, may not be reproduced, published, broadcast, rewritten or redistributed in whole or in part without prior express written permission from TheCable.
Tags
APCMuhammadu BuhariPlateauSimon Lalong
Advertisement