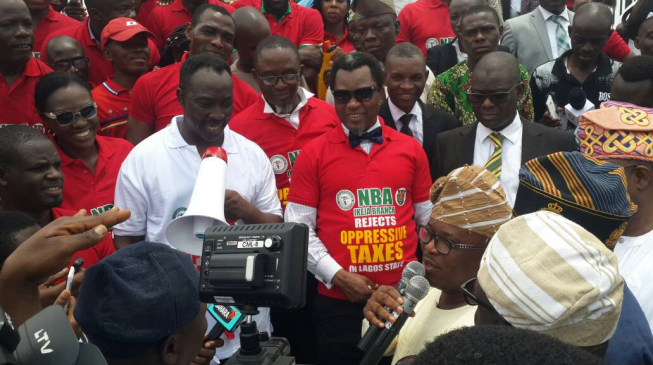 11:18 2018
Print This Article Share it With Friends
👤by Femi Owolabi  0 Comments
Advertisement

The Ikeja branch of the Nigerian Bar Association (NBA) has called on Lagos residents not to pay the new rates of the land use charge until the government “bows to the people’s will”.

Describing the reduction as a sham, the lawyers threatened to hit the streets again over the matter.

“The reduction is a sham, a farce and a fraud because the rates prescribed now subjected to reduction is based on a fraudulently extractive foundation,” Adesina Ogunlana, chairman of the association, said at a press conference.

“It is meant to hoodwink the people of Lagos and to present the façade that here, Governor Akinwumi Ambode’s government is a listening and sensitive government.

“When the government says it is slashing cost, they are only deceiving people. The amounts prescribed are mere fantasies of their imagination.”

Barely two days after the lawyers staged a protest over the upward review of the rates, Akinyemi Ashade, Lagos commissioner for finance announced the reduction.

Ashade said commercial property owners would get 50 percent discount, owner-occupier 25 percent, while there would be a waiver for late payment and tax credit for those who are prompt in payment.

But the lawyers are not satisfied with the government’s review.

They said from interactions, they found that Lagos residents are not against taxation and not even increase in taxation, but the conditions of their acceptance of taxes must be transparent, gradual and responsible.

They also gave the Lagos house of assembly a seven-day ultimatum to publish the proposed draft of the review land use charge law for interested residents and stakeholders to study, for adequate participation in public hearings that will precede any amendment.

Ogunlana said if the government refuses to consider their position on the matter, the lawyers will embark on another protest on 30, March, 2018.

The land use charge law, initially, wants a property solely occupied by the owner for a residential purpose to be charged at a rate of 0.076 percent per annum.

TWITTER @thecableng
Copyright 2020 TheCable. All rights reserved. This material, and other digital content on this website, may not be reproduced, published, broadcast, rewritten or redistributed in whole or in part without prior express written permission from TheCable.
Tags
Lagos land use chargeLagos State GovernmentNigerian Bar Association Ikeja Branch
Advertisement