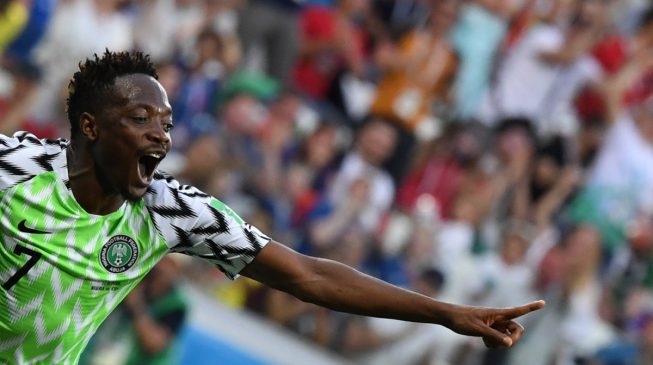 17:43 2018
Print This Article Share it With Friends
👤by Remi Sulola  0 Comments
Advertisement

A £12 million bid for Ahmed Musa, Super Eagles striker, by Saudi Arabia’s Al Nassr has been rejected by Leicester City.

According to Sky Sports, Leicester are keen on recouping majority of what was paid to sign the Nigerian from CSKA Moscow.

Musa joined The Foxes in July 2016 for a then club record fee of £16.6m and has only made 21 Premier League appearances, scoring two goals.

The 25-year-old was shipped out on loan in the second half of the 2017/18 English Premier League (EPL) season. Back in CSKA Moscow, he regained form and scored a number of goals.

Musa had a sterling performance at the just-concluded FIFA World Cup in Russia.

His second goal for Nigeria against Iceland has been nominated for goal of the tournament.

The striker became the first Nigerian footballer to score at different World Cups, increasing his goals tally to four.

TWITTER @thecableng
Copyright 2020 TheCable. All rights reserved. This material, and other digital content on this website, may not be reproduced, published, broadcast, rewritten or redistributed in whole or in part without prior express written permission from TheCable.
Tags
2018 FIFA World CupAHMED MUSAAl NassrGalatasarayLeicester CitySaudi ArabiaSuper Eagles
Advertisement