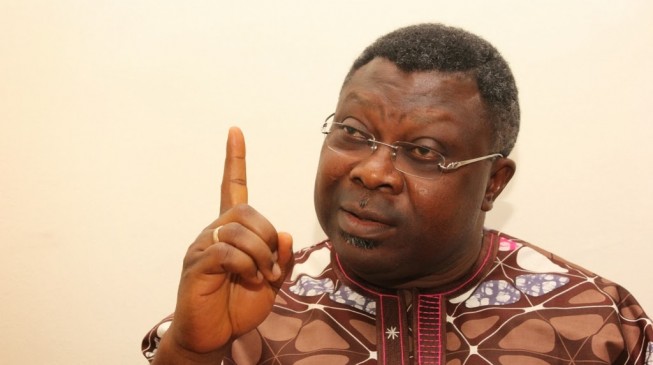 19:10 2016
Print This Article Share it With Friends
👤by TheCable  2 Comments
Advertisement

Iyiola Omisore, former deputy governor of Osun state, has accused the Economic and Financial Crimes Commission (EFCC) of blackmail, challenging the anti-graft agency to present evidence of corruption involving him in court.

The commission declared Omisore wanted earlier on Tuesday, saying he has refused to honour its invitation to make clarification on the alleged N700 million which he collected from the office of Sambo Dasuki, former national security adviser, between June and November, 2014.

But Omisore denied the allegation, saying the agency was out to tarnish his image.

He said it had become clear that the EFCC had turned into a tool that was being used to harass political opponents of the government in power.

“If the organisation and its leadership think they have any case against me, they should come to court with their facts,” he said in a statement.

“It is now very clear that the EFCC is indeed playing out the script of persecuting and harassing perceived opposition groups in the country.

“I am not aware of any issue relating to a contract sum of N700 million. There was no issue of N700 million anywhere. If they have facts, I challenge them to bring them to court and not resort to blackmail, intimidation and victimisation.

“This act of blackmail and deliberate tarnishing the image of perceived political enemies won’t help the image of the EFCC and it won’t get it result.

“I am appealing to all human rights and civil society organisations to caution EFCC from damaging my reputation further.”

Omisore wondered how the EFCC could declare him wanted after he and the commission were involved in a law suit earlier in the day.

“How can you declare someone you were in court with at 9am today wanted the same day, a few hours afterwards?” he asked.

“We appeared in court with the EFCC asking for the permission of the court for an extension of time in the preliminary objection to a suit filed against me.

“I am appealing to all human rights and civil society organisations to caution EFCC from damaging my reputation further.”

TWITTER @thecableng
Copyright 2020 TheCable. All rights reserved. This material, and other digital content on this website, may not be reproduced, published, broadcast, rewritten or redistributed in whole or in part without prior express written permission from TheCable.
Tags
EFCCiyiola omisoreOsun
Advertisement