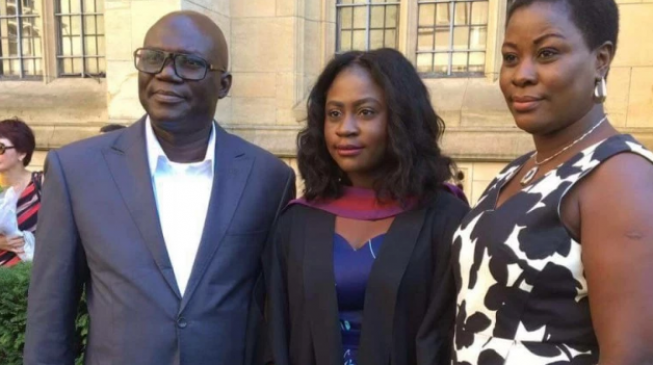 22:52 2016
Print This Article Share it With Friends
👤by TheCable  0 Comments
Advertisement

Elizabeth Abati, daughter of Reuben Abati, spokesman of former President Goodluck Jonathan, on Tuesday graduated with a distinction in Law from the University of Bristol in the United Kingdom.

Elizabeth’s father achieved the feat at the University of Calabar, 31 years ago.

Back in 1985, Abati was recipient of the vice chancellor’s prize for the student with the best overall academic performance in the graduating class.

The seasoned columnist was so excited about his daughter’s achievement that he took to social media to share the good news.

“Elizabeth Abati graduating from University of Bristol, Class of 2016, with a FIRST CLASS Honours in LAW. #Congratulations, Bebe,” he wrote.

Elizabeth Abati graduating from University of Bristol, Class of 2016, with a FIRST CLASS Honours… https://t.co/zaz0vgtGJH

TWITTER @thecableng
Copyright 2020 TheCable. All rights reserved. This material, and other digital content on this website, may not be reproduced, published, broadcast, rewritten or redistributed in whole or in part without prior express written permission from TheCable.
Tags
Elizabeth AbatiGoodluck Jonathanreuben abatiUniversity of Bristol
Advertisement