For the love of meat, you must read this! 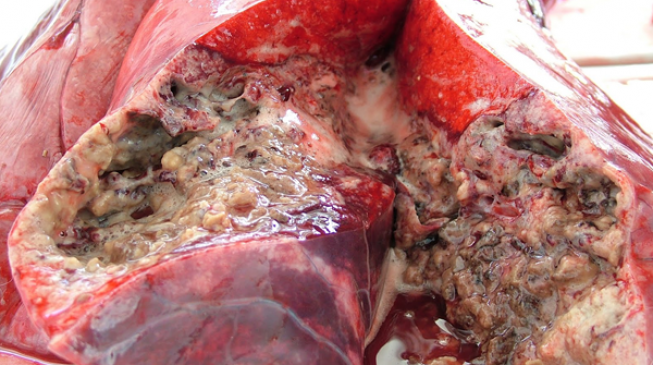 22:27 2017
Print This Article Share it With Friends
👤by Contributor  5 Comments
Advertisement

Nigeria is a country of meat-lovers. Across geographical locations, cultures, tribes, and socioeconomic status, almost every family consumes meat regularly in our country. “Meat” commonly refers to all kinds of animal carcass that have been slaughtered for consumption and as a source of animal protein.

Frequently, for the sake of preference and reference, we distinguish meat by their respective animals such as cattle meat (beef), goat meat, pig meat (pork) etc. Also, we consume the (fleshy) meat along with meat offal in Nigeria. Offal, (commonly known as inu eran in Yoruba language) refers to all edible organs of the animal apart from the (fleshy) meat. These include lung, liver, kidneys, spleen, small and large intestine, heart etc. These offal products are indeed common delicacies among Nigerian meat consumers as it is widely consumed to accompany various meals, soups, and stews. 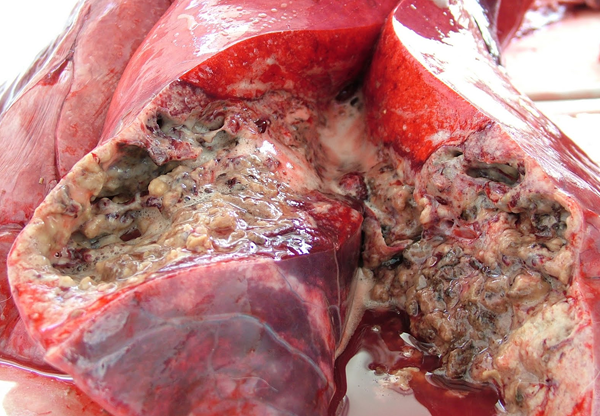 In many cases, when an animal has an ongoing infection or disease, the evidence of this infection can be seen in the affected internal organs of the animal’s body. This include all the offal products as listed above especially the intestines, lungs, liver, kidney, and heart. These signs of disease may be seen in these organs as tubercles (like in tuberculosis infections), presence of live worms and their eggs (like in worm infestations), abscess, change in normal coloration of organ, change in normal texture of the organ etc.

For an infected organto be sold as offal in Nigerian abattoirs, the main danger lies in the fact that these infections can be transferred to humans when they consume the meat offal. And for a country like Nigeria where little or no meat inspection is done and butchers commonly sell their unhygienic meat without supervision, consuming these infected offal is a remarkable health risk. Diseases that can be transmitted from consuming infected meat and offal may include tuberculosis, worm infections, salmonellosis, brucellosis, anthrax, protozoan infections etc., causing a variety of poor health symptoms and death in humans.

Out of these infections, worm infections and tuberculosis are considered the most commonly encountered in diseased offal and are most easily identified in Nigerian abattoirs and meat markets.

Worms are infectious parasites that cause harm by either taking nutrients meant for your body, sucking your blood, and/or destroying vital organs in the body. Worms can infect both humans and animals alike and as such can be transferred from animals to humans by consuming infected meat or offal. Depending on the type of worm, worms (and their eggs) can be present in almost any organ (meat or offal), but can be mostly found in small and large intestine, liver, lungs, kidney, and heart. Examples of worms that infect animals and can be transmitted to humans include tapeworms, flukeworms and roundworms. These worms are very dangerous to humans especially children, pregnant women and people with low immunity, causing a variety of clinical signs such as stomach pains, diarrhea, vomiting, weight loss and poor growth, cough, anemia, edema, and death. In severe cases, they reproduce and are highly populated in the person’s intestine such that they block the intestinal lumen or cause extensive damage to the body’s vital organs such as heart, lung, liver, brain and kidneys – leading to death of the person. 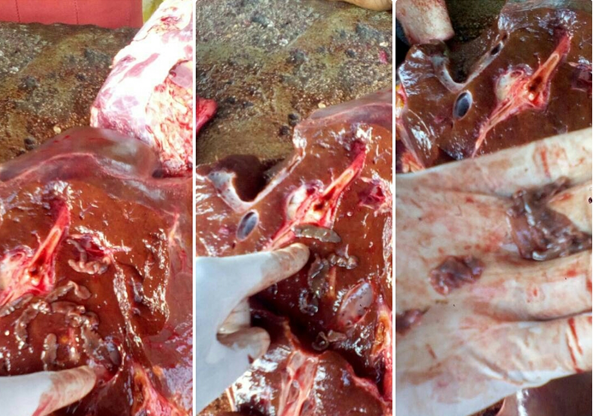 A liver infected with worms #AbattoirNigeria.jpg

A pointer to several live worms wriggling out of a liver that was just harvested from cattle slaughtered in a Nigerian abattoir. This liver was eventually smuggled out by the butchers to be sold to the public for consumption

Worm infections are highly ubiquitous among the animals slaughtered in Nigerian abattoirs, but  their meat is still sold to the public for consumption anyway. Some worms are large enough to be seen with the naked eye, wriggling out of the animal’s affected organs to escape while the animal is being butchered. Other worms cannot be easily seen with the naked eye in meat or offal. In all cases, it is most difficult to see the worms’ eggs with the naked eye. It is important to note that the eggs laid by the worms as part of their reproductive cycle remain as dangerous as the worms themselves, and can grow to become adult worms when transmitted to humans.

This video shows live worms wriggling out of the liver of cattle that was just slaughtered in a Nigerian Abattoir. These diseased organs are kept for sale by butchers for human consumption. Consumption of this liver as inu eran means that the worms and their eggs will be transmitted to the human. Worm infestation in humans has been known to have various deleterious health implications especially in children and pregnant women.

Have you ever been to the market to buy the offal – fuku (lung) or edo (liver)? And the fuku had some dark to grayish-white areas or elevations with some of them protruding out of the surface? And then the meat seller, in a bid to convince you that the meat is safe, cuts a little piece and pops into his/her mouth to chew? Or maybe you just love the feel of “strong, crunchy” fuku that you can chew like a biscuit and that will last longer in your mouth like chewing gum?

A lot of people from the Yoruba tribe in south-western Nigeria would instantly recognize the common phrase Fuku Elegusi. It is even considered a delicacy for some sellers and consumers as it is said to “last longer in the mouth” as opposed to the normal lung that has a shorter chewing time due to its softer spongy consistency. Recognizing this preference, some butchers attract their customers telling them that “the meat is fuku elegusi”.

Alas, Fuku Elegusi, is a serious health hazard for those who buy, cook, and consume it. In fact, in developed countries, the animal from which such fuku was harvested would be slaughtered and destroyed. But let’s come back to our reality in Nigeria…

Now, what is the implication of Fuku elegusi in health terms? 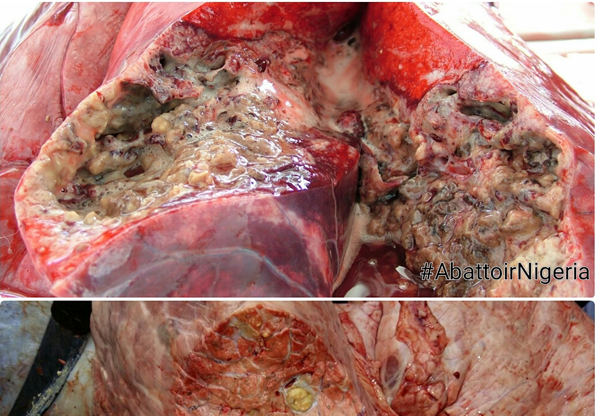 2 different lungs that were harvested from slaughtered cattle in 2 different Nigerian abattoirs. Though the first lungs (upper picture) was successfully condemned by meat inspection officers, the second lung was eventually smuggled out by the butchers to be sold to the public for consumption.

We should know that Tuberculosis (TB) is still a disease of high global priority due to its high prevalence and incidence worldwide, especially in sub-Saharan Africa. Also, the disease is common as a co-infection in people living with HIV and those with low body immunity. WHO mentioned that in Nigeria, there is high prevalence of TB in humans, stating that in 2014, about 160,000 people in Nigeria had died from TB while 570,000 were living with TB. Now, the percentage of those who got Bovine TB (TB from cattle that produces our ‘meat’) is largely unknown, but it is key to note that Bovine TB and Human TB (TB transmitted between humans) have the same clinical signs and manifestation and is difficult to distinguish which is Bovine TB or Human TB

Once tuberculosis infection is established in the body of an animal or human, it spreads to sites and organs in the body such as lungs, liver, kidney and intestines. In her peer-reviewed research article, Dr. Dupe Hambolu corroborated the high risk, customary behavior of eating Fuku Elegusi among butchers and she interviewed butchers in Oko-Oba Abattoir in Lagos State. She found out that almost a quarter of the study participants actively ate Fuku Elegusi and more than 70% of the study participants did not know that eating Fuku Elegusi could be a source of Bovine TB in humans. It is important to note here that Lagos is one of the most literate and urban cities in Nigeria. Therefore, there is a strong possibility that these unhealthy acts and lack of knowledge on Fuku Elegusi is more pronounced in less urban and rural parts of the country. 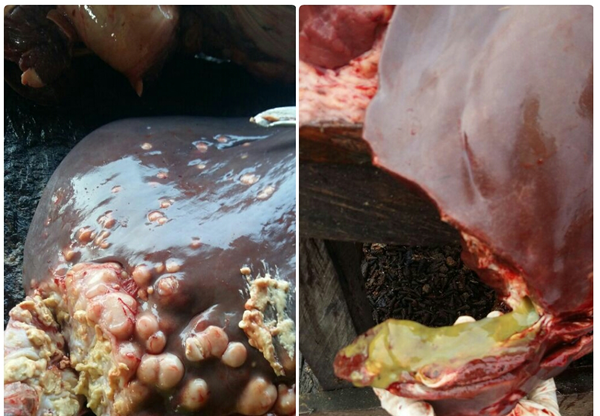 These two kidneys were just harvested from two slaughtered cattle in a Nigerian abattoir. This liver on the left was confirmed to have tubercles from a tuberculous infection, while the liver on the right has been completely damaged by an unconfirmed infection. Both were eventually smuggled out to be sold to the public for consumption.

It is important that for your own health and safety, you must watch out for infected meat/offal and avoid them AT ALL COST. By stopping the consumption of meat and offal infected with worms, tuberculosis and other diseases, you would be protecting your own health and preventing the spread of such diseases to others. Furthermore, you should spread the word and educate others, even as you visit your favorite butcher and meat seller in the market. Be sure to examine thoroughly the kind of meat and offal (inu eran) you purchase for your consumption. If you are not comfortable with the appearance of any animal product, DON’T BUY IT, no matter the amount of pressure mounted on you to buy or the ‘marketing skills’ of the seller.

As shown in this video, we advocate that for your health’s sake, be vigilant and careful on the kind of meat you eat. Protect yourself from infections in infected meat

More importantly, since we don’t currently have an enforcement of rules and regulations for meat inspection and meat hygiene in Nigeria, you must cook your meat and offal very well to ensure that to the best of your ability, pathogens are killed and rendered inactive in your body. Note that cooking your meat does not kill all pathogens as some pathogens remain resistant to heat and can still be transmitted to humans by consuming the infected meat. Also, remember that although some animals, meat and offal may seem healthy to eat; some may be harboring infections and parasites that are yet to physically manifest and be recognized.

This is a time to unite and advocate for an enforced standardized process of meat hygiene in Nigeria. A lot is going on in these abattoirs that is currently affecting the health of Nigerians and if care is not taken, we might soon have an epidemic and huge public health issue to contend with – if that is not already the case now.

Therefore, you can participate in our discussions on social media – Facebook, twitter and Instagram – using the hashtag #AbattoirNigeria. Together, we can work together to change this sad narrative in our abattoirs and poor meat hygiene, to get the government and stakeholders to be more proactive on this issue, and to know the basics of recognizing and distinguishing between good meat and bad meat. We need to know that as we are enjoying a bite from our delicious inu eran, we are also being guaranteed a healthy inu eran too.

Share and transfer this knowledge as much as you can and join the conversation with #AbattoirNigeria. Let us work together in achieving better food security and a healthier lifestyle for ourselves.

This investigative report is being supported by the Code4Africa #ImpactAfrica project

TWITTER @thecableng
Copyright 2020 TheCable. All rights reserved. This material, and other digital content on this website, may not be reproduced, published, broadcast, rewritten or redistributed in whole or in part without prior express written permission from TheCable.
Tags
Meat
Advertisement