Magnus Abe: Amaechi humiliated me before my wife 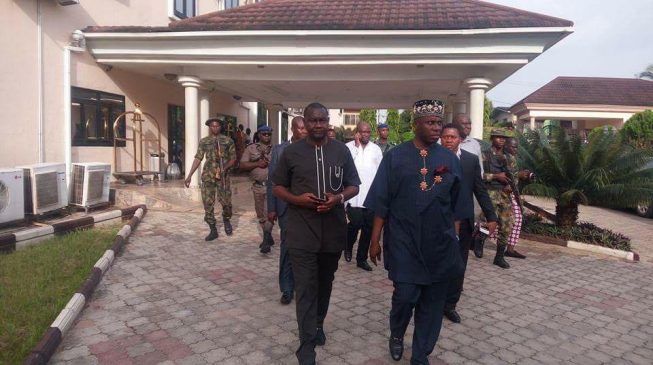 16:57 2018
Print This Article Share it With Friends
👤by Dyepkazah Shibayan  0 Comments
Advertisement

Abe said the “unacceptable” episode played out in his house, in the presence of his wife.

The minister and senator have been at loggerheads over the All Progressives Congress (APC) structure in Rivers.

Amaechi is backing Tony Cole, co-founder of Sahara Group, who is the APC’s recognised governorship candidate.

Speaking with The Interview Magazine, Abe said his insistence to contest the Rivers governorship election is the root of his disagreement with Amaechi.

“My disagreement with the minister is that he said I should not run and I said I would run. I said since you are the leader of the party, create an atmosphere where everybody can participate as party members and contest.

“I would have been celebrated for the number of votes that I got. And I was ready for that. But to say I will not be allowed to contest; to come to my house, call me in front of my wife and tell me not to try contesting… I said no, I will not accept that one. I will contest. And I will contest.

“So, there are certain things, you don’t skew the narrative to arrive at a pre-determined conclusion. I am a democrat. I am very, very satisfied with the distance my God has taken me and where he has placed me as far as this country is concerned.”

The senator said the politics of hatred must be brought to an end.

TWITTER @thecableng
Copyright 2020 TheCable. All rights reserved. This material, and other digital content on this website, may not be reproduced, published, broadcast, rewritten or redistributed in whole or in part without prior express written permission from TheCable.
Tags
APCMagnus Aberotimi amaechi
Advertisement