Magu: We recovered over N500bn in two years 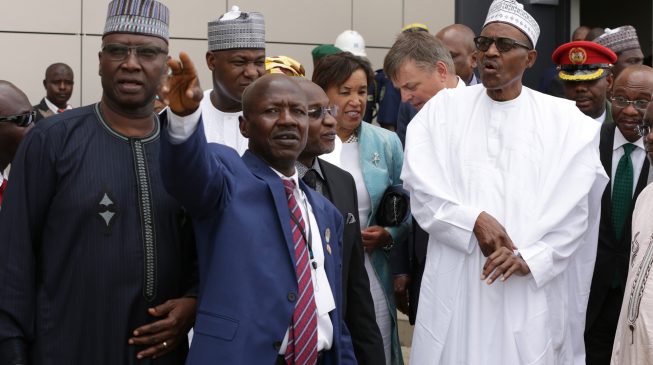 19:53 2018
Print This Article Share it With Friends
👤by Dyepkazah Shibayan  0 Comments
Advertisement

Ibrahim Magu, acting chairman of the Economic and Financial Crimes Commission (EFCC), says the anti-graft agency has secured 486 convictions and recovered over N500 billion in two and half years.

Magu said this on Tuesday at the commissioning of new headquarters of EFCC in Abuja.

According to him, the EFCC is also making giant strides in high profile cases including the conviction of a senior advocate of Nigeria (SAN).

The acting chairman said the commission would not go after the innocent but those who have looted funds.

“From January to date, we have secured 89 convictions, 486 convictions in two and half years and recovered over N500 billion,” he said.

“We do not go against the innocent but after those who have stolen. There is no better time than now to fight corruption so that the international community will no longer view Nigeria as fantastically corrupt.

“We owe the conducive environment to fight corruption to the political will of Mr President. This edifice can stand side by side with others in developed world.

“The fight against corruption is everybody’s fight and if we do so there will be no hiding place for the corrupt.”

Baroness Patricia Scotland, secretary-general of Commonwealth, said it was a thing of pride that country recovered more money in a year than in 10 years.

“It is a thing of pride that agency has recovered more money in one year than in 10 years,” Scotland said.

“We hope this building will not only accommodate the angels but also send all the crooks to prison.”

TWITTER @thecableng
Copyright 2020 TheCable. All rights reserved. This material, and other digital content on this website, may not be reproduced, published, broadcast, rewritten or redistributed in whole or in part without prior express written permission from TheCable.
Tags
convictionsEFCCIbrahim MaguN500bn
Advertisement