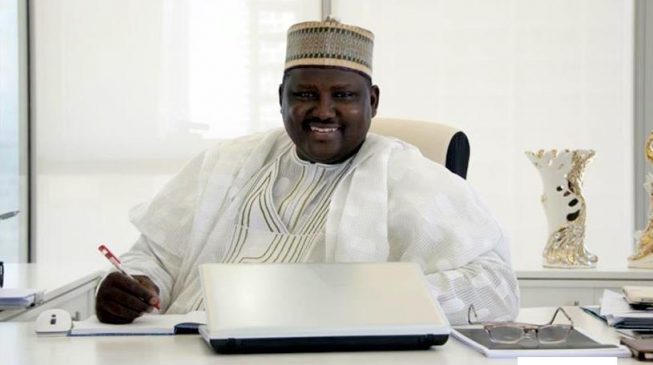 07:05 2019
Print This Article Share it With Friends
👤by Bolanle Olabimtan  0 Comments
Advertisement

Mairo Bashir,  a witness in the ongoing trial of Abdulrasheed Maina, former chairman of the Pension Reform Task Team (PRTT), told a federal high court on Friday that Maina’s sister was the certified owner of one of the bank accounts allegedly used to launder money.

Bashir, who was the first prosecution witness presented by the Economic and Financial Crimes Commission (EFCC), is a business manager in the bank.

She told the court that although Maina’s sister’s name was used to open the account, the defendant himself was the one operating the account.

“Abdulrasheed Maina is the one operating common input and property investment limited account. What he did was that he presented the picture of his sister, Fatima Abdulahi Samaila, on the certificate of incorporation but the signature was for Maina,” she said.

“The only time contact with Fatima was when he told me to call her to give me  her BVN number.”

Under cross-examination by Esther Uzoma, Maina’s counsel, Bashir said she only got to find out that Maina was the signatory to the account when he visited her at her office and signed a cheque.

When asked if she reported the situation to the bank authorities or relevant agencies, she said: “I did not inform the institution so they did not know.”

She said that she carried on with the defendant’s transactions with a “drive for deposit”.

Bashir also admitted that she was related to Maina and that he bears her son’s educational responsibilities in Dubai.

Maina is facing charges up to 12 counts bothering on money laundering to the tune of over N2 billion.

TWITTER @thecableng
Copyright 2020 TheCable. All rights reserved. This material, and other digital content on this website, may not be reproduced, published, broadcast, rewritten or redistributed in whole or in part without prior express written permission from TheCable.
Tags
Abdulrasheed MainaEFCCFaisal Maina
Advertisement