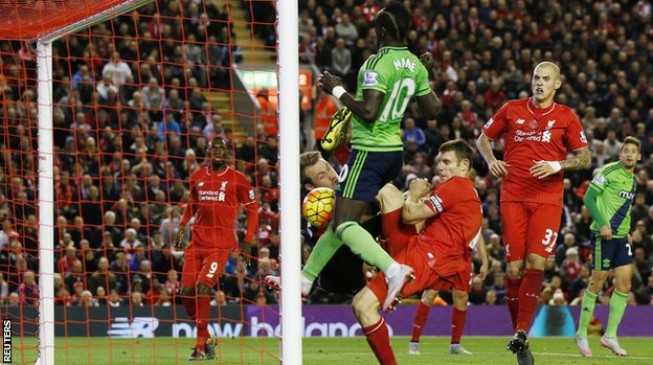 21:33 2015
Print This Article Share it With Friends
👤by Victor Akhidenor  0 Comments
Advertisement

The Reds dominated possession at Anfield and took the lead when Christian Benteke headed in James Milner’s cross from the right.

But with four minutes left, Mane bundled in when Gaston Ramirez’s header across goal was palmed by keeper Simon Mignolet into the body of the forward.

Mane was then sent off in stoppage time after picking up two late yellows.

The draw moves the Saints up to eighth, with Liverpool up to ninth and level on 14 points.

Manchester United and Manchester City played out a draw in their derby at Old Trafford.

City returned to the top of the Barclays Premier League ahead of Arsenal on goal difference – but there was little else to celebrate in a boring game devoid of attacking quality.

United had the better chances of going ahead as substitute Jesse Lingard hit the bar late on and City keeper Joe Hart saved well from Chris Smalling.

TWITTER @thecableng
Copyright 2020 TheCable. All rights reserved. This material, and other digital content on this website, may not be reproduced, published, broadcast, rewritten or redistributed in whole or in part without prior express written permission from TheCable.
Tags
Barclays Premier LeagueLiverpoolManchester Citymanchester unitedSouthampton
Advertisement

Another pipeline explodes in Lagos