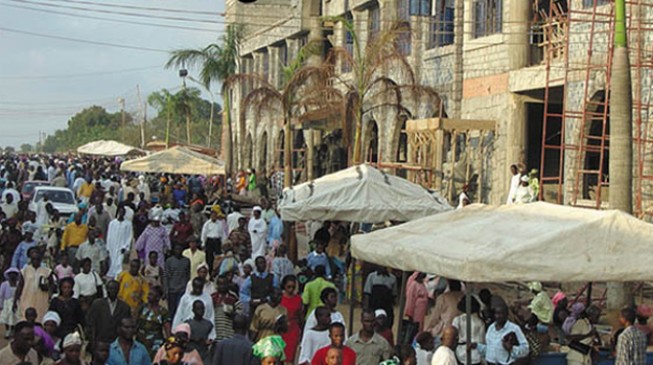 17:36 2014
Print This Article Share it With Friends
👤by Taiwo George  0 Comments
Advertisement

There was commotion at the Ikotun Egbe axis of Lagos on Friday, as a building within the headquarters of the Synagogue Church of All Nations, collapsed, killing a number of people still unknown.

A resident of the area told TheCable that the incident occurred around 1: 50pm.

“A guest house within the church premises collapsed this afternoon, but no one can say for now how many people are trapped or how many are dead.”

Considering the church’s reputation for drawing followership from from all over the world, another source told TheCable that the casualty toll would “certainly be high” because the building is normally reserved for foreign guests and more than 70 of them were present when the incident occurred.

He said  the church management had barred people from anywhere close to the building, save rescue officials who were on ground as ambulances arrived to convey people out of the church.

The building collapse happened on a day of tragedies in different parts of the state.

While a lady was shot dead on her way to work at the Idimu axis of the state, residents of Magodo, another Lagos suburb, woke up to see the corpse of a lady who committed suicide.

The deceased, a Liberian, was said to have taken her life following “Ebola stigmatisation” by her neighbours, who had been reportedly avoiding her since Patrick Sawyer introduced Ebola into the country.

The woman was said to have been ill before Sawyer’s visit; nevertheless, her neighbours began treating her like an Ebola victim.

Elsehwere, a truck fell on a private car around Toyota axis of the Oshodi-Apapa expressway, causing heavy gridlock, while a lady was knocked down by a vehicle at Palmgroove bus stop along Ikorodu road.

TWITTER @thecableng
Copyright 2020 TheCable. All rights reserved. This material, and other digital content on this website, may not be reproduced, published, broadcast, rewritten or redistributed in whole or in part without prior express written permission from TheCable.
Tags
lagosnigeriaSynagogue Church of All NationT.B Joshua
Advertisement