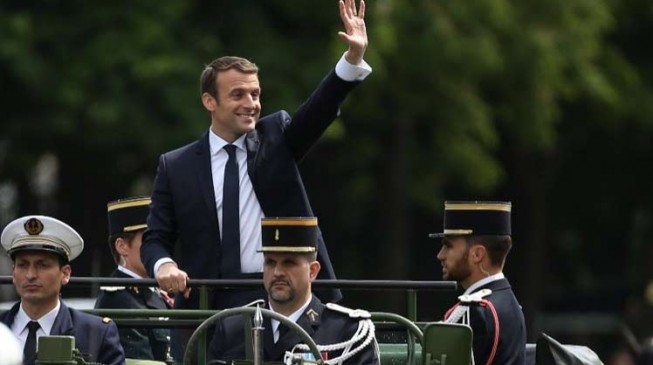 15:38 2017
Print This Article Share it With Friends
👤by News Agency  0 Comments
Advertisement

Emmanuel Macron became the youngest president in French history on Sunday when he officially took office following a ceremony at the Elysee Palace in Paris.

Macron, a 39-year-old social-liberal who beat far-right National Front leader Marine Le Pen with support from the political right and left, laid out the goals of his presidency in a speech that signalled his readiness to move forward with reforming the European Union.

“We need a more efficient, more democratic, more political Europe, because it is the instrument of our strength and our sovereignty,” Macron said, adding that he wanted to help the French people regain their self-confidence.

Macron’s presidency represents a break with traditional politics in France. He ran independent of the country’s established parties – centre-left Socialists and the centre-right Les Republicains – and instead founded his own centrist political movement, En Marche! (Forward!).

France’s new leader takes over from Francois Hollande, whose record-low levels of support prevented him from seeking re-election.

Macron is seeking to kick-start the French economy and overcome the sense of political malaise gripping the country.

“It will be slow work, demanding but indispensable,” Macron said.

Hollande hosted Macron for a final private conversation at the Elysee Palace before his departure.

Following the ceremony, Macron was driven down Paris’ iconic Champs-Elysees boulevard in an open military vehicle, accompanied by troops on horseback and a motorcade for the ritual journey from the Elysee Palace to the Arc de Triomphe.

The Champs-Elysees was lined with numerous French flags as Macron’s supporters cheered for the new president, who the end of the procession laid a cross at the Tomb of the Unknown Soldier beneath the Arc de Triomphe.

A committed European, Macron is expected to underline his support for a strong alliance with Germany on Monday when he heads to Berlin for a meeting with Chancellor Angela Merkel. He is also expected to name a prime minister on Monday at the latest.

TWITTER @thecableng
Copyright 2020 TheCable. All rights reserved. This material, and other digital content on this website, may not be reproduced, published, broadcast, rewritten or redistributed in whole or in part without prior express written permission from TheCable.
Tags
Elysee PalaceEmmanuel MacronfranceParis
Advertisement

Two rockets land near US embassy in Iraq

We are ready to embrace peace, says Trump