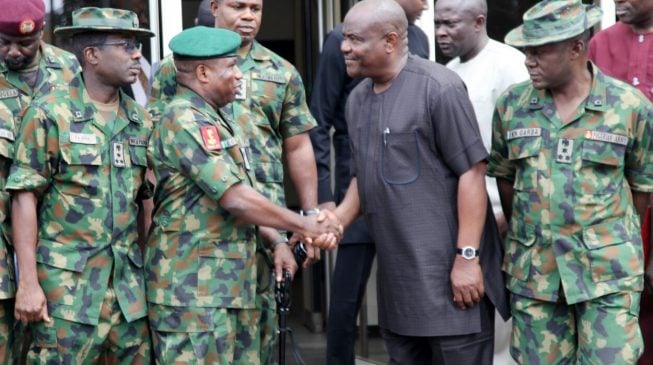 02:48 2020
Print This Article Share it With Friends
👤by Femi Owolabi  0 Comments
Advertisement

Nyesom Wike, governor of Rivers state, says the military has lost its integrity.

Speaking at Saint Peter’s Anglican Church, Rumuepirikom, during an inter-denominational service to mark the 2020 Armed Forces Remembrance Day Celebration, the governor said “some unprofessional personnel” have put the reputation of the Nigerian Army on the line.

He said Nigerians will not honour security operatives who snatch ballot boxes during elections.

“We are not honouring those who are unprofessional and carry ballot boxes to influence the electoral process,” he said.

“Those who come to rig election or kill Rivers people, Heaven will never remember them.”

The governor also said Mahmood Yakubu, chairman of the Independent National Electoral Commission (INEC), validated his claim that security agencies were responsible for electoral malpractices in the 2019 elections.

“I thank God that the chairman of INEC has owned up that the problem with elections are the security agencies. This confirms all I have said in the past,” the governor said.

Calling on the authorities to reward hardworking soldiers, Wike added that insurgents and kidnappers would have over the country if not for the bravery efforts of the soldiers.

During the 2019 general election, soldiers were accused of high handedness in Rivers. Some soldiers had invaded the residence of one of Wike’s commissioners, while some of them also attempted to take over INEC head office in the state during collation of results.

TWITTER @thecableng
Copyright 2020 TheCable. All rights reserved. This material, and other digital content on this website, may not be reproduced, published, broadcast, rewritten or redistributed in whole or in part without prior express written permission from TheCable.
Tags
Nyesom WikeRemembrance day
Advertisement