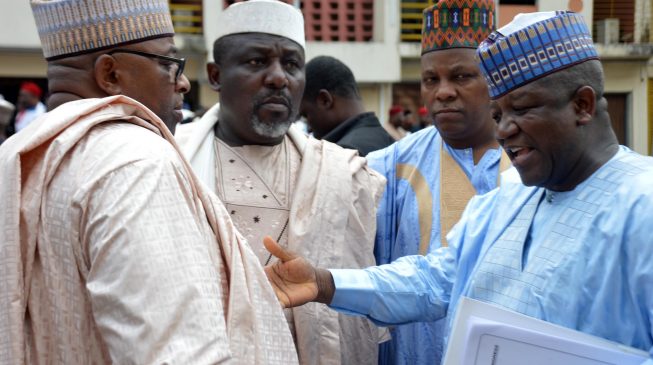 21:57 2018
Print This Article Share it With Friends
👤by Jamilah Nasir  0 Comments
Advertisement

Governors have agreed to increase the minimum wage but not up to the expectation of the Nigeria Labour Congress (NLC).

According to Abdulaziz Yari, governor of Zamfara and chairman of the Nigeria Governors’ Forum (NGF), he and his colleagues have agreed to pay N22,500 to workers.

Yari explained that the acceptable minimum wage “must be done in such a way that total personnel cost does not exceed 50 percent of the revenue available to each state.”

The governor said the forum is more concerned with the development in infrastructure, health, educational sectors.

“The welfare of all Nigerians is our ultimate concern. In all our States, we are concerned about the deteriorating economic situation experienced by the vulnerable segment of our population,” Yari said.

“In agreeing to a National Minimum Wage however, the Forum is even more concerned about development, particularly in the health, education and infrastructure spheres.

“It is therefore our considered position that since the percentage of salaried workers is not more than 5 percent of the total working population, our position must not just reflect a figure, but also a sustainable strategy based on ability and capacity to pay, as well as reflective of all our developmental needs in each state.

“Afterall, Section 3 of the National Salaries Income and Wages Commission Act provides that ‘the Commission shall recommend a proposition of income growth which should be initiated for wage increase and also examined the salary structure in public and private sector with reasonable features of relativity and maximum levels which are in consonance with the national economy.

“It is in this sense that we feel strongly that our acceptable minimum wage must be done in such a way that total personnel cost does not exceed 50 percent of the revenue available to each State.

Organised labour had demanded an upward raise of the minimum wage from N18,000 to N30,000, an amount the federal government said was not feasible.

The federal government, had instead, proposed 24,000. The state governments had earlier suggested N20,000 but labour rejected both proposals.

On Monday, the meeting the federal government conveyed to discuss new minimum wage ended on an inconclusive note.

Labour has threatened to declare a nationwide strike if government fails to meet its demand.

TWITTER @thecableng
Copyright 2019 TheCable. All rights reserved. This material, and other digital content on this website, may not be reproduced, published, broadcast, rewritten or redistributed in whole or in part without prior express written permission from TheCable.
Tags
minimum wagengfYari
Advertisement