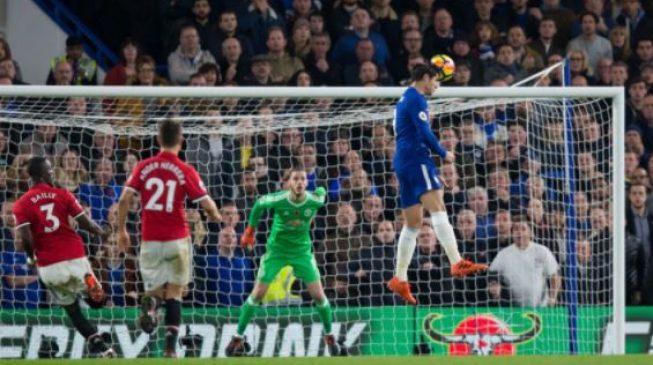 20:14 2017
Print This Article Share it With Friends
👤by Remi Sulola  0 Comments
Advertisement

An injured Victor Moses cheered from the bench as Chelsea defeated rivals Manchester United 1-0 at the Stamford Bridge on Sunday.

Chelsea, who slumped to a disappointing midweek Champions League defeat in Rome, were the better side in the first forty-five minutes although it ended goalless.

The deadlock was broken in the 55th minute by Alvaro Morata.

César Azpilicueta lobbed the ball to Morata and the Spaniard, under no pressure from United’s defenders, headed into the top corner for his seventh Premier League goal of the season.

Manchester United needed a win to keep up the pace with leaders Manchester City but with the loss, Jose Mourinho’s men are now eight points behind their city rivals.

The Red Devils have now lost twice this season; to Huddersfield and Chelsea.

TWITTER @thecableng
Copyright 2020 TheCable. All rights reserved. This material, and other digital content on this website, may not be reproduced, published, broadcast, rewritten or redistributed in whole or in part without prior express written permission from TheCable.
Tags
Alvaro MorataAntonio ConteChelseaJose Mourinhomanchester unitedSportVictor Moses
Advertisement