‘Soldiers will be tough this time’ — Buratai warns ‘election riggers’ 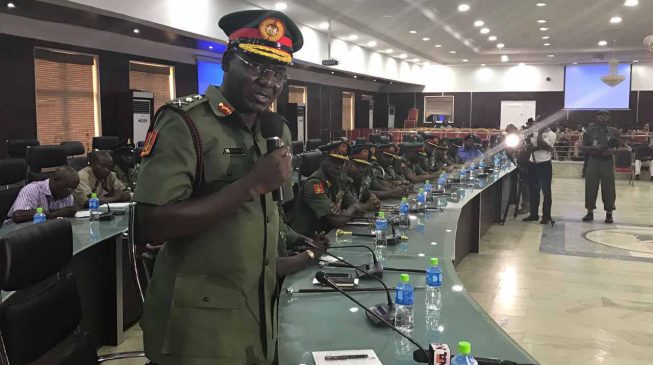 13:35 2019
Print This Article Share it With Friends
👤by Femi Owolabi  0 Comments
Advertisement

Ahead of the Saturday governorship and house of assembly elections, Tukur Buratai, the chief of army staff, says intelligence gathered has shown that politicians have plans to disrupt the process.

He made this known on Wednesday during a meeting with principal staff officers and commanders of the Nigerian army.

While noting the cases of violence outbreak in some parts during the presidential election, the army chief said his men would be going harder this time on politicians who attempt to interfere with the process.

“Recent security threat assessment and analysis of the coming elections showed that politicians have made plans to use all means available to truncate the peaceful conduct of the elections,” he said.

“There are indications of their intent to take advantage of and to use the farmers/herders crisis, armed political thugs and ethnic militias to perpetrate acts of violence including bombings. Some of them also intend to infiltrate domestic staff of political opponents, employ mercenaries to carry out acts of assassinations, use the social media for smear campaigns, hate speeches and spread fake news in a bid to disrupt the peaceful conduct of the elections. We must not allow them to succeed.

“Let me reiterate that the NA will enforce all guidelines in support of the Nigeria Police Force to ensure the peaceful conduct of the elections in line with its constitutional roles.  I therefore want to remind us all not to rest on our oars. We shall not allow those who are determined to   undermine   our   electoral   process   to succeed.   These forthcoming gubernatorial and state assembly elections are very crucial. These are elections that touch on the interest of the people at the grassroots and could likely be volatile in nature.

“During the course of the recently concluded elections, troops of the Nigerian Army were able to make arrests of persons who perpetrated acts of electoral offences. These suspects have been handed over to the police for prosecution.  I want to state, and categorically warn that the Nigerian Army will not tolerate any acts that will undermine national security. This time around we shall be tough on those who plan to rig or disrupt the electoral process.”

In February, President Muhammadu Buhari had given a directive for security operatives to deal ruthlessly with ballot box snatchers. And while the opposition condemned this, the army had said it would go with the president’s order.

TWITTER @thecableng
Copyright 2020 TheCable. All rights reserved. This material, and other digital content on this website, may not be reproduced, published, broadcast, rewritten or redistributed in whole or in part without prior express written permission from TheCable.
Tags
2019 general electionballot boxNigerian ArmyTukur Buratai
Advertisement