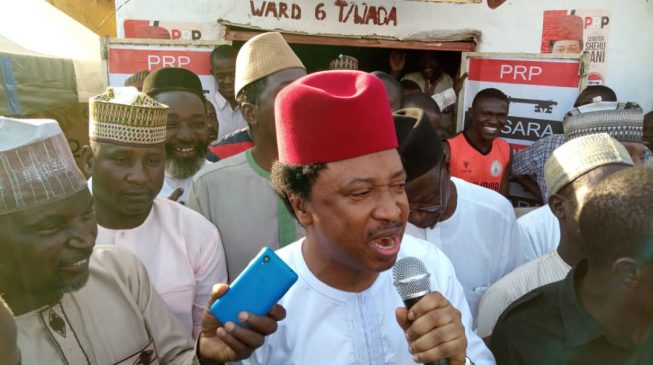 18:14 2019
Print This Article Share it With Friends
👤by Ebunoluwa Olafusi  0 Comments
Advertisement

Shehu Sani, former senator representing Kaduna central, has asked the federal government not to empower Nigerians returning from South Africa with N10,000, the amount given to beneficiaries of Trader Moni.

TraderMoni, a collateral-free loan for petty traders and artisans, is under the federal government’s National Social Investment Programme (Ń-SIP) coordinated by the office of Vice-President Yemi Osinbajo.

In a tweet, Sani asked the federal government to make adequate arrangements for those who decide to return to Nigeria to start a new life as a result of the xenophobic attacks in South Africa.

“The FG should make adequate arrangements and give reasonable support to Nigerians who decided to return home and begin a new life… and abeg don’t even think of linking them up with VP’s Tradermoni 10k …biko!” he tweeted.

The FG should make adequate arrangements and give reasonable support to Nigerians who decided to return home and begin a new life..and abeg don’t even think of linking them up with VP’s tradermoni 10k..biko!

Ferdinand Nwonye, spokesman of the ministry of foreign affairs, had announced the plan of Air Peace to evacuate Nigerians who wish to return to Nigeria free of charge.

But Allen Onyema, chairman of Air Peace, had said the evacuation which was planned to commence from Friday, suffered a setback because a majority of those interested in the process have expired passports.

As of Monday over 400 Nigerians reportedly indicated interest to be evacuated from South Africa following the attacks on foreigners.

President Muhammadu Buhari has ordered the voluntary evacuation of Nigerians in South Africa.

The president gave the directive after receiving the report of the special envoy he sent to South Africa over the attacks.

TWITTER @thecableng
Copyright 2020 TheCable. All rights reserved. This material, and other digital content on this website, may not be reproduced, published, broadcast, rewritten or redistributed in whole or in part without prior express written permission from TheCable.
Tags
FGNigeriansshehu saniTraderMoniXenophobia
Advertisement