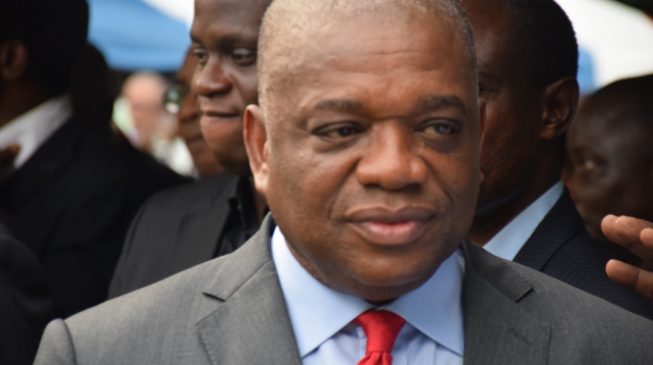 19:08 2019
Print This Article Share it With Friends
👤by Dyepkazah Shibayan  0 Comments
Advertisement

Orji Uzor Kalu, a former governor of Abia state, has opened defence in an alleged N7.6 billion fraud case levelled against him at the federal high court in Lagos state.

Kalu opened his defence after a no-case submission which he filed was dismissed by Mohammed Idris, the judge, handling the matter.

The Economic and Financial Crimes Commission (EFCC) had closed its case on May 11 after calling 19 witnesses but instead of opening his defence, Kalu filed a no-case submission.

The ex-governor is standing trial alongside Ude Udeogu, an ex-commissioner for finance in Abia and Slok Nigeria Limited, his company, bordering on money laundering to the tune of N7.6 billion.

The senator representing Abia north allegedly committed the offence between August 2001 and October 2005 while in office as governor.

At the court on Monday, Awa Kalu, counsel to the defendant, said he would not be available in court because of his involvement in some election petition matters.

“The election petition matters are constrained by time as stipulated in the Constitution and the time for concluding election matters cannot be extended by any court,” the counsel said.

He also told the court that he had to “rush down” to Lagos from Abuja without the case file because his secretary, whom he said is bereaved, could not prepare the case file.

The defendant counsel then asked the court for a short adjournment for the defence to open its case.

In response, Rotimi Jacobs, EFCC counsel, argued that the defence could still open its case.

The judge noted that there had been a prior notice to all the parties in the matter, adding that the hearing of the case should resume.

Thereafter, Kalu took to the dock to open his defence.

The senator told the court his name and stated that he was a manufacturer of home goods until he resigned some weeks ago to become a lawmaker.

After that, Kalu’s lawyer re-applied for an adjournment of the case.

His prayer was granted and the matter was adjourned till August 26.

TWITTER @thecableng
Copyright 2020 TheCable. All rights reserved. This material, and other digital content on this website, may not be reproduced, published, broadcast, rewritten or redistributed in whole or in part without prior express written permission from TheCable.
Tags
EFCCLagos federal high courtOrji Uzor Kalu
Advertisement