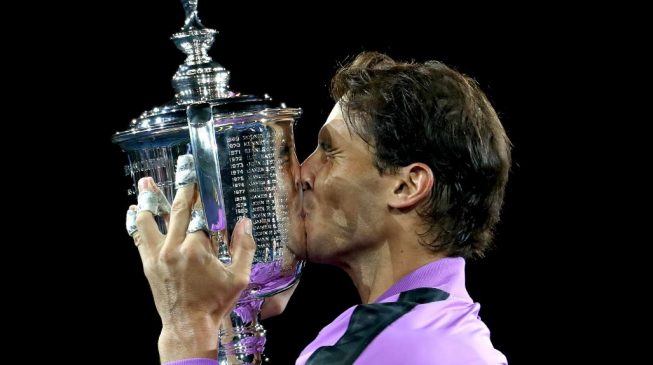 05:21 2019
Print This Article Share it With Friends
👤by Jonathan Ledger  0 Comments
Advertisement

Rafael Nadal defeated Daniil Medvedev 7-5 6-3 5-7 4-6 6-4 in a thrilling final of five sets at the Arthur Ashe stadium in Flushing Meadows.

He also became the first man aged 30 years and above to win five Slam titles, moving ahead of his archrivals, Federer and Novak Djokovic who both sit on four titles each.

Speaking after the triumph, the 12-time French Open winner reflected on an emotional tournament and thanked the crowd who had supported him throughout its duration.

“It has been one of the most emotional nights of my tennis career,” he started.”Thank you very, very much, everybody in this stadium. It’s been amazing energy during both weeks.”

Second-seeded Nadal, hoping to avoid the shock defeat Serena Williams suffered in the women’s final, raced into a two set lead but was pegged back by the determined Medvedev.

Nadal, 33, broke Medvedev in the crucial 12th game with impressive volleys and important rally triumphs to claim the first set 7-5.

The second was more straightforward for the Spaniard dressed in all-black outfit. He raced onto a 5-2 lead, aided by too many unforced errors by Medvedev to make it 2-0 sets lead in in the 9th game.

However, 23-year-old Russian would not roll over like the Rogers Cup final defeat to Nadal in August.

Medvedev, who has won more matches than anyone on tour this season- fifty- took hold of proceedings with impressive use of forehands and attacks towards the net to take the third and fourth sets.

He broke at crucial times in both sets- especially the 10th game of the fourth- to set up a deciding fifth set.

However, Nadal, on a 10-match winning streak, triumphed in the decider due to a combination of Medvedev’s medical time-out which helped him restrategize and his own unsportsmanlike antics.

These included time-wasting on his serves, claiming disturbance from a crowd that mostly rooted for him and also feigning unpreparedness after his opponent had served.

He would race to another 5-2 lead and despite the best efforts of Medvedev, Nadal closed out the set 6-4 to claim his 84th ATP career title.

APC on Uzodinma’s victory: We are confident other stolen mandates will be restored