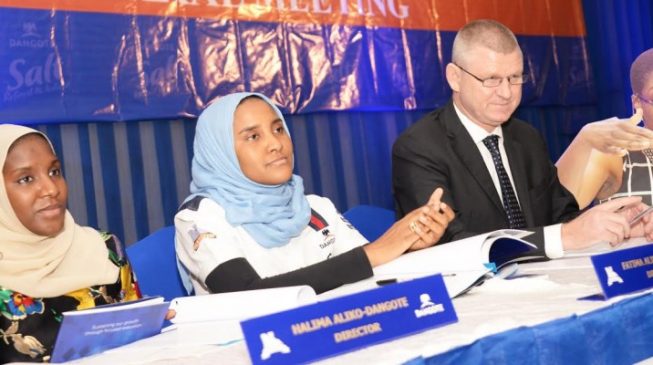 11:06 2018
Print This Article Share it With Friends
👤by Mike 'Uzor  0 Comments
Advertisement

NASCON Allied Industries isn’t running with the high speed gear on sales that it engaged last year. Sales revenue was flat at the end of half year trading, a sharp turn from a top record growth of 50% at the end of 2017 – the strongest revenue growth in the past five years. The leap in sales revenue led to a big harvest for shareholders in 2017 with after tax profit more than doubling to N5.34 billion.

The reverse is the case for the company so far this year with slowly moving sales constraining profit performance. A stronger second half needs to be achieved for the company to head off profit drop at full year.  NASCON Allied Industries produces and sales edible, refined, bulk and industrial salt, food seasoning, tomato paste and vegetable oil and also operates freight services.

It closed half year operations in June with sales revenue of N12.82 billion, a flat growth over the revenue figure of N12.72 billion in the same period last year. Sales revenue from consumer goods – the main revenue line of the company declined while an increase in freight service income prevented overall turnover from declining.

Sales revenue growth needs to accelerate in the second half of the year even to maintain the flat growth performance to full year. Based on the half year growth rate, sales revenue is headed for a drop at the end of 2018. NASCON Allied Industries had grown sales revenue by 50% to N27.1 billion in 2017.

Cost of sales inched down to N8.66 billion during the review period, which provided the strength for a 4% improvement in gross profit at N4.16 billion. Another strength came from investment income, which multiplied more than four times to N354 million at the end of June 2018.

After tax profit amounted to N2.20 billion for NASCON Allied Industries at the end of half year operations in June – a year-on-year growth of 12.4%. That growth rate isn’t likely to be maintained to full year without a strong improvement in the second half of the year. The full year outlook indicates a likely drop in profit from the 2017 peak of N5.34 billion for NASCON Allied Industries in 2018.

The company was able to attain a new profit high last year with a big leap of 120% since after it suffered a profit drop in 2014. The three-year recovery and growth trend since 2015 however looks likely to be interrupted with the slowdown in revenue and profit performances so far this year.

The company has quite low balance sheet debts, good margins, a robust cash balance despite a sharp fall in net cash generated from operating activities. Its operating challenge centres on the inability to grow sales revenue. Its earning story isn’t likely to change much at full year unless there is a significant improvement in sales revenue performance.

NASCON Allied Industries could still turn the half year slowdown into a strong growth record at full year. Its critical quarters seem to lie in the second half of the year. Last year, it generated 53% of its sales revenue and earned over 63% of it after tax profit in the second half.