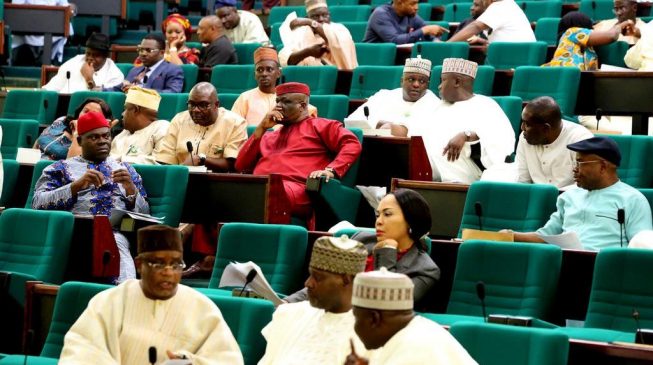 19:36 2018
Print This Article Share it With Friends
👤by Dyepkazah Shibayan  0 Comments
Advertisement

Enough is Enough Nigeria (EIE), a civil society organisation, says the N125 billion budget of the national assembly in 2017 was higher than of those of 10 states in the country.

Adeolu Adekola, programme director of EIE, said this on Wednesday while addressing a press conference in Abuja.

Adekola said they wrote to the leadership of the national assembly and then Acting President Yemi Osinbajo that the budget should be reduced to N52.5 billion but there was no acknowledgement or response.

He expressed surprise that the national assembly increased its budget by N14.5 billion in 2018.

“To further disdain the Nigerian people, the national assembly’s 2018 budget was increased by 14.5 billion to N139.5 billion. This seems to instutionalise the additional N10 billion that was released to the national assembly in 2017 by the former minister of finance, Kemi Adeosun, making their total budget N135 billion,” the programme director said.

“Despite promises to ensure their budget is public as standard practise and several requests from campaign, the national assembly has refused to publish the details of their 2018 budget. It should be noted that the national assembly’s budget is a statutory transfer and not subject to the revenue performance of the country.

“With senator Shehu Sani’s N13.5 million running costs disclosure,  questions need to be asked regarding what these monies are used for.”

Adekola frowned at the non-usage of electronic voting when the two houses of the national assembly voted on the amendment of constitution in July.

He added that the national assembly is a critical institution for the country’s democracy and it should serve not just a few people but all Nigerians.

TWITTER @thecableng
Copyright 2020 TheCable. All rights reserved. This material, and other digital content on this website, may not be reproduced, published, broadcast, rewritten or redistributed in whole or in part without prior express written permission from TheCable.
Tags
budgetEnough is Enough Nigeria (EiE)national assembly
Advertisement