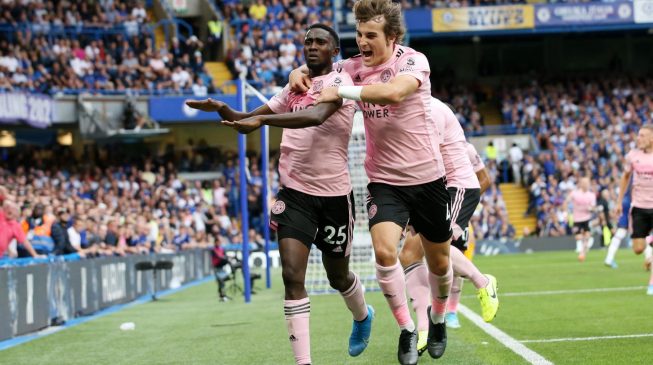 20:18 2019
Print This Article Share it With Friends
👤by Jonathan Ledger  0 Comments
Advertisement

Wilfred Ndidi, Super Eagles midfielder, was first villain, then hero for Leicester City in their 1-1 draw against Chelsea at the Stamford Bridge in London to extend Frank Lampard’s managerial headache.

Lampard who returned empty-handed from Old Trafford last Sunday, after a 4-0 thrashing at Manchester United was hoping to recover with a win at Stamford Bridge against Leicester City — but Ndidi made that impossible with a 67-minute goal.

Ndidi made a mistake which led to Chelsea taking the lead in the seventh minute, but the determined midfield enforcer redeemed himself in the second period with the equalizer.

The 22-year-old former Genk of Belgium player collected a pass from Johnny Evans on the edge of his penalty area but lack of awareness meant he was unaware of two players pressing him.

He took too many touches and was stripped of the ball by 20-year-old Chelsea attacking midfielder, Mason Mount, who slotted into the bottom corner for Chelsea’s goal.

The combative, ball-winning midfielder almost made amends in the 37th minute but he was just inches away from stabbing in a free-kick delivery as Chelsea took a 1-0 halftime lead.

Ndidi finally did in the 67th minute, rising above Chelsea captain, Cesar Azpilicueta, to nestle a fine header into the roof of the net from James Maddison’s corner-kick delivery for Leicester’s deserved equalizer.

Madison and Jamie Vardy would miss clear-cut chances to complete the turnaround as Leicester made it two draws in their opening games of the season.

Ndidi, who won the Leicester City young player of the year award for two consecutive seasons, played all 38 league games last season, scoring two goals, and has now featured for 90 minutes in both games played in the new EPL season.

While Wilfred Ndidi was all business at both ends of the Stamford Bridge pitch in Leicester City’s draw with Chelsea, his compatriot and teammate, Kelechi Iheanacho, was rooted to the substitutes bench for the entire game.

The former Man City youngster has not featured for Brendan Rodgers’ side this season.

The story was the same for Alex Iwobi at Goodison Park, the attacking midfielder was not in action as Everton defeated Watford 1-0.

Iwobi, 22, signed on deadline day was on the bench as the AFCON 2019 bronze winner works his way back to fitness after a grueling summer.

Eagles winger, Isaac Success was, however, not listed for Watford in the loss.

It was the same story for Leon Balogun at Brighton and Hove Albion; the 31-year-old central defender was not listed in the home side’s 1-1 draw with West Ham, has now been awol in both games of the season.

It was an entertaining game in the clash of the week at the Etihad stadium where EPL champions, Manchester City, were pegged back by a combination of Tottenham Hotspur and VAR to a 2-2 draw.

In a match that produced 30 shots for City, Kevin de Bruyne ran the show and provided the assists for goals scored by Raheem Sterling and Sergio Aguero.

Tottenham equalized on both occasions they went behind through Erik Lamela and Lucas Moura, their only shots on target. But the Londoners were lucky to leave Etihad with a point, VAR coming to their rescue in added time.

Substitute striker, Gabriel Jesus bundled home but the goal was disallowed due to a handball by a defender, Aymeric Laporte, in the build-up.

A frustrated Jesus, who had wildly celebrated, remonstrated while it was a relief for Tottenham who were second-best throughout.