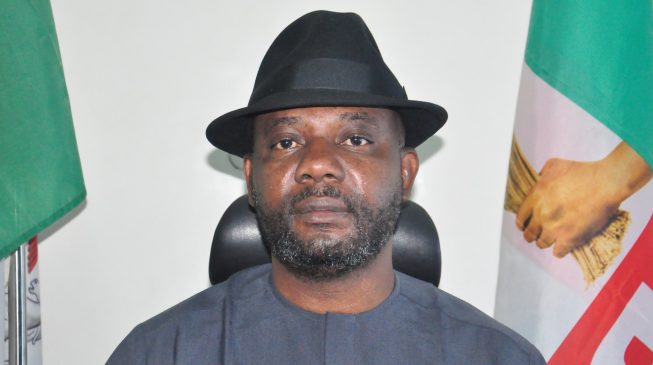 16:17 2019
Print This Article Share it With Friends
👤by Haleem Olatunji  0 Comments
Advertisement

Yekini Nabena, deputy national publicity secretary of the All Progressives Congress (APC), has asked  President Muhammadu Buhari to intervene in the ongoing face-off between leaders of the party.

Nabena said Buhari’s intervention in the disagreement between Adams Oshiomhole, national chairman of the party, and John Odigie-Oyegun, his predecessor, is necessary to avoid a weakening of the party’s foundation.

Oyegun had accused his successor of lacking the capacity to lead a political party in the 21st century.

Lanre Issa-Onilu, APC spokesman, fired back at the former chairman, saying he is responsible for the indiscipline and impunity in the party.

In a statement on Wednesday, Nebena called on Buhari and other leaders in the party to put an end to the face-off.

“The losses the APC suffered during the 2019 General Election in some states which we previously controlled is indeed worrisome. However, we are still the governing party which produced the President; control majority states and have an overwhelming majority in the National Assembly,” he said.

“Compared to the failed Peoples Democratic (PDP), the APC remains the political party of choice for both Nigerians and politicians. I urge our aggrieved members to remain in the APC fold and settle their differences. In fact, in a few months, we expect a huge influx from members of the rudderless PDP and other political parties into the APC.

“Elections have been won and lost. High-level meetings such as National Caucus and the National Executive Committee (NEC) are there to address party matters.

“I call on our respected leaders, particularly the current and immediate-past National Chairmen to end their public hostilities, particularly in the media for the sake of the party and focus on the important task of forming government at the state and federal levels to deliver on our Next Level mandate. We need a united house to ensure the growth and strength of our party.

“In the immediate, I call on President Muhammadu Buhari as the leader of our party to lead fence-mending efforts and address obvious grievances in many states and among stakeholders in the party.”

TWITTER @thecableng
Copyright 2020 TheCable. All rights reserved. This material, and other digital content on this website, may not be reproduced, published, broadcast, rewritten or redistributed in whole or in part without prior express written permission from TheCable.
Tags
Adams OshiomholeAPCJohn Odigie OyegunMuhammadu BuhariYekini Nabena
Advertisement