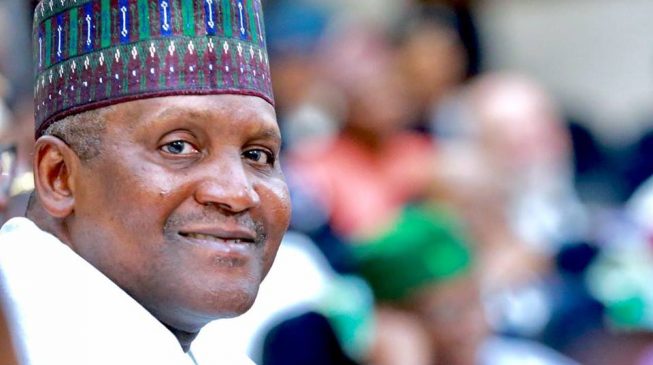 11:09 2018
Print This Article Share it With Friends
👤by Mayowa Tijani  1 Comment
Advertisement

Aliko Dangote has revealed that at 61, he is not getting any younger, and he is willing to take on a new wife.

Speaking with David Piling in a Financial Times interview, Lunch with FT, the multi-billionaire, who is Africa’s richest man, revealed a soft side of himself and talked tall about his ambitions to buy Arsenal Football club after successfully leading Nigeria’s oil refining revolution.

Dangote revealed that his schedule is inhibiting romance. The founder of Dangote Group, who is twice divorced and has three grown-up daughters, told FT that he is on the lookout for a new bride.

He however adds a caveat: “I’m not getting younger. Sixty years is no joke. But it doesn’t make sense to go out and get somebody if you don’t have the time. Right now, things are really, really very busy, because we have the refinery, we have the petrochemicals, we have the fertiliser, we have the gas pipeline.”

But he agrees that he needs to “calm down a bit”.

FASTS AT LEAST ONCE A WEEK

TAKES MORE THAN 100 CALLS A DAY

As expected, Dangote has a very busy schedule, but who would have guessed that he may also be one of Africa’s busiest, taking over 100 calls per day.

Speaking of his relationship with Tony Blair, former British prime minister, Dangote says Blair only makes three calls per day. But he has to battle with scores, and tonnes of emails.

About his mails, he says: “you try to be polite and reply but they come back to you with a longer email, not minding that here is a very, very busy person”.

“Look Aliko, the world is not going to fall apart if you don’t answer your phone,” Dangote says of his golden advise from Blair.

NIGERIA TO BE THE LARGEST EXPORTER OF PETROLEUM PRODUCT

The serial-entrepreneur says once his $12 billion refinery is done, Nigeria will for the first time in her history, become Africa’s biggest exporter of petroleum products.

“When we finish this project, for the first time in history Nigeria will be the largest exporter of petroleum products in Africa,” he said.

NIGERIA IS TOUGH; ONLY THE TOUGHEST SURVIVE

The man with the most amount of the money in Nigeria — officially — says only toughest of the tough survives in Africa’s largest economy.

Dangote say with his new refinery, he is out to make new enemies, stating that “you can’t just come and remove food from their table and think they’re just going to watch you doing it”.

“They will try all sorts of tricks. This is a very, very tough society. Only the toughest of the tough survive here”.

The Kano-born billionaire is not happy with Nigeria’s inability to produce what she eats, locally, and wants some hard policies to stop importation of some products.

“Nigeria still imports 97 or 98 per cent of the milk that we consume. The government needs to bring out a draconian policy to stop people importing milk, just like they did with cement.”

STILL OUT TO BUY ARSENAL

Dangote is not a man known to give up on his dreams, and his dreams about Arsenal Football Club will not be different, he reveals.

“I love Arsenal and I will definitely go for it,” he told FT, adding that the club should be worth about $2bn.

Speaking as the owner of the club, Dangote said he would involve himself in rebuilding the team — “chipping in my own advice”.

“When I buy it, I have to bring it up to the expectations of our supporters,” he said, stating that his refinery is priority now. “Once I have finished with that headache, I will take on football,” he concludes.

TWITTER @thecableng
Copyright 2019 TheCable. All rights reserved. This material, and other digital content on this website, may not be reproduced, published, broadcast, rewritten or redistributed in whole or in part without prior express written permission from TheCable.
Tags
aliko dangoteFinancial Timesnigeriaoil
Advertisement