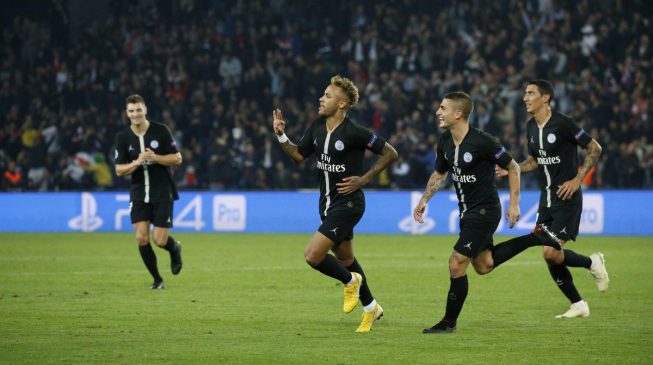 23:03 2018
Print This Article Share it With Friends
👤by Jonathan Ledger  0 Comments
Advertisement

Neymar and Lionel Messi were the stars on Wednesday as Paris Saint-Germain and Barcelona earned commanding wins. Atletico Madrid and Borussia Dortmund also emerged winners but Liverpool lost at Napoli.

Brazilian maestro, Neymar, was at the heart of an imperial performance as PSG steamrolled Red Star Belgrade to earn their first points of the UCL season. The French league champions scored four goals in a one-sided first half to show the gulf in class.

Edison Cavani’s deflected shot made it three while Angel di Maria added the fourth. The impressive Mbappe added the fifth, finishing off a slick team move for his 27th goal on his 50th appearance.

Although the visitors got a consolation goal through Marko Mari, Neymar had the final say just the same way he started- another free kick- for his 30th goal in Europe, equalling Kaka’s record for a Brazilian in the competition.

Lionel Messi scored twice to make it five UCL goals in two matches as he inspired Barcelona to a 4-2 win over Tottenham at Wembley.

Tottenham made a disastrous start, conceding in the second minute when goalkeeper, Hugo Lloris, dashed off his area to stop Jordi Alba from receiving the ball on the wing, leaving the post unguarded. The Spanish defender managed to nick a pass to Coutinho who blasted beyond a sea of bodies from 20 yards to score on his return to England.

While Spurs were beginning to settle, Barcelona hit them with a sumptuous second through Ivan Rakitic’s first-time bouncing volley on 28 minutes.

Tottenham halved the deficit early in the second half through striker, Harry Kane, who scored from a sniff of goal. The World Cup golden boot winner received a pass from Heung-Min Son, left Semedo for dead before scoring his 10th UCL goal in 12 games.

The Argentine would have the last word with a tap-in from six yards in the final minute to end the game 4-2 in favour of the Catalans, their first win in three matches.

Atletico Madrid battled past the Belgians through an Antoine Griezmann brace. The Frenchman converted a Thomas Lemar cross on 27 minutes but Club Brugge pegged Diego Simeone’s side back with a long range strike from Nigerian-born Dutch youngster, Arnaut Danjuma, late in the first half.

Griezmann got his brace early in the second half while he crossed for Koke to make it 3-1 in the final minutes of the match.

TWITTER @thecableng
Copyright 2020 TheCable. All rights reserved. This material, and other digital content on this website, may not be reproduced, published, broadcast, rewritten or redistributed in whole or in part without prior express written permission from TheCable.
Tags
Lionel MessiNeymar JrPSGUEFA Champions League
Advertisement

APC on Uzodinma’s victory: We are confident other stolen mandates will be restored