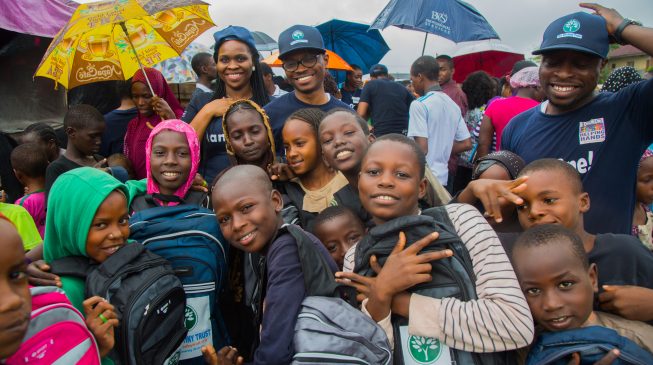 17:23 2019
Print This Article Share it With Friends
👤by Haleem Olatunji  0 Comments
Advertisement

The Destiny Trust, a non governmental organisation, has launched #1000HelpingHands campaign to seek the support of the public in removing barriers to free education for children of the extreme poor.

In a statement by Sanmi Abiodun, its head of communication and strategy, the organisation said removing barriers to tuition-free education will help in reducing the rising number of out-of-school children.

“At The Destiny Trust, we are committed to eliminating barriers to education for children of the extreme poor and in particular homeless children. We are worried that Nigeria is home to the largest population of out-of-school children globally,” the statement read.

A demographic health survey (DHS) conducted by the United Nations Children Fund (UNICEF) in collaboration with the federal government had shown that the number of out-of-school children rose from 10.5 million in 2010 to 13.2 million in 2015 in Nigeria.

Abiodun called on Nigerians to support homeless children to avoid missing school activities due to lack of financial capacity to provide essential needs for schools.

He said the group will also support under-resourced schools that admit the largest number of beneficiaries, through the proceeds generated from the campaign.

“Tuition-free education alone is not enough to provide children of the extreme poor with access to education. Many children will remain out of school due to lack of financial capacity to provide essential school needs such as uniform, books and writing materials in addition to enrolments requirements such as tax clearance and proof of registration as resident of the state,” the statement read.

“Children in urban areas whose parents work in informal sector jobs, who are not captured in the tax net and who have no stable home or address will also not have access to free education except deliberate efforts are targeted at removing these barriers and ensuring their inclusion in the education system.

“While holding the government accountable for her declared commitment to address the problems of education as an emergency, ordinary people can also play a part towards providing opportunities to some of those around us.

“Through the #1000HelpingHands campaign, we are drawing attention, once more, to the peculiar problems homeless children face in accessing the education system and also driving a community effort to enrol or reintegrate more children into schools. Every year, hundreds of out-of-school children receive essential school needs with the proceeds of this annual crowdfunding.

“We want to be there for them again this year putting more out-of-school children in school and assisting those who may have dropped out of school to go back to school this September. With the proceeds of the campaign, we also support under-resourced schools that admit the largest number of beneficiaries.

“We are calling on good citizens to support this cause by donating and encouraging people within their social network to donate in order to give the opportunity to support the education of more children through the contribution of about 1000 people. We also seek to partner with organizations who share our passion to combat the blight of illiteracy amongst the poorest of the poor.”

TWITTER @thecableng
Copyright 2020 TheCable. All rights reserved. This material, and other digital content on this website, may not be reproduced, published, broadcast, rewritten or redistributed in whole or in part without prior express written permission from TheCable.
Tags
free educationout-of-school childrenThe Destiny Trust
Advertisement