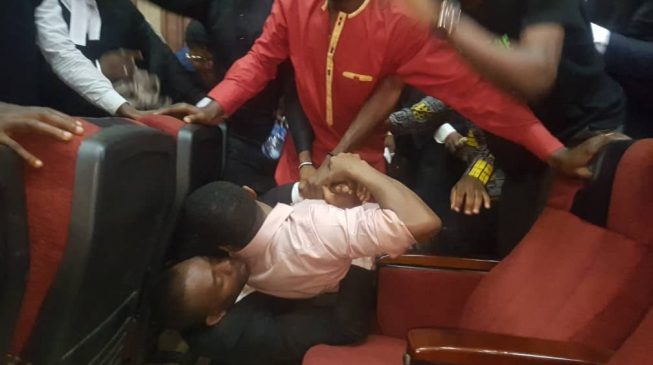 14:42 2019
Print This Article Share it With Friends
👤by TheCable  0 Comments
Advertisement

The National Human Rights Commission (NHRC) has asked the federal government to arrest and prosecute the Department of State Services (DSS) operatives who broke into the court to rearrest Omoyele Sowore, convener of RevolutionNow Movement.

Sowore, who had been in detention since August 3 was released after 124 days but less than 24 hours after he regained freedom, armed DSS stormed a federal high court, Abuja, to rearrest him.

His lawyers and supporters had initially resisted the attempt to pick him but the secret police eventually picked him up,

This had sparked outrage within and outside the country.

Reacting in a statement on Saturday, the commission said the DSS operatives must be made to know that they are not above the law.

“The National Human Rights Commission has watched with dismay the conduct of law enforcement officers in facie curie yesterday Friday 6th Dec 2019 at the Federal High court Abuja and reiterates it’s earlier statement emphasising the need for law enforcement officials to understand that to qualify as law enforcement agents, they must first of all be law-abiding and not be above the law,” he said.

“Our democracy is founded on the principle of separation of powers and all citizens including law enforcement officials must understand the implications of that and are enjoined to respect the law and the constitution in the enforcement of the law.

“Accordingly, the commission directed all the relevant agencies of government to arrest and try all law enforcement officers involved in the desecration of the hallowed chambers of the Federal High court Abuja on Friday 6th Dec 2019 for contempt in the face of the court.”