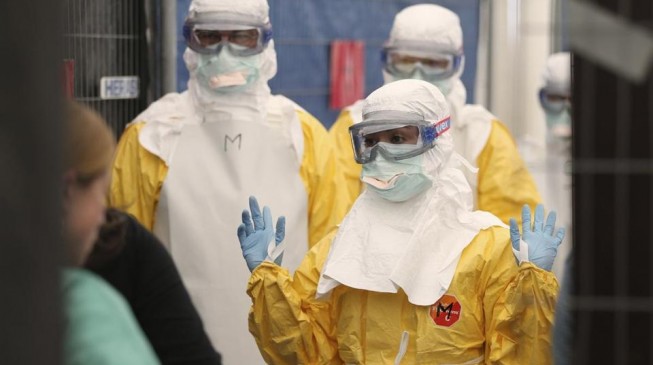 17:57 2019
Print This Article Share it With Friends
👤by Chinedu Asadu  0 Comments
Advertisement

The house of representatives has warned that Nigeria may experience another Ebola virus crisis if necessary measures are not put in place.

At Tuesday’s plenary session, the lawmakers said the federal government is not doing enough to prevent another outbreak despite Nigeria’s proximity to DR Congo where the virus is still prevalent.

It also asked the government to confer a posthumous national honour on Stella Adadevoh, the late physician who played an active role in containing the spread of the virus when it was recorded in Lagos in 2018.

This followed the introduction of two motions on the matter; the first on the need to put adequate measures regarding the “looming reoccurrence” of the Ebola crisis in Nigeria, and secondly, on the need to honour Adadevoh.

An Ebola virus outbreak was declared in DR Congo on August 1, 2018, and there have been 3,114 confirmed cases and 2,123 deaths, according to the World Health Organisation.

Paschal Obi, chairman of the house committee on health institutions who sponsored the first motion, said although relevant agencies stepped up to stop the spread of the virus in 2018, little or nothing is being done now.

He said: “The house is worried that given the proximity of the Democratic Republic of Congo (DRC) to Nigeria and other West Africa countries, if necessary measures are not put in place to prevent the reoccurrence of the pandemic in a densely populated country like Nigeria, the impact may worsen and become difficult to curb;

The green chamber urged the federal ministry of health to deploy necessary materials and personnel at the all the airports as well as other routes including land borders for proper screening of individuals.

It also asked the government to set aside funds for the management of Ebola virus in in the event of its reoccurrence in Nigeria.

TWITTER @thecableng
Copyright 2020 TheCable. All rights reserved. This material, and other digital content on this website, may not be reproduced, published, broadcast, rewritten or redistributed in whole or in part without prior express written permission from TheCable.
Tags
DR CongoebolaFGhealthhouse of reps
Advertisement